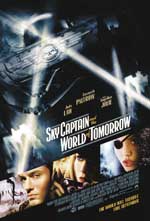 Sky Captain And The World Of Tomorrow 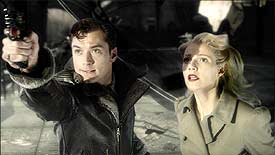 Famous scientists around the world have mysteriously disappeared and Chronicle reporter Polly Perkins (Paltrow) along with ace aviator Sky Captain (Law) are on the investigation. Risking their lives as they travel to exotic places around world, can the fearless duo stop Dr. Totenkopf, the evil mastermind behind a plot to destroy the earth? Aided by Franky Cook (Jolie), commander of an all-female amphibious squadron, and technical genius Dex (Ribisi), Polly and Sky Captain may be our planets only hope. (from MovieWeb.com)

Sky Captain And The World Of Tomorrow was one of those summer movies that you didn't expect much after viewing the trailer. In fact, I wondered why in the world Jude Law, Gwenyth Paltrow, and despite the fact she stooped so low as to do TWO Tomb Raider movies, Angelina Jolie would appear in such a film. Well, on September 17th, due to much critical acclaim, I decided to let my curiosity get the better of me. And I'm glad I did.

Sky Captain And The World Of Tomorrow is one of the most unique films I've seen in years. Using almost entirely just a blue screen for every scene to insert the actors into imaginative settings, the feel of the film is unlike any other. Sky Captain has a B-movie, classic silver screen aura. From the grayish, brown hues of much of the film's backgrounds and the old fifties-style wardrobe and backdrops, it's a throwback to some of the more fun film eras. With a feel of Raiders Of The Lost Ark meets Star Wars or Buck Rogers with a few elements of Iron Giant and The Rocketeer, Sky Captain will remind you of a bunch of other films and shows yet feel all its own at the same time. In fact, in a way, you feel like you've known the character of Sky Captain for years. 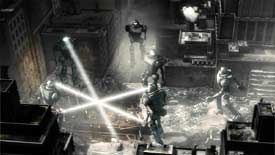 Sky Captain And The World Of Tomorrow is a visually stunning film. It may sound cheesy at first for there to be a film that is almost entirely CGI graphics with actors tossed in, but it works to the film's benefit here. The character of Sky Captain, Joe, played by Jude Law, has the look and feel somewhat of a Tony Curtis meets Indiana Jones and it works. Polly, played by Gwenyth Paltrow comes across more like a Lois Lane type but bears her own personality and quirks. And giving the film an almost James Bond angle, the character of Dax, played by Giovanni Ribisi, is sort of a Q (or more recently, R) character who supplies Sky Captain with the cool gadgets, gizmos, and souped-up vehicles.

In the content department, the only things Sky Captain has against it is some violence and a couple mild cuss words (see below details), but overall is a decent family film. Movies this fun and imaginative are rarities these days so this one shouldn't be overlooked. Director Kerry Conran, who makes his debut with Sky Captain, does a marvelous job giving the audience a brand new character helming from a brand new world. Taking the audience from land to air to sea, adding new and exciting spins and surprises to each aspect really makes this film a fun treat. While it may fail a few times in the originality department or never really rise above all the films one could compare traits of it to, it still is well worth a look.

All in all, I found Sky Captain And The World Of Tomorrow to be a big surprise at the end of this year's Summer movie season. It's not a perfect film, but extremely enjoyable no less, Sky Captain And The World Of Tomorrow could very well be the start of a promising new film franchise. And to be honest, I sure hope it is. - John DiBiase (reviewed: 9/25/04)

Sex/Nudity: A few innuendo remarks. Mostly just banter between Joe and Polly with her accusing him of cheating on her in the past (an argument that continues throughout the movie). We see Joe and Polly wake up in bed together apparently nude under the covers. It appears they may have slept together (especially because of the grin on Joe's face), however, Polly looks on the other side of her to find Kaji in bed with them too. We soon learn that nothing sexual occured at all, and they were taken in by natives of the country with their clothes burned due to contamination of some sort.

Alcohol/Drugs: It looks like Joe's pouring himself a drink from a bottle of alcohol but it ends up being milk of magnesia.

Blood/Gore: We see a grotesque looking man who's been tortured, experimented on by Totenkopf, thus his skin is deformed and wrinkly. We see a man fried by a machine that reduces his body to a skeleton (in a comic-style, non-bloody or gory way). We see a man who is decomposed and somewhat mummified as he's been dead for years. We see a person's face torn revealing a robotic face beneath (it's not gory, just may be disturbing to some). Joe has a little bit of blood on his face.

Violence: Large robots attack New York, blow up buildings, etc. Mostly comic-style / sci-fi violence. Disclaimer: All reviews are based solely on the opinions of the reviewer. Most reviews are rated on how the reviewer enjoyed the film overall, not exclusively on content. However, if the content really affects the reviewer's opinion and experience of the film, it will definitely affect the reviewer's overall rating.