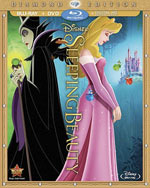 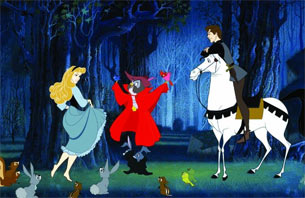 Adaptation of the fairy tale of the same name. Princess Aurora is cursed by the evil witch Maleficent - who declares that before Aurora reaches her 16th birthday she will die by a poisoned spinning-wheel. To try to prevent this, the king places her into hiding, in the care of three goodnatured - but not too bright - fairies. (from Movieweb.com)

When you think of classic Disney animated fairytales, one of the quickest to come to mind is probably the 1959 feature, Sleeping Beauty. This year, Disney created a live action theatrical epic advenure centered entirely around the villain of this film, Maleficent, starring Angelina Jolie as the title character. While I haven't yet seen that film (hopefully you'll see a review on here soon), I decided to take the opportunity to revisit Sleeping Beauty.

I honestly don't know how long it's been since I've seen Sleeping Beauty, but I imagine it was when I was quite young (if I've seen it at all, really). Given that it's about a princess, it's not usually on the must-see list for a young boy, but as an adult who has since gotten deeper into a love of art and cinema, I can view a film like Sleeping Beauty through a different set of eyes. Like many of the films from around this era--like Peter Pan or Robin Hood--these movies were made with an entirely different audience in mind than today's audience. Animated films today are fast and furious, silly, and packed with lots happening for much of the movie. Sleeping Beauty, like the others, is a lot slower, paced more thoughtfully, and is all about its story and not as much about just trying to attack the viewer with engaging visuals. Surely, entertainment was an important part of something like Sleeping Beauty, but it really represents a completely different generation of viewers and filmmaking.

Sleeping Beauty tells a little bit of a reverse-Moses-type story, something I've never realized before. A king and queen have a daughter born to them, and as blessings are spoken over her (some magical, of course), the evil Maleficent comes to curse little Aurora to die on her 16th birthday. Three fairies take the appearance of human nannies and take Aurora into the woods to raise her as their own and keep her out of the watchful eye of Maleficent in attempts to keep her from her pending doom. Aurora grows up with the name Rose, not knowing she's a princess--and destined to marry Prince Phillip--and meets Prince Phillip while walking in the woods on her 16th birthday. The two fall in love and Maleficent manages to find her, getting her to fall into a deep sleep (a counter-spell of the fairies so that she sleeps instead of dies). It's then up to Phillip and the fairies to save her and restore her title as princess.

While revisiting Peter Pan, and even Robin Hood to a degree, I was surprised by the sluggish pacing and weird plot elements. Sleeping Beauty is a stronger film as a whole, with good songs, a trio of lovable fairy godmothers and great characters. While Phillip is rather dry (he's surely no Flynn Rider from Tangled), he still represents a pure goodness to thwart the absolute evilness of Maleficent. I found the weirdest part about Sleeping Beauty, however, to be the presence of these pig-like minions of Maleficent. They're meant to be kind of goofy, but there's one jarring scene where they're dancing around a green fire in this temple-like place. It's creepy and maybe even a little disturbing. I get that it's meant to be a little unsettling and illustrate the evilness of Maleficent, but it feels out of place with the rest of the movie. Also, the moment where Maleficent lures Aurora to fulfill the curse is a little spooky too. She sort of sleepwalks to the ghostly sound of Maleficent's voice calling for her. The finale finds Maleficent turning into a large dragon to fight Prince Phillip and that, too, may be a little scary for some kids.

I was kind of surprised at how much I enjoyed Sleeping Beauty compared to some other Disney classics I've seen recently. It's not perfect by any means, but the good versus evil fight is admirable, and the lines between good and evil are very, very defined. If "magical" stuff makes you or your kids a little uncomfortable, I'd steer clear of this one. But if you're a fan of the Disney's Sleeping Beauty, make sure you don't miss its Diamond Edition release.


The Blu-Ray debut of Sleeping Beauty offers a DVD along with it and a digital copy. It's also available in just a plain DVD release. The film made its Blu-Ray debut in 2008 (which is now out of print), and this Diamond Edition adds a few more extras and is clearly timed to coincide with the release of Angelina Jolie's Maleficent. The presentation of the movie is in widescreen and the clarity, color, and detail is really beautiful. Along with the feature film are a few new extras, in addition to the bonus features from the film's original Blu-Ray release.

Deleted Scene: The Curse Fulfilled (2:58) - These are animated storyboards of a deleted scene where Aurora meets Maleficent posing as a creepy old woman sitting at a spinning wheel. She tells Aurora that it is a special wishing wheel and gets her to wish on it, causing her to fulfill the curse.

Alternate Scene: The Arrival of Maleficent (1:58) is another storyboarded sequence that just shows an alternate version of the evil witch's debut.

Deleted Scene: The Fair (7:48) - This is a long one. It's really an alternate plotline where there was a spell put on the castle to protect Aurora, so she never leaves the castle. But, of course, she eventually swaps clothes with a maid servant and goes to a fair. There, Maleficent tries to trick her. It's also there that she meets the prince.

Once Upon a Parade (8:49) - This is pretty much a commercial for Disney World. In it, Modern Family's Sarah Hyland (I had no idea who she was until one of the kids calls her by her full, real name) leads a group of 5th graders through Disney World and they act completely unimpressed. She then tells them about the Disney Festival Fantasy Parade and how the fantasy films -- like Sleeping Beauty and Frozen -- lend to the story of the parade itself. It's pretty awful, but it might be good for the kids.

The Art of Evil: Generations of Disney Villains (9:49) is a featurette that focuses on the art and legacy of animator Mark Davis, who created Maleficent. We hear from other animators (like the guy who created Aladdin's Jafar) as they reflect on Davis' influence. We also get to hear from Davis himself from a 1985 interview.

Disneyanimation: Artists in Motion (4:27) is about Visual Development Artist Brittney Lee (who worked on Wreck-It Ralph) and how she makes a 3D paper sculpture of Maleficent from scratch.

Classic Bonus Features: These appear to be the original Blu-Ray features about restoring it, making it, and "Eyvind Earle: A man and His Art."


Clip: Once Upon A Dream

Alcohol/Drugs: We see two kings drinking at a dinner. They pour some drinks and drink them while a minstrel sneaks a drink. We then see the minstrel totally drunk and drinking from his guitar.

Blood/Gore: Prince Phillip stabs a dragon and we see the sword sticking out of it with some blood slowly running down from the entry point.

Violence: Maleficent casts a spell on a baby girl that condemns her to death when she turns 16; The king has all spinning wheels burned and we see some in a pile burning; Maleficent zaps her minions with lightning bursts; The Kings fight each other with one holding a platter as a shield as the other hits it a big fish (played for laughs); Maleficent's minions attack and tie up Prince Phillip; We see the pig minions dancing around a green flame; The Prince fights them off with a shield and sword; The fairies turn Maleficent's bird into stone; Maleficent as a dragon fires on Phillip and he fights back with his sword. He eventually tosses the sword into her and she falls off a cliff. Disclaimer: All reviews are based solely on the opinions of the reviewer. Most reviews are rated on how the reviewer enjoyed the film overall, not exclusively on content. However, if the content really affects the reviewer's opinion and experience of the film, it will definitely affect the reviewer's overall rating.