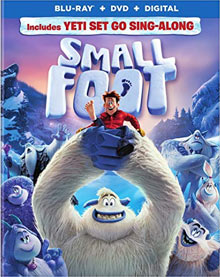 A Yeti is convinced that the elusive creatures known as "humans" really do exist. (from IMDB) 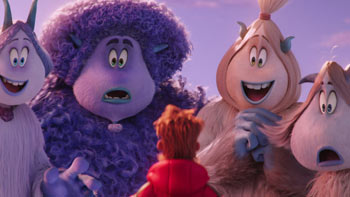 If there's one genre that likes to take ideas and legends and turn them on their heads, it's the animated family film genre. Toy Story presents the idea of what our toys are doing when we're not looking; A Bug's Life took an imaginative peek into the secret lives of insects; and Inside Out showed us what really goes on inside our heads. Smallfoot is Warner Bros. Animation's attempt at taking the legend of Bigfoot and spinning it around. While humans fantasize and theorize about the legendary Yeti, Smallfoot takes us to the world of the Yeti and how they have a similar legend about us humans--AKA "smallfoot." It's a concept that seems brilliant, and it mostly works, but its execution is unfortunately a bit lacking.

In all fairness, Smallfoot seems to be of the "acquired taste" variety. For one, it's more of a musical than your usual non-Disney generated fair. Granted, I don't really think this film fits the musical format. At times, it seems mildly appropriate for characters to breakout into song, but other moments just feel sorely mistimed. For the most part, though, the film's central talent of Channing Tatum and Zendaya prove to be up to the task, and they carry out their designated musical moments with ease.

Smallfoot's message is an interesting one. Obviously, it's about the Yeti discovering humans exist beyond rumor, with a small sect of them that have always believed in the legend of the smallfoot, but there seem to be deeper themes and messages here. For one, the leader of the Yeti tribe, the Stonekeeper, has long been perpetuating a large set of dogmatic rules that are in place to keep the Yeti segregated and "safe" from the rest of the world. The Yeti even believe that they are the ones who cause the sun to rise each day by someone propelling themselves headfirst into a gong every morning. As the story progresses, Tatum's character, Migo--and his friends--begin realizing a lot of their beliefs have been lies, and the entire belief system of the Yeti is in question. Several moments see the Stonekeeper encouraging his people to bury deep any questions they may have. Smallfoot seems like a commentary on faith and our own belief systems, and while questions can certainly be good in any belief system, I have to wonder about what the intentions of this story really are--if there are any beyond the surface.

Otherwise, Smallfoot is a pleasant enough family film. Any violence is mostly comedic and minor, and most of the humor is tame. The slightly more intense moments are mostly when the Yeti characters venture to the real world, but even those are pretty tame. The songs seem like they'll especially appeal to the younger audiences, while their contemporary stylings should also appeal to some adults. One scene, where Stonekeeper talks privately with Migo, is done entirely as a rap, and while it probably could have worked if handled differently, it just really feels out of place here. Common, who voices Stonekeeper, has never been known for his acting, and I was disappointed to find his rapping isn't all that great either (I'm unfamiliar with his regular music). Maybe the song just wasn't right for him, but the whole sequence just didn't seem to work.

I'd say the film is barely PG. I think Disney has put out more intense G-rated films. However, Smallfoot does include 1 use of "cr*p" and some mild bathroom humor (like having the Yeti believe that toilet paper is some kind of scroll of wisdom with invisible lettering). The violence is mild, too, but one scene that's played for laughs sees Migo getting his toe caught in a bear trap with one little tiny blood bubble popping up after the trap comes off, causing him to freak out. (Parents can relate to this, for sure.) When we meet Percy, we see a close-up of a spider that is on his face for an extended scene and then it jumps onto another person's face, causing them to freak out and run into a wall. It's all played for laughs, but for the arachniphobes out there, I thought you might appreciate the heads up.

Smallfoot is hardly a standout animated film for this year, but if you're a fan of any of the cast or you just really enjoy animated musicals, it's worth checking out. Personally, I'd recommend Ralph Breaks the Internet or Incredibles 2 long before Smallfoot, but those looking for some mostly harmless entertainment could certainly do worse than this tall tale.


Smallfoot is available on Blu-Ray/DVD/Digital, DVD, and through the usual digital providers. Along with the film in high definition, the Blu-Ray disc and digital services include the following extras:

Super Soozie Mini Movie (2:23) - In this new animated short, Soozie pretends to fly via being tied to a rope, and the other kids make fun of her for it. She then walks away sad till one of the kids gets into trouble while hanging on the rope, so she swings into action to save them.

Migo in the Secret of the Yeti Stones (3:44) - Migo narrates a cheesily animated synopsis of their lifestyle as Yeti.

Yeti or Not, Here They Come! Imagining Smallfoot (6:01) is the solitary making-of featurette on this disc. Here, we learn that they tried to channel Warner Classic animation (which surprised me, because the animation reminds me way more of Sony's Hotel Transylvania than anything else... however, I do see some Bugs Bunny in the eyes after finding that out). The cast and crew talk about the story and working on the film, as well as the musical aspects of it. We see some fun footage of the actors recording their dialog in the studio, too.

Yeti, Set, Go Sing-Along (1:38:06) - This is the feature film with an intro that explains that there are pop-up lyrics and fun material all throughout watching the normal film. So if you want to sing along, this is the way to watch the movie!

Music Videos - There are three music videos for songs in the film. First is Niall Horan's Finally Free (3:28), then Cyn's Moment of Truth (3:59) which is set to footage of her in the studio recording vocals mixed with clips from the film, and finally Wonderful life in 28 Languages, Sung Around the World (3:13), which opens in English with Zendaya singing, before moving on to all kinds of languages -- from Spanish to Italian, to even Estonian, Dutch, and Finnish!

Sex/Nudity: When we see some online trending videos, we see one of a "twerking pig" shaking its butt.

Alcohol/Drugs: Percy offers to buy the pilot a drink.

Blood/Gore: Migo accidentally knocks Percy's tooth out, so he opens Percy's mouth and drops it in; Migo's foot gets trapped in bear claw trap. When Percy gets it off of Migo's toe, a tiny drop of blood pops out.

Violence: We see a Yeti propel himself headfirst into a gong; A Yeti smashes open a fruit on their head. A little kid then tries it and falls over; Migo tries to launch himself into the gong and smashes into things and, one time, flies over a mountain; We see a plane on fire crash and bounce on the ground multiple times before slamming into Migo and crashing; Percy pretends a spider on his face has bitten and infected him. We then see the spider jump onto another guys face who freaks out and runs into a wall, smashing his video camera; A hawk tries to grab and drag away a goat but Migo throws snow at it, saving the goat; Migo then gets caught in the airplane wreckage and rolls down a mountain. Two large pieces of the mountainside fall over on him (it's slapstick); Percy is accidentally hit in the butt with a tranquilizer dart and passes out. Migo then accidentally knocks his tooth out, opens his mouth and drops it in; a blizzard tosses Migo around; Migo puts Percy on a stick over a fire to thaw him out but Percy thinks he is roasting him to be eaten; We see a bear angrily yelling at Percy and Migo; Migo's foot gets trapped in bear claw trap. When Percy gets it off of Migo's toe, a tiny drop of blood pops out; A Yeti accidentally hits Percy in the face; We see animated cave drawings of humans chasing away Yeti with guns and spears; Migo crashes headfirst thru a window into a wall; Percy is accidentally run over by a snow mobile (but he's okay); Meechee gets roped by human police and accidentally throws a car into a building; We see photos and images of hunters with dead animals, like bears; We see a scary piece of art of a fire-breathing angry-looking Yeti; Stonekeeper throws stones at helicopter, causing it to crash; Men on snow mobiles shoot tranquilizer darts and chase the Yeti; Percy shoots Migo with a tranquilizer dart. We then see what looks like Migo getting shot with another tranquilizer (or worse), but then runs off. We later find it's Percy in a suit. They shoot him, but he's okay since it's a suit; The Yeti go to meet with the humans, but they form a police/S.W.A.T. type barrier. It ends peacefully, however. Disclaimer: All reviews are based solely on the opinions of the reviewer. Most reviews are rated on how the reviewer enjoyed the film overall, not exclusively on content. However, if the content really affects the reviewer's opinion and experience of the film, it will definitely affect the reviewer's overall rating.