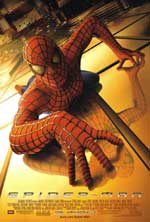 When Peter Parker (Tobey Maguire), a student in high school interested in science and photography and an outcast among his peers, visits a Science exhibit focused around radioactive super spiders, one gets loose and bites Peter in the hand. Immediately feeling sick, Peter rushes home to sleep, only to awake and find his body undergoing some bizarre changes -- he's beginning to develop the traits of a spider. As Peter begins to develop his new "powers," he's got his eyes set on a classmate named Mary Jane (Kirsten Dunst). Peter tries to find ways to turn his new gift into an advantage for himself. When he suddenly loses a loved one, he decides fighting crime in the city of New York the best way to utilize his powers. Things get a little more complicated for Peter when a supervillain, who is dubbed the Green Goblin (Willem Dafoe), surfaces in the city. Will it be Peter's new identity, Spider-Man, who will stop him?

I hate spiders. Anyone who has read these reviews knows that the case, but I just thought I'd make that known again. Hate isn't even the word for it, though... "Loathe" and "despise" more so come to mind. But with all the hype and the classic tale of the superhero, I decided to catch a showing of Spider-Man. What I saw was surprising. The movie did live up to its hype, but not only that, I think it's the best comic-book based film that I've seen. Sure X-Men was really good, and Batman, although dreadfully dark, was pretty good, but Spider-Man was more fun. It has the underdog superhero, the fun and excitement of a comic book story, and was kept realistic yet stylized enough to draw the viewer in and still be faithful to the story. Problems that later Batman flicks suffered were they were too "neon" -- too plastic. Big name stars couldn't even save the horrid Batman and Robin. Spider-Man is a great popcorn movie. You can sit back with your bucket and a large soda with friends and just enjoy 2 hours of well-organized relatively mindless fun. I found it visually exciting and really enjoyable. The movie had its slow points, but they were important to setting up the story which too many action/adventure films forsake these days.

Surprisingly enough the usually stale Tobey Maguire was excellent as Spider-Man. He was decent in films like Pleasantville, but here he played the perfect ordinary guy who becomes an extraordinary person. Kirsten Dunst was okay as his love interest. She didn't over-act or let the extent of her acting abilities be reduced to cries of distress, which obviously helped, but something about her character slightly lacked. The Green Goblin served as a good villain. It's my understanding that he is from the Spider-Man comic book series, but at times his costume seemed slightly cheesey. Although the producers did a good job putting life into the character, his costume seemed a little bit like something you'd find in a Power Rangers' episode. 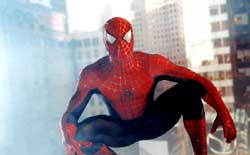 Spider-Man's costume was really cool. Although you don't get any expressions from his eyes or mouth with his whole head being covered, it wasn't that crucial, and instead added to the mysterious nature of his character.

Content-wise, the film wasn't too bad. Language was mild with a few uses of the "a" word and a few uses of "h*ll," (and one use of J*sus' name). Violence was the biggest factor. Although there wasn't much graphic violence, there was a lot of action centered around Spider-Man kicking a lot of criminal tail. There's a little bit of blood when a blade slices Spider-Man's arm and later we it a drop of blood drip onto the ground and then later see the cut dried up. Also, we see some blood on Spider-Man's face during a fight, and in a man's mouth after he dies. For those who are squeamish about spiders, there's a sequence where Peter goes to a science exhibit about spiders where there are many shown, and close-up (for several minutes). When the radioactive spider bites his hand, we see a close-up shot of the actual act of him being bitten as well as later see the swollen mark on his hand.

All in all I was really impressed by this film. I thought it was excellent and well-done. It's not for everyone, but it's a fun trip to the theaters. Take friends and check out Spider-Man. However, it's probably too intense for the young ones.

Sex/Nudity: There isn't much beyond a couple passionate kisses. In one extended sequence, MJ gets caught in the rain and her clothes cling to her body making moderately revealing.

Blood/Gore: We see a radioactive spider bite Peter's hand (shown in a close-up) and we later see a swollen mark where he was bitten. We see a bloody cut on Spiderman's arm after a blade has sliced him. Later we see a drop of blood fall from the wound and splatter on the ground. The Green Goblin tosses a bomb into a small crowd that turns several men into skeletons before vaporizing. During a battle, Spiderman's face is slightly bloody and another man has some blood in/running from his after being killed.

Violence: A lot of action/comic book related violence. This includes, but is not limited to, some fist-fights, punching, brawling, explosions (some resulting in non-graphic deaths). We learn that a man has been shot, but don't see the actual shooting; etc. Disclaimer: All reviews are based solely on the opinions of the reviewer. Most reviews are rated on how the reviewer enjoyed the film overall, not exclusively on content. However, if the content really affects the reviewer's opinion and experience of the film, it will definitely affect the reviewer's overall rating.