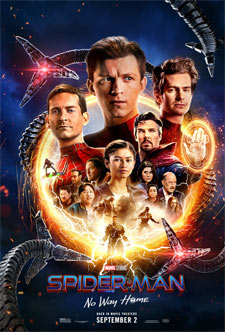 With Spider-Man's identity now revealed, Peter asks Doctor Strange for help. When a spell goes wrong, dangerous foes from other worlds start to appear, forcing Peter to discover what it truly means to be Spider-Man. (from IMDB)

For reasons unclear - aside from more money, of course - Sony has decided to release an extended version of 2021's smash hit Spider-Man: No Way Home to theaters. The 11-minute-longer cut is affectionately dubbed Spider-Man: No Way Home - The More Fun Stuff Version, adding in some extra dialog here and there and a few additional scenes. The original cut of the movie is already out on disc and available to stream, so it begs the question: are the added minutes worth the price of a ticket?

The short answer to that question is... probably not. But if you missed the movie on the big screen the first time, or are a rabid fan, it might be worth the investment (but the cheapest solution would be to take advantage of a discount ticket night or if you're part of a theater ticket subscription already). Even though a legacy sequel for my all-time favorite film (1984's Ghostbusters) released last year, Spider-Man: No Way Home was my favorite film to release in 2021. It's a solid, emotional action/adventure story with great acting and a wonderful cast. It also shows a more mature Peter Parker from Tom Holland, and - spoiler alert (if it's even still considered a spoiler a year later) - the addition of the previous two live action Spider-Man's is an absolute joy. This film manages to wrap up three separate Spider-Man series in one 2-and-a-half hour movie, and it's ridiculously satisfying. 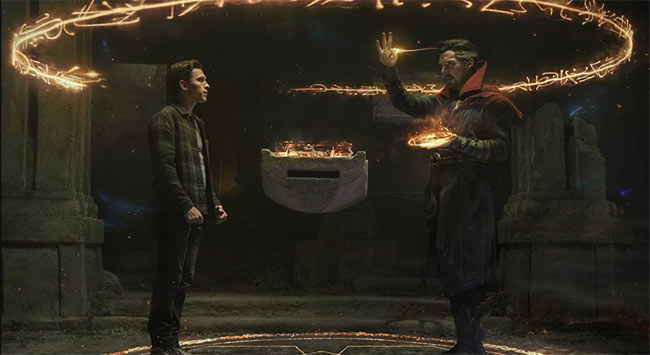 So... what do we get with Spider-Man: No Way Home - The More Fun Stuff Version? This paragraph here will spoil some of those additions in giving you an idea of what you can expect. If you don't want to be spoiled, skip to the next paragraph. The first recognizably "new" footage comes where Peter and his friends are being interrogated by "Damage Control." Some of it is a little longer, while we get new interrogation scenes with Peter. We then see new footage of Peter as Spidey catching a criminal (who is played by Tom Holland's real-life brother, Harry), and he finds himself in a verbal crossfire between adults arguing whether or not he should be fighting crime as Spider-Man (This is also when he's splashed with green paint). When Peter returns to school, his gym class taunts him to climb the gym wall to demonstrate his abilities. It further shows the struggles Peter is experiencing with the world knowing who he is. We're then shown a painfully long school news segment where Betty interviews several teachers and Peter's friends before interviewing him at the end. It's totally unnecessary and doesn't really add anything to the story. There's a new montage when Peter's friends hunker down in the Undercroft to try to find other villains who have leaked into their universe, and it's set to the famous song, "Monster Mash." It's a pretty fun segment, which also shows Ned accidentally making a mess of the lab while trying to set up. (They also find a miniature Sanctorum building which appears to also have a miniature Doctor Strange inside?) We get a little more of Jameson's news segment where he interviews a witness who saw Spidey fighting Electro and Sandman, and then a little snippet of Peter, Aunt May and the villains riding the elevator to Happy's apartment. When Happy's door camera goes off, we now see that he's in a legal meeting with Daredevil, which is definitely a moment they should have left in. Once the other two Peter Parkers arrive, we get just a little more dialog between them as they talk about second chances. Garfield's Peter tells Tobey's Peter that he'd love to hang out after the battle sometime and says he'll have to get his number, and the conversation where they talk about how Tobey's webbing comes out is longer. When they are comparing supervillains, Tobey expresses how it can seem amazing at first, but gets mundane after a while. Finally, there's a brand new post-credits scene (Really, it's ALL the way at the end after the credits finish) that shows us, through the school news program, how the events of the past three Tom Holland Spider-Man movies look with Peter Parker no longer existing. 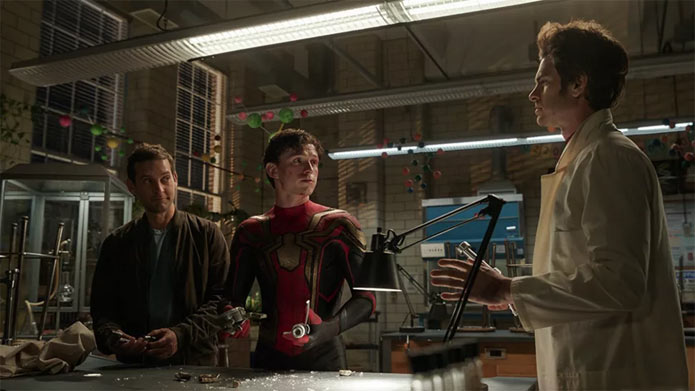 So is Spider-Man: No Way Home - The More Fun Stuff Version a better cut? Mostly, yes. I loved some of the additions - like a little more of the Peter's interacting, and some moments that show how tough life is for Peter now that the world knows his identity - but none of it really makes an already great movie all that much "better." There's one new scene that is pretty frivolous and goes on way, way too long (a series of interviews on the school news program), but other than that, the rest of the new stuff is quite good. If I had to choose which cut to watch from now on, this would be the one. When 2004's Spider-Man 2 released a Spider-Man 2.1 cut in 2007 that was only 9-minutes longer, they actually swapped out some scenes for different takes altogether. Spider-Man: No Way Home - The More Fun Stuff Version doesn't do that. It only adds without subtracting anything from it.

As far as content goes, it's mostly the same except for 1 additional use of "b*stard." Otherwise, there isn't really new violence or vulgarity added in. With that said, here's my previous content-focused paragraph from last year's review: The content is about the same as the other Holland-fronted Spider-Man movies. There's the third consecutive use of an unfinished "What the f---", but it seems a little softer this time than what's heard at the end of Far From Home (it's a recap of that scene shown at the start of Spider-Man: No Way Home - The More Fun Stuff Version). There are about 5 uses of the "S" word (2 of them being Strange's "Scooby-Doo this cr*p" line from the trailer, but the "S" word instead of "cr*p"), and 1 muttered use of "g*dd*mn" from a villain, with a handful of other uses of "Oh my G-d" and its variations as exclamations, and several uses of the "a" word. There aren't any graphically bloody visuals, although Peter's face gets pretty beat up and bloody during the last half or so of the movie. We also watch a character die in a lengthy and emotional sequence (and we see them lying dead with their eyes open a couple times), but the only blood shown is on another character's hand. Otherwise, there is a great deal of superhero violence, but it is seldom bloody or graphic. 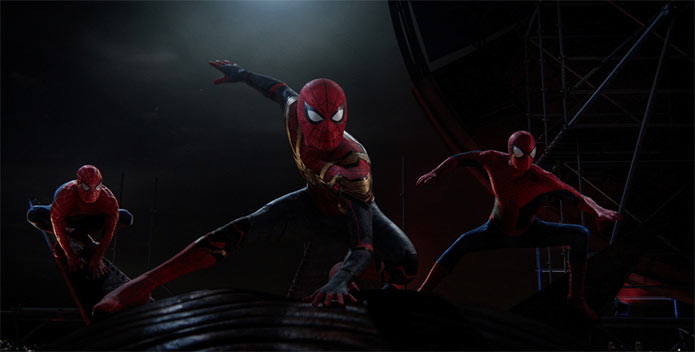 It's fun to see Spider-Man: No Way Home on the big screen again, and the additional content is a nice little bonus. However, is it worth the price of a ticket these days? Possibly not. Still, the Spider-Man: No Way Home - The More Fun Stuff Version is worth watching at some point, so if you enjoyed the 2021 cut, you'll want to get your hands on it when it inevitably releases on video. If you DO see it at any point in time, make sure you watch till the very end of the credits for a brand new post-credits scene!

Sex/Nudity: As Peter (dressed as Spider-Man) and MJ race back to his home, Happy and May hear them make a sound in his room and then hear their voices in a panic saying something like "What are we going to do?!" or something and Peter asking MJ to help him out of his costume, which sounds like they're possibly getting "romantic" behind the door. The adults then open the door to find Peter getting out of his suit and standing there in just his boxers with MJ helping him. They quickly try to explain they weren't "doing" anything, and in all the commotion of the various characters talking over each other, Aunt May makes a comment about needing to talk to him about sex.

Alcohol/Drugs: A man is drunk, drinking at a bar in the mid-credits scene.

Blood/Gore: Two characters have blood on their hands and faces after an explosion. A person then touches another wounded person and finds blood on their hand, meaning the wounded person is seriously injured; Peter has lots of bloody wounds on his face for most of the last act of the film; Doctor Strange has a bloody cut on the side of his face in one scene, and later we see it as a dried pair of scratches on his face; MJ has a small bloody cut above her eyebrow

Violence: Peter and MJ swing through the streets of New York to evade helicopters, police, and onlookers (much to MJ's horror); Doc Ock attacks a bridge full of people and starts throwing cars and debris around, while attacking Spider-Man. Spidey then struggles to save a falling car and its passengers in a couple situations, while also trying to defend himself from Doc Ock's tentacles; A bomb from the Goblin goes off on the bridge; Doctor Strange and Spidey fight through the streets of NY as they try to get an item from each other; A fight in a forest involves two villains and Spider-Man; A man attacks a couple people and then causes cars to explode outside a building. He then throws a bomb into the building, causing another explosion, and hits a person with an object that mortally wounds them. We then see a person die in an emotional sequence; A big fight sequence breaks out at the Statue of Liberty that involves multiple villains; A character punches a man in the face repeatedly and then nearly stabs them to death before being stopped by another person; A character is impaled with a blade (but appears to survive), and other superhero action. Disclaimer: All reviews are based solely on the opinions of the reviewer. Most reviews are rated on how the reviewer enjoyed the film overall, not exclusively on content. However, if the content really affects the reviewer's opinion and experience of the film, it will definitely affect the reviewer's overall rating.