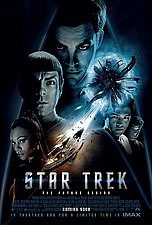 The greatest adventure of all time begins with "Star Trek," the incredible story of a young crew's maiden voyage onboard the most advanced starship ever created: the U.S.S. Enterprise. On a journey filled with action, comedy and cosmic peril, the new recruits must find a way to stop an evil being whose mission of vengeance threatens all of mankind. The fate of the galaxy rests in the hands of bitter rivals. One, James T. Kirk (Chris Pine), is a delinquent, thrill-seeking Iowa farm boy. The other, Spock (Zachary Quinto), was raised in a logic-based society that rejects all emotion. As fiery instinct clashes with calm reason, their unlikely but powerful partnership is the only thing capable of leading their crew through unimaginable danger, boldly going where no one has gone before... (from MovieWeb.com)

Ah, the "reboot." It's becoming more common in Hollywood film making these days. They did it with Batman, they did it with James Bond, they tried it with Superman, they're about to do it again this month with Terminator Salvation, and they've even commissioned writers to attempt a relaunch of Ghostbusters. Do we really need all of these series to be started over from scratch? After the success of both the Batman and James Bond franchises being given new directions, I suppose it's not necessarily a bad idea. And Star Trek is the latest franchise to be scrapped and started over anew.

The original Star Trek series, which debuted in the mid-60's and only lasted three seasons, bowed out of feature films in the seventh Star Trek film, Generations, in 1994. In it, fans witnessed the onscreen death of their beloved Captain James T. Kirk, and the passing of the torch from the original Star Trek crew on to the crew of Star Trek: The Next Generation. The TNG team took over until the tenth film, Nemesis, in 2002. It's been seven years since Trekkies had a new feature film, and popular TV producer and director turned film director (Mission:Impossible III), J.J. Abrams, has taken over the reigns to start the original franchise over.

Abrams' Star Trek takes viewers all the way back to James Tiberius Kirk's birth. In the film's introduction, we see Kirk as a baby, as a preteen (or young teen), and then mid-twenties, which he remains in for the rest of the film. This film shows how each crew member meets for the very first time. It's fun to see where each character comes from, how they get to know each other, and even to see how some don't even get along when they first meet. Abrams and crew cast a pretty decent contemporary take on the original Trek characters. Chris Pine and Zachary Pinto prove to be inspired casts as Kirk and Spock, respectively. Both capture enough of the original characters to make them seem familiar -- yet, like Daniel Craig's Bond, we know they have yet to grow into the characters fans have come to know and love. Lord Of The Rings' Karl Urban does a pretty good job trying to capture a young Leonard "Bones" McCoy, while Simon Pegg is a fun choice for Scotty. But there are plenty of changes to the characters that Trekkies are likely to not be too keen on. For example, the sexual side of young Uhura (Zoe Saldana) is played up a bit too much, and she's given a romance with another crew member that ought to raise an eyebrow or two. Also, Sulu, who was poorly miscast with John Cho from the Harold & Kumar films, seems virtually nothing at all like the original series character. But in the end, Abrams uses a plot element involving time travel to excuse any and all changes in character made in his new envisioning of the beloved series. 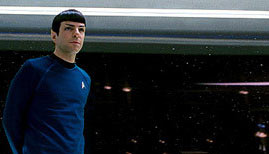 I admit, I have very little emotional attachment to the original Star Trek series. I did go through a time in my younger years where I watched the show, but I eventually got more heavily interested in The Next Generation series before no longer following any Star Trek projects quite as faithfully. Abrams' decision to rework the original characters is a bold and risky effort, but one that proves to be a pretty exciting one. Abrams' Star Trek is indeed more contemporized than any previous Trek film or TV show. In its 2-hour running time, this Star Trek is a highly stylized sci-fi action film that manages to still develop its ensemble cast of characters without getting lost in the science tech talk that most of the shows and its spin-offs revolved around. Surprisingly, Nemesis seemed to cater more to the action side of things as it appeared director Stuart Baird had tried contemporizing the series more then. But Abrams' takes it many steps further. Star Trek feels much bigger being laced with more humor than usual and more action and stunning special effects than possibly ever seen before in the series. In some ways, this felt more like Star Wars than Star Trek (in a good way).

The content in J.J. Abrams' Star Trek warranted the PG-13 rating pretty well. There is a little bit of innuendo in the movie, but the sexual content peaks in a sequence where Kirk is seen making out with a woman -- who happens to have skin that's all green -- with both being just in their underwear. Her roommate walks in and Kirk hides, but is able to watch the roommate disrobe down to her underwear as well. The whole thing is played for laughs, but feels largely inappropriate and unnecessary. Also, there is more language in this film than in most Trek films. Kirk says the "s" word at one point, while most of the other language consists of "d*mn," "h*ll," "*ss," and a few uses of blasphemy (one "g*dd*mn," and stuff like "my G-d" and "Oh my G-d"). It could have been a lot worse, but it not only felt weird for there to be so much language in a Trek film, but it felt wholly unneeded. Lastly, there's a lot of sci-fi and action violence - most of it isn't graphic, but we do see Kirk get into a bar fight early in the movie which ends with his face half-covered in blood. Other violence includes a man being stabbed with a staff (but we don't see the impact), an alien impaled by a sword, and a significant phaser battle, among other battle-related violence. Some may also find an interrogation sequence unsettling when aliens threaten a human by shoving an ugly looking bug into his mouth. Although we don't see the act of it going into his mouth, we do see it dangling over the person's face and then see their legs writhing from a distance as this happens. It's probably the creepiest moment in the movie.

Overall, Star Trek joins Batman Begins and Casino Royale as solid "reboots" to popular franchises. This is a new Star Trek for a new era, and J.J. Abrams has done a bang-up job breathing new life into the series. Whether or not Trekkies will accept these new identities of beloved characters remains to be seen, but you're likely to see a whole new generation of Trekkies born out of watching the latest Trek film. Hopefully some of sexual content and language will be toned down in future installments (which would also make them more family friendly), but in the meantime, I'd have to say I'm armed and ready for the next chapter in this new saga. Scotty, beam me up!

Sex/Nudity: When Kirk meets Uhura in a bar, he tries to pick her up, but she resists him. She then comments to him that she's surprised he's pursuing her because he must have sex with only farm animals, to which he jokes "not only farm animals;" We see Kirk in his underwear on top of a curvy woman with all green skin in revealing underwear. Her roommate comes in and he hides under the bed. The roommate then disrobes down to her underwear and we see more views of the green girl in just her panties and bra. The scene ends there; A girl passionately kisses a man and his face and asks what she can do for him (which seems to insinuate that she'd help him sexually, but he does nothing about it); Scotty makes a sexual reference (as a joke) about the Enterprise's thrusters (or something like that)

Alcohol/Drugs: We see some characters in a bar drinking. Kirk appears drunk while talking to Pike

Blood/Gore: A young Spock has a tiny bit of green blood on his lip; Kirk has lots of blood on his face during and especially after a bar fight. We also see some blood on the fist of a man punching Kirk. We later see dried blood streamed down Kirk's nose and some bloody tissues that were up there; Pike has a little bit of blood on the side of his face; Sulu has some scrapes on his face; Kirk has scrapes on his face all throughout the movie; We see a sword sticking through a Romulan body with some green blood on it

Violence: (Some spoilers may be included here!!) LOTS of action/sci-fi violence. The film opens as a large ship attacks a Federation ship. A captain is brought on board and we see him lunged at with a scepter. As it connects with his body, the scene cuts away; We see a person float off into space when an explosion occurs in the side of the ship; A ship that will explode is evacuated and we then see it collide and explode; Some kids tease a young Spock who then fights back; A child steals a car and runs it off a cliff; Kirk gets into a bar fight and is beaten pretty badly; We see a ship arrive in an area where we just see floating ship remains and debris; Three crewman freefall to a planet and as each land, one of them gets caught in a firestream and incinerates; There is a fist fight between several men. We see a Romulan get engulfed in flames. Another is impaled by a sword; As part of an interrogation, we see a villain hold a bug of sorts over a victim's mouth (that will supposedly attach itself to his brain). The camera angle then pulls back from the closeup and we only see his legs wiggly and hear him scream as they put it in his mouth; An entire planet implodes and we see some people on the planet fleeing, while some debris lands on and crushes a couple of them. We later see another shot of the planet imploding as someone watches; A man is antagonized who then beats on another man; We see a phaser fight on a ship's cargo bay. It's not specified if all hit with the phasers were killed or merely stunned; A man is beat up a bit by Nero and choked before being interrupted. Then another alien grabs that man by the throat again but is shot and drops him to the ground; A man is chased by monsters. One monster is attacked by another. The bigger one continues to chase the person until he reaches safety; A small ship is pursued by a larger ship, but the larger ship is attacked by another ship and we see it explode and fall apart into a worm hole Disclaimer: All reviews are based solely on the opinions of the reviewer. Most reviews are rated on how the reviewer enjoyed the film overall, not exclusively on content. However, if the content really affects the reviewer's opinion and experience of the film, it will definitely affect the reviewer's overall rating.