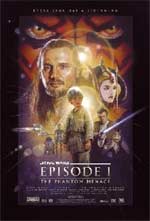 The saga begins! Two Jedi Knights, Young Obi-Wan Kenobi (Ewan McGregor), and his elder master Qui-Gon Jinn (Liam Neeson) must help save a Queen who is caught in between a trade dispute. In the process, they meet up with young Anakin Skywalker, who joins them on their quest (Anakin later becomes Darth Vader who we know from episodes 4-6)

We were lucky to get to see The Phantom Menace opening day by catching an evening showing at a theater that had just opened for business that same day. It's exciting to see a new Star Wars film after 16 years!

For those of you who grew up with Star Wars and are looking for a fourth installment, you're in for a treat. Star Wars is back! If you're looking for a serious, 11-oscar-nominated theatrical extravaganza, stay home. Star Wars is Star Wars. It's campy/corny at times, serious and adventurous at other times... and will never earn any Academy Awards for best acting.

Star Wars fans will love to see the origin of C-3PO and R2D2, as well as seeing Jabba the Hut and Yoda again. For those who are older now (and may have had the old Star Wars toys as kids even), you will enjoy seeing Qui-Gon and Obi-Wan whipping out the lightsabers and thrashing the bad guys, as well as the highly entertaining finale of the film. And it's really interesting to see Anakin Skywalker as a little boy, who fans will know becomes Darth Vader and has Luke as a son. So, the fight of Good vs. Evil continues once again.

OK, I'll nitpick a little now. One thing I have to complain a little about, besides Jar Jar's occasional annoying antics, are the aliens in the beginning of the film who are involved in the trade dispute. With all the computer effects in the whole movie, these aliens are as puppet-like as they come. Plus, they were super corny. Another [minor] complaint would be most of the other "monsters/creatures" in the movie were downplayed as being corny and goofy, instead of more serious like in Episodes 5 and 6. It does still feel like Star Wars and is still very good, but it does detract some. Also, I would have liked to have seen more Qui-Gon, Obi-Wan and Darth Maul. The "Force"-type stuff that we know Star Wars for the most was kind of thrown on the backburner in this one. Instead of Luke battling Darth Vader and the Emperor for exciting prolonged scenes, the main excitement-filled battles were shortened and reduced to "teasers" here. The final battle is still awesome, but it felt a little underdone.

Overall, Star Wars: The Phantom Menace does not live up to the quality of the originals, but it carries some of the nostalgia that made the originals endure so well, making it tough not to get swept away with it. I'm definitely looking forward to the next installments of the Star Wars prequels!

Blood/Gore: Anakin has a few minor cuts on his arm. A light saber is driven through a person's chest, killing them, but it's not bloody. Another person is cut in half by a light saber, but due to the clothing and camera angles, we don't see anything gory or bloody. We briefly see several shots of a body on fire at a funeral.

Violence: Lots! - Light saber fights, people stabbed and cut with no blood, ships and robots blowing up, big fish monsters eating other monsters, etc... Disclaimer: All reviews are based solely on the opinions of the reviewer. Most reviews are rated on how the reviewer enjoyed the film overall, not exclusively on content. However, if the content really affects the reviewer's opinion and experience of the film, it will definitely affect the reviewer's overall rating.