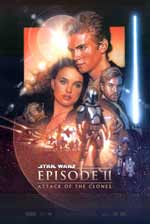 Ten years after the events in Episode One, a separatist movement encompassing hundreds of planets and powerful corporate alliances poses new threats to the galaxy that even the Jedi cannot contend with. These moves, long planned by an as yet unrevealed and powerful force, lead to the beginning of the Clone Wars - and the beginning of the end of the Republic. To counter this looming menace, Supreme Chancellor Palpatine, continuing his consolidation of power, authorizes the creation of a great army of the Republic to assist the overwhelmed Jedi. Against this troubling setting, our familiar heroes Obi-Wan Kenobi, Padme Amidala and Anakin Skywalker are thrown together for the first time since the conflict between the Trade Federation and Padme's home planet, Naboo. Anakin is given the job to protect Padme and through this their love for each other blossoms, a forbidden love the two of them cannot ignore. As things get more complicate for our heroes, and the the Clone Wars begin, you can bet there will be some light sabers ablaze.

I think "wow" sums up the movie nicely. I wasn't sure what to expect with the mellow Episode One, the hype surrounding Episode Two, and the negative reviews that half-brained critics were issuing. It's true what was originally said, Star Wars Episode II: Attack of the Clones does indeed set the film back on track. It's here folks, and you might not be ready for it.

A lot of people were worried about the "love story" that is crucial to the Star Wars saga. Some people figured it'd be too sappy, it'd be geared more towards a teen crowd, etc, etc. Let's face it folks, where do you think Luke and Leia come about? You have to have this story in here. Lucas does a good job intermingling this plot element into the overall story. This and some other key plot points help begin bridging the gap between Episode One and IV, V, and VI (the original trilogy). In fact, for fans or even those who appreciate the other films, it's a complete joy to watch things unfold and certain puzzle pieces fall into place. There's something infectiously interesting while morbid about seeing how Anakin slowly grows into the man who we all know to become Darth Vader in the later films. One can only wish Episode Three wasn't three years away!

OK, plot-wise, it may seem a little hard to follow for some, but it's the perfect setup for some excellent sequences and action scenes that make this film a thrill to behold. Hayden Christensen did a surprisingly decent job as the arrogant and sensitive Anakin. The thing about Star Wars films is you don't watch them for an amazing plot, magnificent acting, or clever dialogue. So if you read otherwise, then the reviewer has spent a little too much time watching reruns of late night TV. Natalie Portman is a little less ridged, which helped. Surprisingly enough, her character wore more "casual" and revealing clothing in contrast to her Episode One personality. It was nice to see her less wooden, but she still wasn't as down to earth as say Leia was in the original films. McGregor did splendidly as Obi-Wan again. His character was probably the strongers of the group and his acting was perfect. However, the spotlight was often stolen by... Yoda. The little green creature was fully computer-animated for the first time in a SW film, as opposed to being a puppet. This gave him a lot of more life and his role played in the film was a lot bigger than usual.

The action sequences, especially towards the film's close, were often jaw-dropping and planted me and my colleagues on the edge of our seats for the remainder of the film. The action is packed in tightly. You might feel like you've had a work out by the time the credits roll. I must warn you, violence is in abundance, however. While very little of it is graphic, we see a lot of people killed during fights, including one or two decapitations (one being a helmeted character, so no blood or anything is shown). The other might have occured when a character begins killing a bunch of creatures, but it's dark and hard to make out what's specifically happening.

In closing, I just need to say that Attack of the Clones was one great time at the movies! Relatively clean besides some violence, the film is a nice adventure-filled break from ordinary life that many should enjoy. It's a worthy installment into the Star Wars films that needs not be missed. Hopefully you'll be as pleasantly surprised as I was. contact me.

Sex/Nudity: There isn't much beyond a couple passionate kisses. Also, Padme wears a few outfits that expose her back, shoulders, and stomach in various instances during the film.

Alcohol/Drugs: While in a pub, Obi-Wan is sitting at the bar for a drink and is offered something called "death sticks," but he declines.

Blood/Gore: A woman who has just been in an explosion has a tiny bit of blood on her face. We see a woman with bloody cuts on her face and bloody marks on her wrists after she's been bound. We see some bloody slashes on Padme's back after a monster has cut her with its claws. We see a man get decapitated but because he is wearing a helmet, there is no blood or gore besides that. We see a character with some burn marks on their clothes, but nothing especially bloody or gory. Finally, we see a character lose a limb during a battle.

Violence: A lot of action involving lasers, light sabers, explosions, etc. A ship blows up and tosses passengers from it, we see some of them have died. Several characters are attacked by large monsters in a coliseum. We see several scenes involving large-sized battles where a lot of characters are killed or injured, but there isn't really any graphic violence (besides what's mentioned under Blood/Gore). Disclaimer: All reviews are based solely on the opinions of the reviewer. Most reviews are rated on how the reviewer enjoyed the film overall, not exclusively on content. However, if the content really affects the reviewer's opinion and experience of the film, it will definitely affect the reviewer's overall rating.