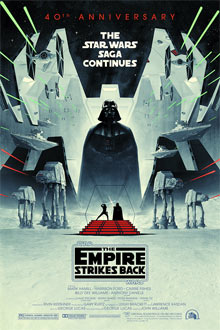 Some time has passed since the events that took place in Episode IV (A New Hope). Hiding from the Galactic Empire, the Rebels have set up a secret base on the ice planet of Hoth. When Darth Vader, who is obsessed with finding his newest enemy Luke Skywalker, discovers the base's location, the Rebels are on the run. While Luke heads to a remote swamp planet called Dagobah to meet with the last Jedi Master to receive training, Vader has sinister plans in store for his friends...

I first saw The Empire Strikes Back many, many years ago on a little primitive recording device called VHS (kids, ask your parents). I'd been born smack-dab in the middle of the original Star Wars trilogy and they soon became staples for entertainment on sick days home from school. Since the trilogy's inception, conflicting stories on their origin have surfaced, with one explaining that creator George Lucas had always invisioned six films (some sources say nine). Another story claimed that with the success of the original Star Wars, that Lucas had written a sequel with an elaborate backstory that would make the current films sequels to a yet-to-be realized first trilogy. Whatever its origin, The Empire Strikes Back was not released as Star Wars 2, but strangely as Episode V (with the subtitle Episode IV: A New Hope later added to Star Wars). 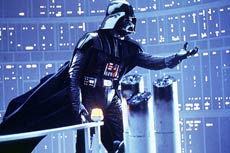 Star Wars Episode V: The Empire Strikes Back is easily one of the most riveting and unpredictable sequels an original story has had. In the original 1977 film, the good guys triumph over evil with a glorious finish to the story. The 1980 follow-up is hardly as victorious, in fact, it's quite the opposite. In the film, Darth Vader chases down our heroes and sets a trap to lead Luke Skywalker to him. The story is smart, action-packed, and surprising, as the climax reveals one of the greatest and most famous plot twists in film history. The film ends with a cliffhanger that wouldn't be resolved for three more years, in 1983, when Star Wars Episode VI: Return Of The Jedi would release. This sequel is overall much darker and more dramatic than the original story, with several sequences being a lot more intense in nature. The characters Lucas established in Star Wars are faithfully expanded upon in the sequel, and it's great to see what director Irvin Kershner did with them.

One thing Empire does that Star Wars didn't was further Luke along in the process of becoming a Jedi. After watching the original trilogy, it seemed a natural progression to see Luke get drafted by Obi-Wan in Star Wars, begin his training in Empire, and complete the transformation in the aptly titled Return Of The Jedi. Looking back, it seems odd that if there never were any sequels to the original 1977 film, Luke's maturation would never have been completed, and the closest we would have come to seeing him wield that saber would have been when he was practicing against a tiny droid. Over the years, many have paralleled traits of the "Force" to Christianity and the things Luke learns on Dagobah from Yoda are simple life lessons Christians can apply to their faith. In fact, some may be wondering why, when Luke fails through his disbelief, Yoda just doesn't come out and say, "Of little faith you are!" 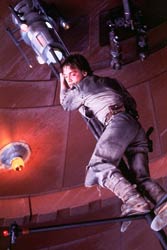 When The Empire Strikes Back was re-released among the original trilogy in theaters twenty years later in 1997, George Lucas re-edited the films, adding additional footage, deleted scenes, and computerized effects specially made for the re-releases. Reception of the changes were mixed and some of these changes were further edited in 2004 when these films made their DVD debuts. But these films have never looked as good as they do on DVD. The most noteworthy change Lucas made to the DVD version of The Empire Strikes Back is in the scene where Vader meets with the Emperor via transmission for the Emperor's only appearance in the film. The original 1980 version, as well as the 1997 re-release version, included the originally filmed appearance of the Emperor. However, for this DVD release, Lucas had actor Ian McDiarmid, who played the sinister Emperor in Return Of The Jedi and the prequels, film a new piece of footage for this sequence. Vader's lines were also slightly changed for continuity purposes when linking the original trilogy with the new prequels. The end result looks great and I'm actually really happy about this change. The only other change worth mentioning is that bounty hunter Boba Fett's lines were all overdubbed by Temuera Morrison, who played the clone troopers and Jango Fett in Episodes II and III. Being that Boba was proposed to be a clone of Jango in the prequels, it seemed somewhat logical to give him Jango's voice. It helps link the films together a little bit more, but Jason Wingreen's original voice is definitely missed.

Violence is the film's only red flag as it contains a few dismemberments as well as quite a bit of action violence. Nowadays, a film like this might receive a PG-13 rating but it is definitely borderline. Thankfully, the film keeps the language clean throughout and just barely winks at innuendo for the extent of any kind of sexual content.

September 25th, 2020 Theatrical Re-Release
While I may have been a newborn sleeping in my parents' car when the movie first hit drive-in's in 1980, I've never seen one of my top-5 all-time favorite movies on the big screen. A global pandemic wasn't about to keep me from this opportunity to see it, so I made sure to grab a matinee showing (masks and all) to see Star Wars: The Empire Strikes Back "40th Anniversary" on the big screen with my family. While I've seen the movie at home probably dozens of times since its release (taped on a VHS, on TV, then DVD, Blu-Ray and streaming in 4K), it truly felt like a totally different experience to see it blown up on a large screen in a theater with surround sound. From ships whizzing by to seeing little details that are more easily missed on a smaller viewing platform, I loved every second of Star Wars: The Empire Strikes Back in a movie theater. To be fair, some of the special effects are pretty dated and don't translate quite as well--like Vader's hologram transmission on the AT-AT, and some of the stop motion animation for things like the tauntauns and vehicles--but the acting and story still shine through (which definitely says something about the film's timelessness). And the movie's emotional beats--like Han's fate encased in carbonite--land especially hard in this format (even though we all know he ends up okay in the next film). The fight between Vader and Luke is also especially impactful in the theater setting. Needless to say, if you get a chance to see this movie again (or for the first time) in a theater, take it. I wouldn't mind seeing it again before its re-release ends. For those wondering what edit of the film this is, it's definitely the later DVD release of the film, which offers changes like adding Ian McDiarmid as The Emperor and extending the wampa cave scene at the beginning. - John DiBiase (reviewed: 9/28/20)

Sex/Nudity: When the Millenium Falcon shifts and Leia falls in Han's arms, she demands he let her go. He responds sarcastically "Don't get excited!" to which she replies "Captain, being held by you isn't quite enough to get me excited." Han then replies "Sorry sweetheart, I haven't got time for anything else."

Blood/Gore: Luke has some blood on his face from being struck by a large animal; We see a snow creature eating a bloody carcass; We see the dismembered limb of a snow creature fall to the ground and a brief shot of the animal without the limb (just a seared mark where the arm was cut off); Han cuts open the belly of an animal with a light saber, revealing it's non-bloody innards; We see a few cuts and scrapes on Luke's face as it's healing; A pilot has a little bit of blood on his face while flying; In a vision that proves, Luke faces Vader and decapitates him with his saber. We see the mask (with the head insider) lying on the ground. The faceplate then explodes to reveal Luke's lifeless face staring back at him; We see the back of Vader's head without his helmet on, with his skin bearing gross, deep red scarring; Luke has some red abrasions around his eye; A character's hand is cut off and we very briefly see the burned stump

Violence: A lot of space battles that result in ships exploding, presumably killing passengers inside; Vader uses the force to choke several of his officers to death; a person is frozen alive in carbonite; A person is tortured with some kind of electric shocks but remains alive; A snow creature attacks a person and that person cuts off its arm; Han punches a person and is struck down by their guards; Chewie chokes a man but lets him go; In a vision, Luke decapitates Vader (see above "Blood/Gore"); A droid is shot into pieces but put together again; etc Disclaimer: All reviews are based solely on the opinions of the reviewer. Most reviews are rated on how the reviewer enjoyed the film overall, not exclusively on content. However, if the content really affects the reviewer's opinion and experience of the film, it will definitely affect the reviewer's overall rating.