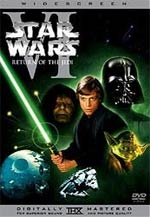 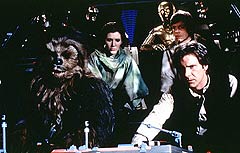 Leia and Luke return to Tattoine to attempt to rescue their captured friend Han Solo. Meanwhile, the Galactic Empire has begun building a brand new Death Star weapon, greater than the first. With time running out to stop the Empire from destroying what's left of the Rebels and dominating the entire galaxy, it's up to Luke, Han, and Leia to travel to the forest planet of Endor to break down the Death Star's temporary shield system and take down the Empire once and for all.

In 1983, George Lucas brought closure to his trilogy extravaganza that was known as Star Wars. Return Of The Jedi picked up shortly after where The Empire Strikes Back had left off. The Rebels had failed, Luke discovered his enemy was closer to home than he'd ever dreamed, and one of our heroes was frozen in a hefty slab of carbonite and captured by a bounty hunter. The ending of Empire left a bitter taste in many fans' mouths in the summer of 1980, and it was a long wait for a resolution when the exciting finale released in 1983. 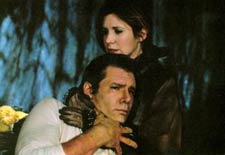 Return Of The Jedi completes Luke's transformation from a whiney farmboy to a Jedi Knight. Mark Hamill, who was never been exactly known for his acting abilities, does a fine job as a more mature, grown-up Luke. It really makes the growth in Luke's life much more evident. In this installment, we finally see a few other character transformations, especially in "scoundrel" Lando Calrissian who helps Luke rescue Han and joins the Rebellion as a General leading the squadron attack against the Empire's second Death Star. The Emperor gets ample screentime this time around, with his quest for turning Luke to the Dark Side becoming a major plot point. Upon seeing this film for the first time on DVD since seeing Episode III, it's intriguing to see how consistent the Emperor's character really is. While I've been a Star Wars fan for as long as I can remember, I wasn't knowledgeable enough to see the character continuity that Lucas poured into the prequels from the original films. Hearing Obi-Wan describe Anakin's fall, and witnessing the Emperor use some of the same old tricks on Luke that he used to woo Anakin to the Dark Side, was really exciting. Return Of The Jedi isn't a perfect film, but it's most definitely a strong finish to the six-film series, and an all-around wonderful action, sci-fi adventure.

The DVD version of Jedi brings a few changes to the film. First of all, the picture is beautiful -- the best of any of the original films. Lucas also did a great job with cleaning up some of the overlays, specifically when Luke is battling the Rancor. The two images mesh a lot better than previously and it hasn't looked more convincing. The most significant change to the film, however, is the addition of Hayden Christensen as Anakin in the final scene of the film. Instead of Sebastian Shaw shown as the ghost of the older Anakin after he's turned good, Lucas has substituted the younger Anakin, played by Christensen. Anakin appears with a ghost of the older Yoda and Obi-Wan as well, but it's not exactly explained why only Anakin is young and not the others. Perhaps because Christensen is the Anakin we all know of after the prequels? Or is it just that a Jedi who turns to the Dark Side and turns back before death assumes the form of who they were before they turned when they die? Unfortunately, this answer is never given. 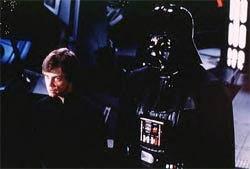 The content in Jedi is among the lighter of the three originals. However, we're still treated to many glimpses of Princess Leia in nothing but a skimpy metal bikini when she's held as a prisoner in Jabba's palace. Also, there's a lot of action violence that includes Luke slashing up some punks on Jabba's barge, the battle on Endor, and the climactic duel between Vader and Luke. Finally, when Vader is finally unmasked by the film's end, what we see isn't a pretty sight. Of course, it looks like he's healed up pretty decently since being burnt to a crisp at the close of Revenge Of The Sith, but he still doesn't look too good.

Overall, Return Of The Jedi ties up all loose ends and closes out a wonderful series of action/adventure sci-fi films. Although it's PG, there's still enough violence to warrant exercising caution before showing it to the kiddies.

Sex/Nudity: We see some dancers with small outfits in Jabba's Palace; We see many shots of Leia in a small and somewhat revealing metal bikini

Blood/Gore: We see the Rancor monster pick up and bite down on a Gamorrean Guard. We then see just its hand sticking from the Rancor's mouth as it finishes swallowing him; Luke's mechanical hand is struck by a blaster and we see a brief close-up of it as he pulls a glove over the damaged mechanical parts; Chewie is attracted to a slightly gory animal carcass that ends up trapping the team in a large net; Luke cuts off Vader's hand with a light saber, revealing a mechanical stump; We see a man's discolored face with scarring all over it when his helmet is removed.

Violence: A woman falls into a pit and is eaten by a monster (not seen); We see a Gamorrean Guard being eaten by a large monster; During a battle on Jabba's barge, many characters are either shot, struck by a light saber, or thrown into a pit to be eaten by another large monster; Battles occur in space and on a planet that result in many dead Rebels, Imperial forces, and Ewoks; A light saber fight ends with two characters dying; etc Disclaimer: All reviews are based solely on the opinions of the reviewer. Most reviews are rated on how the reviewer enjoyed the film overall, not exclusively on content. However, if the content really affects the reviewer's opinion and experience of the film, it will definitely affect the reviewer's overall rating.