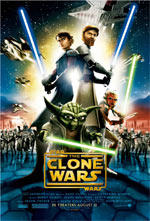 On the front lines of an intergalactic struggle between good and evil, fans young and old will join such favorite characters as Anakin Skywalker, Obi-Wan Kenobi and Padmé Amidala, along with brand-new heroes like Anakin's padawan learner, Ahsoka. Sinister villains - led by Palpatine and Count Dooku - are poised to rule the galaxy. Stakes are high, and the fate of the Star Wars universe rests in the hands of the daring Jedi Knights. Their exploits lead to the action-packed battles and astonishing new revelations that fill Star Wars: The Clone Wars. (from MovieWeb.com)

Shortly after the release of the successful "final" live action Star Wars film, Revenge Of The Sith, in 2005, creator George Lucas began talking about succeeding projects. One of them, in addition to an eventual live action TV series, was announced to be a second animated TV series. One anime-styled series preceded Revenge Of The Sith filling in backstory for "The Clone Wars," with the series leading right up to the opening sequence of the final movie. For some reason, Lucas felt a wealth of potential stories could be had by exploring The Clone Wars further, so a computer animated series is expected to hit TV this Fall. But to introduce fans to this new series, Lucas decided that an introductory, standalone animated feature film was suitable for release in theaters first, and with that, we have Star Wars: The Clone Wars.

Star Wars: The Clone Wars floats somewhere between the events between the feature films of Episode II and III. It's standalone enough that you could watch it between those two films with no problem, however, the feel of the film is vastly different from the live action films despite some of the charm and characteristics of the live action films do find their way into The Clone Wars (seeing Jabba, The Jawas, R2, and even C3PO helps with that). However, The Clone Wars does tend to feel much more like a cartoon for television than a theatrical presentation. It has all the action necessary for a feature film, but with there already having been an animated series for the events during The Clone Wars, there's a distinct sense that we are watching a television series pilot on the big screen... with the knowledge that that is exactly what it is not really helping its case much. The fact is, Star Wars: The Clone Wars is the new TV series' first three episodes strung together as one story. And, in some ways, it does feel like it.

The other thing is, the film tends to look and feel like a video game at times. Part of me wanted to grab a video game controller as if some of the many battle scenes were lifted right from the Star Wars: Battlefront video games. What encouraged this feeling even more so was the fact that Obi-Wan Kenobi's voice was provided by the same actor who provided his voice for the Battlefront video games, among others. Same goes for the character of Yoda as well. One nice treat, however, was actor Christopher Lee returns to provide the voice for his live action character Count Dooku and Samuel L. Jackson even returns as Mace Windu for the brief time he appears in the film. Stepping in for the first time in Anakin's boots is television actor Matt Lanter. Lanter does a pretty good job capturing the role of Anakin, improving upon Hayden Christensen's stint in the last two prequels. In Clone Wars, Anakin is very much a central part in the story, and it's rather sad to realize we're still rooting for who will ultimately become Darth Vader (and now we've actually seen how he does, as well as some of his dark deeds in the process). Obi-Wan has never swayed from being a Jedi hero to root for, so it would have been a little better had the story centered around him a bit more. Here, Anakin's given his own Padawan apprentice (really? I never got that kind of sense of trust from Yoda in the films), so it's weird to see him in such a role as trying to guide the ways of a future Jedi Knight.

I was pleasantly surprised by the visuals in The Clone Wars. While some of the talking was a little too stiff (as well as some of the walking), the textures were rather impressive as well as the camera angles and beautifully painted backdrops used. There was a bit of imbalance, however, between the portrayal of new characters versus the established ones. Seeing Anakin, Obi-Wan, Dooku, etc, animated to match their live action likenesses (to a degree) helped them seem more realistic and believable. However, introducing new characters like Ahsoka Tano and, especially, Ziro The Hutt, gives a distinct cartoony and synthetic feel. Seeing Anakin interact with the doe-eyed Ahsoka reminds us heavily that we are watching an animated Star Wars film. But The Clone Wars definitely bears the Lucas branding. From the embarrassingly flamboyant and effeminate Ziro The Hutt (?!) to an infant Hutt that coos and giggles and even points out a solution to a problem that his possessors couldn't spot, it's typical eye-rolling-worthy Lucas goofiness. Nothing's as bad as Jar Jar Binks, but Lucas still hasn't learned his lesson. We even have dumb name-calling between Ahsoka and Anakin as he calls her Snips (for being "snippy") and she calls him "Skyguy." It's obvious The Clone Wars is for kids... and yet there's still one use of "d*mn" from a clone trooper for... what reason exactly?

Since we're listing strikes against The Clone Wars, we can't leave out the film's unbelievably disappointing score. If you want your feature film to feel like a television show, this is the way to do it, folks. Instead of John Williams' beloved score (or at least someone paying homage to it), we're treated to Kevin Kiner, a man who's long list of work consists of mostly a couple episodes from forgettable shows or straight-to-video films like Tremors 3... How in the world did he score (pun sort of intended) a job like Star Wars?! Sad, sad truth. Kiner replaces the theme with some kind of strange update that's as dismissible as anything you would have heard in Randy Edelman's score for The Mummy: Tomb Of The Dragon Emperor should you have actually wasted money to see it. While an average to passable score is at least not noticeable while watching a movie, a bad soundtrack stands out as being as such, and Kiner successfully provided just that. To make matters worse (if not strange), we don't have the usual "opening crawl" that sets up the story, but instead we hear an announcer voice that brings us up to speed for the events of the film. It only takes a few moments to shake off the cheese and dig into the action, but it's a bizarre choice to open the movie for sure.

Overall, The Clone Wars is decent, but not especially extraordinary or memorable. You won't look back on 2008 as fondly bringing you your first animated Star Wars film. There's an element to the idea of revisiting "The Clone Wars" again that feels slightly like a retread when bridging the expansive 20-ish year gap between the events of Revenge Of The Sith and the original Star Wars film (from 1977) would have been far more interesting or appealing (if not entirely too dark, however, since it'd be the rise of Darth Vader's empire). Still, with The Clone Wars aimed at the kiddies more than the adults, it works for what its intentions are. There are heaps of violence, but none grotesque. Most of it consists of droids being sliced and diced by lightsabers or the occasional clone trooper losing a helmet (or head?) from a laser gun blast. It's certainly more kid-friendly than Revenge Of The Sith, but serious adults hoping for something more along those lines will be entirely disappointed by the presence of the young Ahsoka Tano (who's aimed directly for the kids) and the baby Hutt, which the main characters dub "Stinky." From teenager bickering (which isn't too far off from the Star Wars spirit considering Han and Leia were always at each other's throats... well, at first) to its animated packaging, this is a Star Wars for the next generation. It's decent enough to make the show worth checking into, but hardly enough to fall in line with the original three films from the late 70's and early 80's. Still, there's something altogether appealing about seeing anything related to Star Wars on the big screen again, and while Lucas is planning to bring back all six films to the big screen via 3-D, it's nice to see something new from the Star Wars universe.

Sex/Nudity: The young Ahsoka Tano appears to be wearing a tube top and mini-skirt as her Padawan Jedi outfit?

Blood/Gore: We see a stretcher with the heads of a few dead bounty hunters on it, but nothing is gory as they're all alien heads (and look more like masks than decapitated heads)

Violence: Lots of action violence. We see many explosions, lightsaber fights, clone troopers dying by fire fight from the droids, the Jedi slicing the droids to pieces and other cartoon action violence. Disclaimer: All reviews are based solely on the opinions of the reviewer. Most reviews are rated on how the reviewer enjoyed the film overall, not exclusively on content. However, if the content really affects the reviewer's opinion and experience of the film, it will definitely affect the reviewer's overall rating.