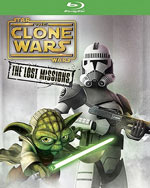 Against a backdrop of ever-shifting loyalties, uneasy alliances and ancient hostilities, the conflict between the Republic and the Separatists ramps up, setting the stage for Darth Sidious' ultimate act of treachery against the Jedi. In these uncertain times, some of the deepest mysteries of the light and dark sides of the Force are revealed as an intrepid clone trooper uncovers a shocking conspiracy, Anakin Skywalker's closest relationship is tested to its limits, and Master Yoda makes a discovery that could forever change the balance of power in the galaxy. Complete your collection and experience all the wonder, intrigue, action and suspense of THE LOST MISSIONS in 13 must-own episodes -- plus a Behind-The-Scenes Documentary -- as this thrilling chapter of the STAR WARS saga comes home on DVD for the first time! (from Amazon.com)

Star Wars: The Clone Wars was an ambitious project. It was conceived as an animated series to bridge the gap between Star Wars: Episode II - Attack of the Clones and Episode III - Revenge of the Sith. While it doesn't quite start right where Episode II left off, it does flesh out the characters, especially the bond between Anakin and Obi-Wan, and seeks to answer some fans' questions -- like how the Jedi can become one with the Force and return from the grave, how Yoda was paired up with his post-war Dagobah home, and if the individual clones had their own personalities. The show proved to be quite the success, evolving a lot over five-plus seasons before Disney purchased Lucasfilm and cancelled the show. However, one glance into the content of an episode or two of the Clone Wars animated series and one might realize it's not your usual Disney fare.

When the show was cancelled, 13 episodes were already in production -- not counting four more that remain unfinished but were included in the Blu-Ray release as a cool bonus feature. Assuming the reader has a fair knowledge of the show, it's important to note that, while this was ultimately season 6 in an incomplete form, it's meant to follow the events of season 5. Sadly, season 5 ended with the cliffhanger of Anakin's padawan, Ahsoka Tano, being framed for crimes she didn't commit and the Jedi Council not believing her. When she's eventually proven innocent, she decides to leave the Jedi Council and disappears into the sunset. That was the close of season 5. With The Lost Missions being season 6, the story doesn't really pick up where it left off. It's only in the unfinished "Utapau" story arc in the bonus features that the effect of Ahsoka's departure is expressed as a struggle for Anakin. It's unfortunate that this scene never made it into a finished episode, too, because it's a great character moment for Anakin and Obi-Wan's shared brotherhood.

What does make it into the 13 episodes here? The first story arc is a doozy. It addresses a plot twist from the film Episode III: Revenge of the Sith where the clones are ordered to kill the Jedi. It's otherwise known as "order 66," and in this four-part story, a clone goes haywire, muttering about carrying out orders and shoots a Jedi dead. The Jedi Council then investigate this crazy occurence and return to the planet Kamino, where the clones were forged, for answers. A clone named Fives tries to get to the bottom of things and escapes being "silenced" several times for what he's learned. The story doesn't have a happy ending, unfortunately, but it's certainly an intriguing one. The next two stories aren't quite as interesting, even more unfortunately. The first is a three-part story where Clovis, a character from season 2 (episode 4, "Senate Spy"), returns to try to use his past friendship with Padme to take power. There's a lot of political chit chat in these episodes that bogs them down a bit. A highlight of the story, however, comes in "The Rise of Clovis" where Anakin lets his jealousy over Clovis putting moves on Padme escalate to him beating down on Clovis. Not only is the guy asking for it, but it helps show a little of that on-the-edge "dark side," so to speak, that inevitably causes Anakin to lose out in Revenge.

Both parts of "The Disappeared" are rather curious. Jar Jar Binks unnecessarily gets two episodes here, with Mace Windu surprisingly tagging along on a diplomatic mission as support to make sure everything goes smoothly. Of course it doesn't, but what's intriguing about this story is that they actually -- wait for it -- give Jar Jar a love interest! Thankfully, he's not near as annoying here as he is in The Phantom Menace, but ultimately, I could have done without ever having to see "Representative Binks" ever again. "The Lost One" addresses a pretty neat plot where the lightsaber of Sifo-Dyas is found (the Jedi who's only ever been mentioned by name, and it was in the Attack of the Clones film as being the one who first ordered the clone army). Things continue to heat up as the Jedi realize the clone army could be compromised given its increasingly shady and dark origin. The final three episodes take us on a journey through the Force as Qui-Gon Jinn -- voiced once again by Liam Neeson himself! -- talks to Yoda from beyond the grave. All Star Wars fans know from the very first 1977 film that Obi-Wan could talk to Luke after his death. And in Empire Strikes Back, we find that he can actually appear in a glowing, ghostly form. In this story, Yoda's sanity is questioned (even by himself) when he hears what sounds like Qui-Gon, but then he follows the voice's instructions to go to Dagobah for answers. It's there that Qui-Gon continues to talk to Yoda and encourage him to investigate the mysteries of the Force. Yoda then goes to another planet that's heavy in the Dark Side and his own allegiance is tested. It gets kind of weird, but the series (that is, the television series) then ends on this solemn note that seems to set things up rather nicely for Revenge of the Sith, even if it doesn't exactly directly lead into the movie scene for scene (which apparently was possibly one of the show's ultimate goals).

As far as content, I'd have to admit that the show tends to be rather dark and violent. The Sith have a group called The Night Sisters and, man, they're super evil and dark. The show does define good and evil pretty clearly, with good always being the one emphasized, but some of the stories involving magic and the Sith (and especially the Night Sisters) are just so incredibly dark. Furthermore, it's amazing how violent the show can be. It's pretty much on par with Revenge of the Sith, just minus the charred, burning body of... err... a main character. In the first episode of this season, "The Unknown," a clone named Tup shoots a Jedi in the head just off screen, killing her. Then there's plenty of medical talk within the same story arc, including an implied procedure that burrows into a clone's head, and characters regularly die on the show. Granted, it is called Clone WARS, so you really can expect this to be heavy on the "war" aspect of this sci-fi fantasy. Some other moments of note: In "Orders," we see some drunk officers with wine bottles in hand that they toss at a cab car; In "Crisis at the Heart," Count Dooku uses the Force to make Padme's blaster shoot and kill a guy. And later, a character chooses to drop to their death from a great height; In "The Disappeared," we hear about and see a technology that can suck the "Force" or "essence" out of a person (and there are some deaths). We also see the super evil "Great Mother" from The Night Sisters work some magic; And in the Yoda story arc, there's a lot of magic and mystical stuff involving the Force, including a super weird sequence where Yoda is confronted by a very evil, black Gollum-like version of himself with red eyes that he must fight. He also sees visions of a lot of the Jedi being killed during the pending events of Revenge of the Sith. All in all, the content borders on PG-13 at times, so definitely be cautious!

The Clone Wars show was pretty hit and miss through its entire run (but what show isn't, right?), but when it hit, it really hit. This season certainly has its great moments, even if it's just watching things get set up more nicely for Revenge of the Sith. The showrunners did a great job showing growth between the characters -- even though Anakin seems more mature and experienced in the cartoon show than any of the live action movies. The unfinished Utapau episode series is a great additional bridge between the show and Revenge, so it's especially unfortunate it was never finished. The dialog between Anakin and Obi-Wan is excellent, and the way the series ends feels even more like it leads up naturally into the beginning of Episode III. The only things that are truly missing are resolutions for Ahsoka Tano, Darth Maul (Yep! He came back in season 4), and other Clone Wars characters like Cad Bane and Ventress. If you're a diehard fan of the show, though, you won't want to miss this set.


Star Wars: The Clone Wars - The Lost Missions is the first release of the show on disc that is Disney instead of Fox, so the disc set does include Disney Movie Rewards points. The clarity of the HD transfer is great, too, so Blu-Ray is still the way to go.

Star Wars: The Clone Wars - Declassified (16:02) opens with a 2005 interview snippet where Lucas announced the series. The crew then talks about the birth of the show, how it evolved from a technical standpoint, and the crew's reaction to the show ending (and the crew disbanding). Unfortunately, there's no mention of why the show was cancelled or any further details about unfinished storylines (like Darth Maul, Ahsoka Tano, etc). It's still a nice little documentary though.

Story Reel: Utapau Arc (1:31:21) is split up into four parts/episodes: "A Death on Utapau," "In Search of the Crystal," "Crystal Crisis" and "The Big Bang." They total an hour and a half of footage that had been reviewed by George Lucas and Dave Filoni, ready to be finished into ready-to-air episodes (but obviously never were). Ultimately, they're unfinished previs-quality animated stories featuring the actors' voices as well. In this story, Obi-Wan and Anakin go to Utapau to investigate the death of a Jedi. The first episode has them fighting Grievous's guards to download info from their memory banks, while the second episode has them continuing their investigation, where Anakin expresses his anger for Ahsoka leaving the Jedi Order and talking about it with Obi-Wan. Interestingly enough, Anakin asks how Obi-Wan would feel if he disappointed him, to which Obi-Wan reassures him that he never will. It then has a fun banter-filled skirmish with Anakin and Obi-Wan escaping from a ship as they use blasters to retrieve their lightsabers. The third episode has a lot more action (and entertaining banter), with some brutal deaths of Utapauans at the hand of Grievous, and it concludes with some more fun moments as they retrieve a large stolen crystal, not unlike the kind that are inside lightsabers. Overall, it's well worth watching despite the unfinished animation.