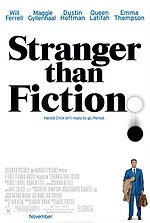 - for some disturbing images, sexuality, brief language and nudity. 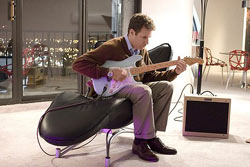 Will Ferrell plays Harold Crick, an IRS Agent whose world is turned upside-down when he begins to hear his life being chronicled by a narrator only he can hear. The Narrator, Kay Eiffel (Emma Thompson), a nearly forgotten author of tragic novels, is struggling to complete her latest and best book, unaware that her protagonist is alive and uncontrollably guided by her words. Fiction and reality collide when the bewildered and hilariously resistant Harold hears the Narrator say that events have been set in motion that will lead to his imminent death. Desperate to escape his fate, Harold seeks help from eccentric English professor Dr. Jules Hilbert (Dustin Hoffman) and finds unexpected comfort in a burgeoning romance with a defiant audit subject, Ana Pascal (Maggie Gyllenhaal). Unluckily for Harold, Kay's impatient publishers have unleashed a stern assistant named Penny Escher (Queen Latifah) to help the author finish her book and finish off Harold Crick. (from MovieWeb.com)

SNL alumnus Will Ferrell has made a name for himself as one of the premiere comedians of today, starring in blockbusters like Elf, Anchorman, and this year's Talladega Nights. In the same way that fellow comic Jim Carrey has stretched his limits to try his hand at more serious, dramatic roles, Ferrell has snatched up a few chances recently to try new things. Marc Forster's latest project, Stranger Than Fiction is Ferrell's own Truman Show, showcasing Ferrell's dramatic talents as he plays a much more subdued, everyday man who tries to get more out of his routine life.

Stranger Than Fiction is a brilliant concept about a man named Harold Crick who discovers his life is basically written by an author who is suffering from writer's block and is trying to find out the best way to end his life for the story. The author has no clue he's real and Harold has no idea why there's a voice only he can hear that is narrating his every move. When he finds out his life is doomed, he begins to rethink his daily routine and seeks out to accomplish all the things he wanted to do and feels he's missing in life.

Ferrell steps into the shoes of IRS agent Harold Crick, a man who loves numbers and lives a life of structure and precise timing. His daily process is lonely and mundane, and it isn't until he discovers his time may soon be up that he gets the push to discover more from life. He seeks the advice of a literary professor, trying to decide who the author in his head is and if he has a chance to change his fate. Forster mixes plenty of drama, romance, and comedy into the film to keep the audience guessing just what kind of story Crick's life will end up being. Stranger Than Fiction takes a sincere look at meaning and purpose in life, sacrifice, love, and seizing the day. Ferrell's subtlety in delivery makes Harold Crick feel more realistic and easy to relate to. Thompson is perfect as a semi neurotic author suffering from writer's block while Hoffman offers some dry humor, with a standout scene being when his character, Dr. Hilbert, asks Crick a series of bizarre questions to decipher what kind of story he might be living out. Maggie Gyllenhaal's Ana Pascal is rough, abrasive, and a polar opposite to Crick, turning out to be a likable disruption for his organized world, ultimately complimenting his personality. 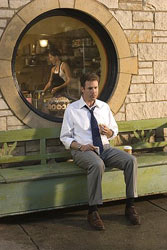 Content wavers throughout the film. Language is sparse, with the worst being a mumbled "f" word from Dr. Hilbert. A handful of other colorful phrases are joined by the most pointless and random, not to mention flat-out unnecessary, scene of nudity when we see Harold and Dr. Hilbert talking in a men's locker room. Each time the camera focuses on Harold, we see out-of-focus shots of older men showering behind him (Harold and Dr. Hilbert are fully dressed). No explicit nudity is seen as shower poles block their privates, but as Crick and Hilbert exit the locker room, they pass through the shower, and we see each of the showering men's bare butts in plain view. Pointless, awkward, and devoid of sense, the scene doesn't even fit into the film. Aside from this, there's a heavy make out scene between Harold and Ana that leads to another scene with them in bed together, continuing Hollywood's need to glorify sex outside of marriage. Finally, some violence is present as Thompson's character Kay envisions committing dying in different ways while trying to figure out a way to kill Harold for her book (none are graphic). We also see a shocking scene where a person is suddenly hit by a bus and has blood on their face. All of this may sound like a lot in one paragraph, but to add insult to injury, so much of the film gets by without a swear word or objectionable content that when it does happen, it may make you wonder why the filmmakers thought it necessary to include it. It's a really sweet and heartwarming story that really doesn't need the junk, which just keeps it out of the "family film" category. Forster proved with Finding Neverland that he's capable of making a family-friendly movie, so why not let Stranger Than Fiction be enjoyed by a larger audience?

Stranger Than Fiction's story itself is smart and clever, keeping the audience guessing up until the final key stroke of a typewriter where it might go next. I couldn't help thinking about my own life and own goals I've put off while watching Harold accomplish what he'd always wished to, and feel like there is something to take away from the film. Its execution is also cleverly done. Using lines and grids as in technical drawings, the narrative creates a unique way of painting a portrait for Harold Crick's life - giving the viewer a clear window into his day-to-day. Well-acted and well-written, Stranger Than Fiction has one of the better original stories to come out of Hollywood this year.

Overall, I really enjoyed Stranger Than Fiction, but felt it offered a bit more inappropriate content than it needed to (but isn't that often the case?). A fair mix of drama and comedy, Marc Forster's latest film is food for thought about the rat race of life and one that the family might enjoy if viewed on a DVD filtering service like Clear Play.

Sex/Nudity: When Harold meets Ana, he hears Kay's voice in his head describe how he longs to sleep with Ana and stares at her chest. When he realizes this, so does Ana and she calls him on it; As a clothed Harold and Dr. Hilbert talk in a gym locker room, we see several out of focus shots of men showering behind Harold's head. The shower poles block any explicit nudity, but when the two men walk through the shower, we see several of the men's bare butts; Ana and Harold make out heavily at her place and she takes off her outer shirt and starts pulling off his, but the scene ends before they go any further. We then see them lying in bed after having slept together; In a later scene we see Ana and Harold lying in bed clothed and talking, but nothing happens

Alcohol/Drugs: Kay is seen drinking in a scene, Ana and Harold have wine in another.

Blood/Gore: Although not "bloody" or "gory," we hear Harold peeing into a bottle and then later see the container on the floor filled with urine; While Harold is watching TV, there's a brief shot of someone exaggeratingly puking into a bucket; A person is hit by a bus and thrown to the ground. We see some blood on the bus windshield, the person's face, and briefly some around their head on the ground where they lay.

Violence: Kay imagines jumping off a building; Kay imagines driving and swerving to avoid hitting someone, losing control of the vehicle, and driving off a bridge into water and drowning; A crane suddenly rips through Harold's apartment building by accident, destroying some of his room; A person is hit by a bus very suddenly and thrown to the ground. Disclaimer: All reviews are based solely on the opinions of the reviewer. Most reviews are rated on how the reviewer enjoyed the film overall, not exclusively on content. However, if the content really affects the reviewer's opinion and experience of the film, it will definitely affect the reviewer's overall rating.