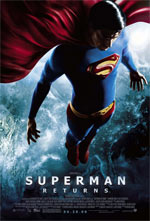 - for some intense action violence.

Following a mysterious absence of several years, the Man of Steel comes back to Earth in the epic action-adventure, Superman Returns, a soaring new chapter in the saga of one of the worlds most beloved superheroes. While an old enemy plots to render him powerless once and for all, Superman faces the heartbreaking realization that the woman he loves, Lois Lane, has moved on with her life. Or has she? Supermans bittersweet return challenges him to bridge the distance between them while finding a place in a society that has learned to survive without him. In an attempt to protect the world he loves from cataclysmic destruction, Superman embarks on an epic journey of redemption that takes him from the depths of the ocean to the far reaches of outer space. (from MovieWeb.com)

Although it's been a near impossible task for the past decade for Hollywood to pull together a new Superman project, the fifth feature film about the popular comic book hero has finally made it to the big screen. With an all new cast, we're treated to a modern revival of this legendary icon.

I must preface this review by saying that although I have seen the previous four installments with Christopher Reeve in the red boots, it's been quite some time since I've seen them, therefore I do not remember the films enough to compare them properly to Superman Returns. Since watching the new film in theaters, I was able to revisit Superman: The Movie on DVD with a lot more appreciation -- for both the new film and the original. I've been following some of the drama that has churned behind the scenes as directors signed up and were passed by during the process of preparing for a new installment -- even the revolving door of prospects for who would eventually don the blue suit and red cape again. The end result finds acclaimed X-Men and X2 director Bryan Singer at the helm and the rather unknown mid-twenties actor Brandon Routh in the title role. The end result? Well, let's take a look... 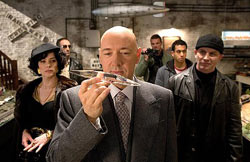 Superman Returns is said to be taking place five years after the events of Superman II, ignoring the existence of the often scorned Superman III and Superman IV entirely (and, from what I remember, for good reason). Off the bat, Routh looks the part enough to take over for Reeve, although it's hard to picture anyone else but Reeve in the suit. Routh clearly mimics some of Reeve's mannerisms as Clark Kent, especially in some sequences that fondly reminded me of the previous films. I appreciated Singer's regard for continuity like that. Routh plays the role a lot more serious and stiff than Reeve had. Perhaps its to show his growth as an adult, but Routh seemed to lack more of the personable, human quality that Reeve naturally possessed. With that said, however, Singer also seems to take a lot of liberty in exploring the drama and relationships of characters, particularly the tension and love angle between Superman and Lois Lane. For starters, and to complicate things, Lois now has a child and is living with a man she isn't even engaged to, but who is apparently the father of her little boy. This plot element sort of smudges the naively innocent view I've always had of Superman and Lois's relationship. Although I'm not schooled enough in Superman's history to be a fair judge of this, it just put a slight damper on things for me -- especially since Routh looks so young and plays the part so wholesomely.

Singer seemed to be trying to take pointers from what works so well with the Spider-Man films in the deeper exploration of relationships and the tension of Lois being pretty displeased with Superman's prolonged absence, and her now having another man in her life. From this also comes a strong theme of Earth needing a savior and Superman being sent by his father to people to fulfill this need. Through this, it's almost impossible to not feel this messianic symbolism, but it doesn't necessarily feel liked a forced message. With Superman's heroic persona and complex alien origin (he's not of the world but must live among them to help them), it almost flows naturally from the story.

I was curious how the rest of the cast would fair in this updated installment. Well, in addition to a successful performance from Routh, Kevin Spacey turns in a winning turn as the notorious Lex Luthor, bringing plenty of fun and eccentricity to his character. While Gene Hackman will always be remembered for his original go at Lex, Spacey is an inspired choice to follow him up. Kate Bosworth is adequate as renowned reporter Lois Lane. Instead of being hard-nosed and all-business like Margot Kidder's Lane from the previous quartet of films, Bosworth brings a distinct youthfulness to the role. And even when she becomes somewhat of a damsel in distress, she surprisingly holds her own well. Bosworth wouldn't be my choice for the role, but she does fine nonetheless. But Kidder and Reeve clearly had more on-screen chemistry together. Maybe Bosworth and Routh seem more awkward together because of her newfound "you left us" grudge against Superman, but when the original films are compared to the new film, the pairing of the two new leads doesn't measure up.

Singer handles the story with care, pacing it to a two and a half hour length. Although it felt long at points, especially when he'd hold the camera on a shot several seconds longer than needed (yet other scenes would be awkwardly abbreviated?), I admit I didn't want the film to end. But what felt like the weakest link in the film was Luthor's evil ploy for world domination. The plan he devises makes little sense, despite being an ingenious attempt for defeating Superman, but is forgivable as a means for providing some great action sequences in the film. Singer pays homage to Superman: The Movie by borrowing some dialog in the film (and Luthor's love for real estate), but his latest sinister plot just seems too over-the-top and illogical even for Lex. In a sense, the idea is so ludicrous that I'd expect it from Pinky & The Brain more than Lex Luthor. But Spacey plays Luthor with such a delightfully mischievous wit that nearly anything he could devise would be fun to watch play out. 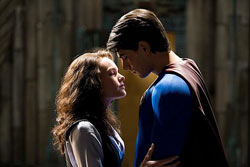 2006 allows more to be done with Superman visually than ever before. Unfortunately, this isn't always carried out to its fullest potential as some FX shots fair better than others. This robs some scenes of the reality Singer was trying to bring to the series, but never really all-out spoils anything. Despite some of the moments being strikingly CG, it's sequences like Superman saving a doomed airplane, being shot at pointblank range, or the sight of a ship tearing in two and sinking that remain impressive and exciting.

Finally, content is mostly mild for a PG-13 action superhero flick like this one. We only ever see a small bit of blood on Superman's hands and on his side as the extent of the gore in the film, and only a handful of minor cuss words are present. I appreciated Singer's sensitivity to content as he knew when to cut away from a scene or just not focus on an aftermath to make the movie a little more family friendly. Still, some scenes may remain a bit on the intense side for younger viewers, but there isn't anything particularly alarming present.

Overall, Bryan Singer did a fine job bringing Superman back to life with Superman Returns. Finely casted, acted, and executed, Superman Returns should be enough of a breath of life for the franchise to warrant a more frequent revisit to this classic hero.

Sex/Nudity: In arguing with her boss that she rather cover a story about a recent blackout than Superman, Lois says "I've done Superman!" which causes Jimmy to snicker. Lois corrects herself by reiterating that she has "covered" him; Although we never see anything sexual, we learn that Lois lives with her boyfriend Richard unmarried and share a son together;

Alcohol/Drugs: Some characters drink casually during the film.

Blood/Gore: We see a little dog eating bones, which prompts Kitty to wonder aloud, "Weren't there two of them?", implying that the one dog ate another just like it (and we see some remains of it there); Superman has a little bit of blood on his fingers from being hit while near kryptonite; We see a slightly bloody cut in Superman's side a few times and later see a brief closeup of the wound.

Violence: Lots of comic book action. We see a plane out of control and tossing its passengers around; A person falls from a building but is caught by Superman; We see a person's car running out of control through the streets before Superman saves it; A man is crushed to death by a piano (nothing graphic is seen); A large rock crushes two men to death (nothing graphic is seen); A man is severely beaten by a few other men (not bloody or graphic); A man unloads a large machine gun on a crowd of police and then onto Superman, but the bullets bounce off; A man shoots Superman in the eye, but he bullet bounces right off without a mark; A man is stabbed in the back a couple times with a shard of rock (we later see the small wound briefly); etc... Disclaimer: All reviews are based solely on the opinions of the reviewer. Most reviews are rated on how the reviewer enjoyed the film overall, not exclusively on content. However, if the content really affects the reviewer's opinion and experience of the film, it will definitely affect the reviewer's overall rating.