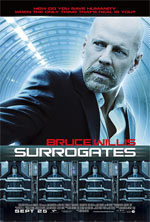 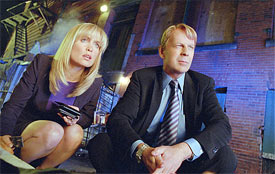 People are living their lives remotely from the safety of their own homes via robotic surrogatessexy, physically perfect mechanical representations of themselves. Its an ideal world where crime, pain, fear and consequences dont exist. When the first murder in years jolts this utopia, FBI agent Greer (Bruce Willis) discovers a vast conspiracy behind the surrogate phenomenon and must abandon his own surrogate, risking his life to unravel the mystery. (from MovieWeb.com)

In 2005, director Michael Bay presented audiences with blockbuster The Island, a film that blended a great sci-fi premise involving human cloning with Bay's characteristic over-the-top action sequences. While the story was a thought-provoking one about cloning and the definition of when a life is considered a life, Bay's execution was schizophrenic at best. For 2009, director Jonathan Mostow (U-571, Terminator 3) offers Surrogates, a story about people enlisting the aid of robots to allow them to live their lives virtually. Mostow's direction is considerably more consistent, and the end result is a pretty satisfying sci-fi action thriller. 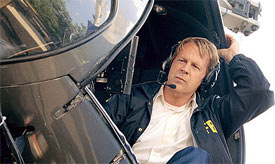 In Surrogates, Bruce Willis plays FBI agent Tom Greer, one of the billion people living in the world through the use of a robot surrogate. With this robotic host, people can live carefree and without concern for injury, disease, or even death. The world has become a cold and vain place to live in, despite being almost crime free at the same time. So when two surrogates turn up dead, with their hosts also having been killed in the process, Greer decides to get to the bottom of it. What unfolds is a murder mystery that involves tracing things back to the source of the robots, the fanatics who oppose surrogacy altogether, and the possible annihilation of all surrogate users. Mostow does a fine job balancing the action, story, and even human element in this unique sci-fi flick.

It may be tempting to write off Surrogates as I, Robot meets Terminator meets The Island, but the film is done in such a way that it feels rather fresh throughout. Willis may kick things into action gear at times here, but he refrains from giving audiences a fifth outing of John McClain or too many of your typical Willis moments (he's a little bit more like Jack Mosely from 16 Blocks here instead). Greer is tormented by the loss of a child and the distance that has grown between him and his wife, Maggie, who has sought solace from her loss in the immersion of her surrogate life. While the story gives literal illustration to the escapism of technology and getting lost in entertainment or the dangers of living for pleasure, there's certainly a real danger to the way people tend to find ways to hide from the pains and stresses of life. While Greer was dealing with an actual robot as direct separation from his wife, it's sadly not unrealistic for people to build similar proverbial walls when avoiding dealing with pain or relationship tensions. 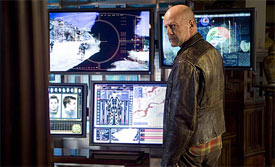 It's difficult to discuss the plot and content of Surrogates without giving much away. As far as content goes, and be warned, there may be a little bit of spoiling going on here for some of you, the worst of the violence is when we see the aftermath of how people die while connected to their surrogate. We see the robot victims with blown out eyes, which then leads to the actual human having blood running from their eyes, ears, and mouth. The blood often looks black when shown, but there is at least one time we see it shown as a vivid red. It could have been shown more explicitly, but it's still rather intense here. The bulk of the violence is robot-related. The robots look very realistic as humans, so it's almost as if the violence is being done to humans. We see a robot surrogate with its arm blown off, and spurting green liquid from the wound. Another time, we see a robot shot in the head which then oozes such green goop through its head of hair. A couple other times, we see robots wounded or severed with robotic parts showing through the human-looking body and some green goo around the metallic pieces. In another instance, a human punches and kicks the face of a surrogate until its human-like face has torn off, revealing the robotic face. Another non-violent but creepy shot shows a beautician removing a surrogate's human-like face (to have cosmetic work done to it. This is the shot in all the trailers and commercials of it being placed on, but it's actually reversed in the film). We see several shots of robots' eyes blow out like glass, and there's a mass shot of human-like surrogates just laying lifeless on the ground with their eyes open. Although entirely nongraphic, it's a bit disturbing and rather creepy. Lastly, language and sexuality. The trailer - to me - eluded to a possible great deal of sexuality. Thankfully, there's just some sensuality when we see a bunch of surrogates dancing in a nightclub and two of them emerge kissing and groping a bit, but the extent of it ends there. For language, there's very little, but there are a few "s" words, a use (or two) of "J-sus," and a couple other colorful words or phrases. It could have done without even what was included, but it's surprisingly light for such a movie.

For a sci-fi action thriller with a murder mystery angle and even some food for thought, Surrogates excels where many such movies these days seem to fail. However, its content - especially the violence - limit its audience considerably and warrant the exercise of caution before viewing. Some of the images will certainly stick with some more than others. The trailer is a pretty good example of the kind of content you're going to see, but ultimately, expect it to be an intense ride (especially for those sensitive to violence). When all was said and done, it was great to see Willis at it again in a new action role which brought enough human element to his character not to feel as lifeless as the surrogates themselves. Kudos to Mostow for another strong action film.

Sex/Nudity: The film opens as a young surrogate blows off an outing at the opera to go to a nightclub instead. When he walks in, we see a sea of male and female surrogates dancing and occasionally caressing each other. He dives into the sea of robots and starts dancing with them. It then flashes to him leaving the club into an alley with a female surrogate, making out with her and caressing her. The scene ends there; We later discover that the female surrogate was literally run by a big heavyset man (who had chosen the lifestyle of a beautiful female surrogate); While arguing with a female lawyer, Greer quips, "I don't know who you are. You could be a big fat guy with his d*ck hanging out for all I know"

Alcohol/Drugs: There's a sequence where Maggie and several other surrogates are partying at her apartment. They are passing around an electrical device that gives the surrogates (and apparently their human hosts) a jolt of pleasure; We find out that a person is taking all kinds of prescription drugs to deal with emotional pain

Blood/Gore: After being hit with a device, we see two surrogates with their eyes blown out and shattered eyes (like glass); We see two human victims who died while attached to their surrogates who have blood (which looks kind of black) streaming from their eyes, ears, and nose; We see photographs of these victims hanging up behind someone speaking; We see a robot after it has been hit by a car and it is cut in half with green ooze and robot parts exposed at its midsection; A device causes the eyes in a group of robots to explode, as well as the pilot of a helicopter. After it crashes, we see another robot with its arm missing and robot parts exposed, as it spurts green fluid and ooze from its severed joint; We see a man with blood coming from his nose and ears but he is alive; We see a burned and charred surrogate strapped to two pieces of scrap metal as if it were crucified; A man is kicked and punched while on the ground and has a resultant bloody face. We later see their face with scrapes and it for most of the rest of the movie; A man punches and then kicks a surrogate's face until the skin is off of it and we see the robotic face and some green good underneath; A surrogate is shot and we see the metallic chest with some green liquid around it; A man is killed and set aflame on top of a funeral pyre. We see the body's hair burn up but flames in the foreground hide any gruesome details; A man shoves an object into the back of a surrogate's head and uses something to flip off a memory chip plate. We later, and briefly, see the exposed plate and some green goo leaking from it; A surrogate is shot in the head and we see green goo ooze out of its head through its hair; We see a surrogate's eyes explode and then we see the human afterwards with blood splattered around the head in its chair and some blood on their face

Violence: In addition to the above "Blood/Gore"... We see a person asleep in their bed at home and a person looking at them outside their window. The person then sneaks inside, peeks in on them in bed, and proceeds to shoot them dead. (We don't see the impact or the victim after being shot); We see surrogates being used on the battlefield with some being shot and killed; A surrogate grabs a man's arm and squeezes, so he shoots the surrogate until it stops working; A man drives a car wrecklessly around a city and mows down a series of surrogates; *SPOILERS AHEAD* We see a lot of creepy looking deactivated surrogates that caused car accidents, etc. All of them have their eyes open; A man takes a suicide pill and dies; and some other action violence Disclaimer: All reviews are based solely on the opinions of the reviewer. Most reviews are rated on how the reviewer enjoyed the film overall, not exclusively on content. However, if the content really affects the reviewer's opinion and experience of the film, it will definitely affect the reviewer's overall rating.