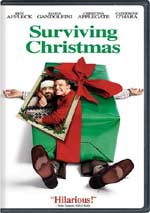 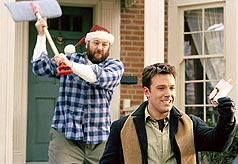 Facing another Christmas alone, Drew Latham (Affleck) decides to go back to his idyllic childhood home to spend the holidays with family. There is, however, one problem: the people living there now are not Drews family. Nevertheless, Drew has his mind set on an old-fashioned family Christmas, and the fact that the "family" in question, the Valcos, are complete strangers, isnt about to put a crimp in his plans. Offering them a small fortune, Drew bribes his newfound "parents" (Gandolfini and OHara) to let him spend Christmas in their home, pretending to be part of the family. Just when the Valcos begin to question if any amount of money is worth being dragged all over town on such traditional family holiday excursions as Christmas shopping and the requisite choosing of the Christmas tree, their eldest daughter Alicia (Applegate) comes home for the holidays, with no intention of adopting a new "brother." (from MovieWeb.com)

I've always loved Christmas movies. From White Christmas to A Christmas Carol to even last year's Elf, I always enjoy a good holiday film. I must admit that when I first saw a trailer for this year's Surviving Christmas, I thought it looked like a pretty humorous setup and I was interested. However, the end result is like getting a Christmas gift you'll wish to return.

Surviving Christmas builds its story around a millionaire played by Ben Affleck who is used to spending Christmas without a family and decides to rent one out this year. At first, the setup appears to have some promising opportunities for humor and cleverness but the movie only drops the ball almost every chance it gets. In fact, the filmmakers aren't trying to make a holiday movie, instead it's more of some sort of irreverent comedy you wouldn't want your family to see. 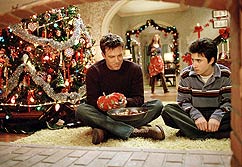 I actually thought seeing an over-the-top and rather goofy Ben Affleck was pretty amusing. Affleck deliberately acts goofy and airy to contrast the rugged and abrasive James Gandolfini and it made several scenes quite fun to watch. Unfortunately, the film tries to force Affleck's character of Drew into situations he doesn't fit in. The love story subplot of the film is so contrived and paint-by-numbers that you feel like it was thrown in because that's what the filmmakers felt they had to put in. In fact, that's most of what Surviving Christmas is -- random, messy bits of material thrown together without much purpose.

Where the movie really falls flat first and foremost is in its content. For a Christmas film, there isn't much about it that really can give the viewer a sense of holiday spirit. While it'd be too much to expect anything more than the typical commercialized, secular view of the holiday, it shouldn't been too much to ask for at least a film you could watch with your family. The language includes a few "s" words and several awkward sexually-themed moments which just isn't right for this kind of movie. Once they start introducing the younger son of the Valco family that Drew stays with as being a kid who stays in his room downloading adult photos from the internet, you have to wonder what in the world the filmmakers were really thinking. From there, it only gets worse as Drew treats the mother of the house, Christine, to a photo shoot, as a favor, that includes racy photos in an over-the-top and out-of-place sequence.

The movie has a lot that's out of place. After the film establishes Drew as renting out the Valco family, he tries to make it feel more like home and hires an actor to play his grandfather named Doo-Dah. It throws a wrench in the storytelling, which just makes for some truly painful-to-watch scenes - including a scene where the family reads from a script. Some of the plot developments are just too forced to really run smoothly.

I could really spend quite a bit of time running the film into the ground in this review but the movie does it for itself already. I enjoyed most of the opening of the film but when the minds behind the flick try to turn it into a screwball comedy (which worked decades ago but not so much anymore), the movie just falls apart like an undercooked Christmas cookie. The adult themes render this unwatchable as a holiday family film and those scenes are just plain not funny. Producing the film for a target audience of families would have made it better but instead we have what is this year's Surviving Christmas.

Sex/Nudity: We see Brian looking at porn on his computer in his room (nothing explicit, but the exaggerated colors and writing on some of the sites he sees imply it). When finding out Drew will take over his room, Brian asks "But how am I supposed to... study?" (meaning he won't be able to visit porn sites). Brian draws with his finger a cartoon outline of a pair of woman's breasts on the inside of the car window through the frost on it. Some random sexually-related dialog and innuendo is made throughout the film. Doo-Dah walks in on Brian looking at porn and makes comments about how in his day he didn't have access to that kind of material and would have to pay a girl to show them "her business". We only see woman in seductive attire but nothing explicit until they download an image of a woman (starting with her legs up in the air) and we see her face, revealing it's Christine (i.e. Brian's mother). The camera keeps the lower half of her body out of view, but it's implied they both see her lower-body nudity. Later, everyone walks in on Brian still staring at the image. Christine shows a nude picture of Drew as a little kid (but it's really Alicia) and a comment is made about his genitals not being there. Drew tries to cover it up by saying it was so long he had to tuck it back behind him. Some incest comments are made when Alicia and Drew are seen kissing. We see Drew looking out his window, watching families on Christmas morning through their windows in an apartment complex. He pauses on a view of a man standing all alone (thinking he too is alone on Chrismas), but then another man comes walking up to him in a bathrobe and they kiss.

Alcohol/Drugs: Drew pushes an ad for spiked eggnog and we later see him with a glass of it; several people have beers and champagne in the film; we see Doo-Dah smoking what apparently is a joint.

Violence: Only comedic violence. Tom slams Drew in the head with a shovel; Drew falls off the banister when it breaks; Drew throws snowballs at Brian to which Tom takes over and we don't see any hitting Drew but later see his face red as Tom apparently threw iceballs at him. A character throws a Christmas gift at Drew; A character throws a computer monitor off the stairs, destroying it. Disclaimer: All reviews are based solely on the opinions of the reviewer. Most reviews are rated on how the reviewer enjoyed the film overall, not exclusively on content. However, if the content really affects the reviewer's opinion and experience of the film, it will definitely affect the reviewer's overall rating.