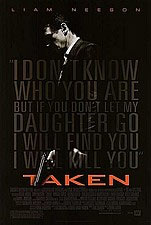 I dont know you who you are. I dont know what you want. If youre looking for a ransom, I can tell you, I dont have money. But what I do have are a very particular set of skills acquired over a very long career in the shadows, skills that make me a nightmare for people like you. If you let my daughter go now, that will be the end of it. I will not look for you, I will not pursue you. But if you dont, I will look for you, I will find you. And I will kill you.

With these chilling words to a member of a band of kidnappers, former government operative Bryan Mills begins the longest 96-hours of his life  and the hunt for the fearsome organization that has taken his daughter Kim. (from Movieweb.com)

During a time of year where studios dump the movies they have no faith in on moviegoers, it's always a thrill to find the rare gems that enter the mix. Pierre Morel's action thriller Taken is a tense film about a former government agent who goes on a rampage through France after his daughter is kidnapped. It's a nailbiter to say the least, and one with a greater depth than I ever expected.

By "depth," I'm referring mostly to the plot element I didn't realize was a big part of Taken. Liam Neeson stars as Bryan Mills, the retired agent who is desperately trying to make up for lost time and grow closer to his daughter Kim who lives with her remarried mother. X-Men's Famke Janssen stars as Lenore, who is trying to keep Bryan out of her life, seemingly unable to forgive him for not being there when it mattered while they had been together. So when their daughter takes a trip to France with a friend - despite Bryan's misgivings about it - Kim is abducted and her father sets out to get her back. It isn't long before he discovers that Kim will become the victim of human trafficking and the remainder of the film exposes the viewer to the slimey underbelly of an Albanian human trafficking ring rooted in Paris. It's a brutally eye-opening experience for anyone not familiar with the disgusting practice. And the way Bryan infiltrates it displays some truly disturbing images.

With that said, due to the topic of human trafficking and prostitution, we see many tripped out girls with runny makeup and such passed out in beds or waiting to be taken advantage of. It's sad, but the payoff comes in Mills' heroics as he mows down all who stand between him and his daughter. Neeson's character in Mills and his fighting tactics and skills are rather reminiscent of Jason Bourne from the Bourne series, but Taken seems to feature as many action sequences and fights as probably two of those films put together. Mills is on a warpath and will ultimately stop at nothing. You can't help but root for him - and for the fall of the inhumane creeps and their trafficking ring - from the film's start to finish. And Mills is no superhero or a saint. He uses some truly questionable methods to get the job done. But in the end, most of his victims had what was coming to them (except for maybe one rather innocent bystander, which I can't divulge but it seemed a bit too ruthless).

The sexual content is never glorified. While comedies cheapen the act and a lot of R-rated films showcase and abuse it, Taken tries to show as little as possible while still getting the point across. In the beginning, before the trafficking subject matter comes into play, a teenage girl makes a comment to another that she hopes to sleep with one of the French strangers they had just met, and encourages her friend to lose her virginity in Paris. The film never approves of this mindset, but it's disturbing to realize young teens often think this way. And once the human trafficking plot unfolds, we see numerous women that appear drugged lying in beds (in dimly lit rooms), appearing sweaty and scantily clad (but never nude). It's also never done to seem sexy or alluring. If anything, it's intended to be the opposite. You feel for these young girls in this situation. There's also one scene, however, where we see bidding on a couple girls take place, and one appears to be in her underwear in a thong, while another has a very skimpy top and a bikini bottom. It's certainly the most revealing moment. Language is scattered but also an issue. There aren't any "F" words, but there are a handful of typical colorful words found in a PG-13 action film like this one. Lastly, there's a great deal of violence. As stated before, it's probably at least two Bourne films worth of action. Only a couple moments show any blood, while everything else is pretty brutal hand-to-hand fighting, shooting, knife fighting, and even a scene where Mills interrogates a guy by electrocuting him. The end result gives Taken a very intense and gripping feel. In fact, the whole film feels like it may have been rated R at one point, just trimmed for content here and there to clear a PG-13 rating. But it's the subject matter that makes this one especially adult in theme.

Taken is an impressive thriller. I've heard some about human trafficking before, but I have to admit this action film was a tremendous reality check for me. I know I'm not alone in my ignorance about this horrific practice, so in a way, I applaud director Pierre Morel's attempt to get the word out in a mainstream format. Be warned, though, that this is a truly intense movie with a very mature theme. This isn't one for teens (and parents of teenage daughters especially will probably want to lock them in their rooms for a couple years after seeing this!) and certainly not for families. The film also could have done without the language and intense violence, but Taken does a pretty good job raising awareness of human trafficking without going overboard in exploiting the subject matter just for entertainment value (I suppose there's plenty of action for that!).

Sex/Nudity: Amanda comments to Kim that she intends to sleep with a French guy they just met, which shocks and disgusts Kim. Amanda then encourages that she should find someone as well, stating something like "where better to lose it than in Paris?"; Bryan's friend jokingly uses the phrase "hard-on" twice while asking if his ex-wife Lenore still wants him; We see a famous pop star in her bathrobe (which is not revealing); We hear that Marko, Kim's kidnapper, takes young girls, addicts them to drugs and then uses them for prostitution; We see a group of hookers on the street in sexy attire, trying to get customers. Bryan approaches one and asks about their rates in an attempt to get information as to the whereabouts of their headquarters; Bryan pays to enter a prostitution room full of curtained-off sections where guys are going to meet with girls. Bryan searches all of the little sections, and we briefly see views of the drugged women lying in semi-skimpy attire (but it's dimly lit). We briefly see a man in his undershirt with a girl (we don't see anything they're doing explicitly), and we briefly see some in their underwear when they flee the room; We see a girl in a bra and thong who's on display to be purchased for sex; We see Kim in a thong and revealing bead-like top draped over her chest. We later see her in a bra in a room with a man who bought her for sex

Alcohol/Drugs: Many of the girls in the trafficking ring appear drugged and out of it; Some people have drinks at a party; There are beer cans on the table that some thugs are sitting at; A woman serves wine at dinner; A man pours champagne into another man's glass; Some of Bryan's friends show up at his house with alcohol for a sort of guys' night

Blood/Gore: We see a closeup view of Bryan putting a small IV needle into someone's arm (it appears to really break the skin); While checking rooms in a house where a group of girls are drugged, lying in bed, Bryan finds a dead girl with her eyes open and some puke around her mouth; We see a small bit of blood on some victims' clothing as their shot; When Bryan shoots a man in an elevator, we see him slumped over with a little bit of blood on his coat. We then see him again dead with a lot more blood on his face and shirt; Bryan has a little bit of blood on his face after some fights; There may be hints of blood on some other villains only very briefly seen

Violence: Bryan beats up a man who is holding a knife; A couple thugs violently seize two girls; Bryan beats up and interrogates a guy who runs away and is accidentally and very suddenly hit by a large vehicle (which we briefly see the impact of); Bryan beats up another man and knocks him out; In many scenes, Bryan quickly disarms and knocks out men with just a couple blows; There's a car chase where a bunch of vehicles are destroyed and a large explosion occurs. A car crashes into a construction vehicle, killing the driver; A man roughs up Bryan a little bit for costing him money; A man spits in Bryan's face twice; A man is strapped to a chair with electrical cables hooked up to it that are connected to the power in a room. Bryan electrocutes him twice and then leaves the electricity on and exits the room (presumably eventually killing him); A man draws a gun on another man who then shoots a woman in the arm (but it's just a flesh wound). The shooter later knocks out the man with the gun; A man is chained to a pipe and is strangled, but manages to break free and shoot or disarm everyone in the room. He then shoots a man down in an elevator; A car races through the streets recklessly; Bryan shoots every thug in a room dead; There's a gun battle on a boat; A man beats up a man and throws him overboard; A man is strangled unconscious; A man hold a person with a dagger to their throat but is shot dead; And other action-related violence Disclaimer: All reviews are based solely on the opinions of the reviewer. Most reviews are rated on how the reviewer enjoyed the film overall, not exclusively on content. However, if the content really affects the reviewer's opinion and experience of the film, it will definitely affect the reviewer's overall rating.