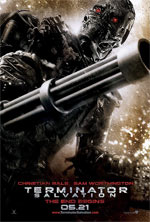 Set in post-apocalyptic 2018, Christian Bale stars as John Connor, the man fated to lead the human resistance against Skynet and its army of Terminators. But the future Connor was raised to believe in is altered in part by the appearance of Marcus Wright (Sam Worthington), a stranger whose last memory is of being on death row. Connor must decide whether Marcus has been sent from the future, or rescued from the past. As Skynet prepares its final onslaught, Connor and Marcus both embark on an odyssey that takes them into the heart of Skynet's operations, where they uncover the terrible secret behind the possible annihilation of mankind. (from MovieWeb.com)

To preface this review, I think it's only fair to mention that due to the first three films' ratings, I've never seen an entire Terminator film from start to finish... until now, that is. Terminator Salvation is the fourth Terminator film, and also an attempt to create a brand new trilogy of films in the franchise. Director "McG," who has previously helmed such films as both Charlie Angels big screen adaptations, and the football drama We Are Marshall, brings a new look and feel forward with Terminator Salvation, continuing the man versus machines story into the post-apocalyptic future world of 2018. 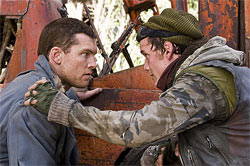 Christian Bale enters the franchise as John Connor, despite seemingly not being the central character in the film. Arnold Swartzenegger's robotic character is replaced by a new one played by Sam Worthington. Sam's character is instead a human named Marcus Wright who was killed on death row and then converted to a machine. Salvation spends the core of the story developing Marcus' character, while Bale's Connor feels more like a hardened, calloused soldier. Bale doesn't really get to do much as Connor besides talk low (or scream loud) and appear intense. He still does a great job with what he has to work with (he sells the character), but ultimately Connor feels sorely underwritten here. Worthington therefore shines as the conflicted sort-of hero that Wright is, while Anton Yelchin plays Kyle Reese and is probably the only other character that feels fleshed out and realized. Both Moon Bloodgood and Bryce Dallas Howard get just enough screentime to get their name in the credits, but they don't seem to particularly add or take away from the story. The story also places Worthington and Bloodgood in a situation where she seems to get attracted to him much, much too quickly, but this may also be partly due to the fact her character exists in machine-driven post-apocalyptic society where everyone is living in war-time mode. Regardless, when the two cozy up, it doesn't feel like a natural character progression.

Apparently Terminator Salvation had been cut significantly to secure a PG-13 rating. While I don't exactly know details about the previous Terminator content, I do know the language and graphic violence had been reduced significantly for Salvation (although rumor has it an unrated DVD is on the horizon). This time around, most of the violence is without blood. The bloodiest moment actually comes towards the film's end when a man pulls a chip out of the back of his head and we see some blood squirt on his hands. Aside from that, the worst of it includes shots of Marcus with chunks of skin missing and his metal skeleton exposed underneath. The scene from the movie trailer, where Marcus discovers he's a machine, shows several views of him shirtless and skin missing on his torso exposing the metal underneath. Later, his face gets torn partially to reveal his metallic skull. When it comes to language, only a handful of obscenities are used, as well as a couple uses of the "S" word and two uses of "S.O.B." (some sources claim an "F" word was muffled, but it's not decipherable enough to be able to state it's really there or not). Blasphemy is thankfully limited to a couple uses of "God" (as in "Oh, God"). Other than that, the violence is intense and the film is pretty dark, so it's not the kind of movie parents will be wanting to take their children to (that may sound like an obvious statement, but sadly, those inconsiderate parents are out there). 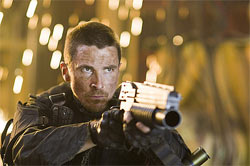 The special effects and the detail devoted to making the post-apocalyptic setting believable help make the concept work visually. Most of the effects in the film are fantastic, right down to a cameo that is slightly dicey in execution, but something done somewhat similarly before in The Mummy Returns bombed horribly, while it works here for the most part. Otherwise, the robots look fantastic and the action sequences not only look good but are pretty exciting. The film may feel overlong for some viewers given its two-hour runtime, but its length gives McG plenty of time to put some story in between the action.

Overall, I found myself enjoying Terminator Salvation a lot more than I expected to. It's not perfect, and as noted before, it could have benefited from more character development for John Connor and a few other characters, but it's a nice way to reintroduce the franchise - and to a new audience. The thematic material is pretty intense, so consider yourself warned, but as a Summer action film, Terminator Salvation delivers. The very end of the film favors a little bit more on the cheesy side, but it's not enough to damage the enjoyability of the film. It'll be interesting to see what the film makers have planned for the already announced fifth installment.

Sex/Nudity: A man passionately kisses a woman (who's a stranger to him); We see Marcus standing in the rain at night nude, but covered in mud (no explicit nudity is visible); Several men surround a woman and threaten her (possibly to do something sexual to her, but it's not specified), and they are stopped before anything happens; We see another nude man, but smoke/haze covers his crotch area, so we don't see anything.

Blood/Gore: We briefly see a needle going into a person's skin; We see the corpses of a couple emaciated humans in a dark cell area, another seems to have a little blood on them; We see a bunch of dead bodies throughout the movie, none are bloody; We see a man with blood on his mouth and face after an explosion. We then see him chained up and when the screen pans back, we see that his torso is bare, but sections of his skin are torn away to reveal a metal skeleton underneath and some visible organs (but it's dark and hard to see). It's also a little bloody. Later, we see part of his face is torn to reveal a metallic skull underneath; A man is attacked by a machine in the water and the water turns red with blood (but we don't see anything gory otherwise); We see a man reach behind his head and begin to scratch at something. We then see a brief shot of him digging into the hair of the back of his head and blood pour onto his fingers, and then him holding a chip in his hand afterwards (it's brief); We see a T-800 terminator bare-chested and start losing some skin as it's shot repeatedly. Its skin then burns entirely off after it has caught on fire; A machine's hand slowly scrapes at a man's face, causing a couple thin lines of blood to appear on his face (they're not deep scrapes); A person is impaled with a metal rod and has blood on his face and some coming from his mouth; We see some bandages on a person with a little bit of dried blood around them; We again briefly see a needle going into a person's skin

Violence: A lot of violence where machines are blown up, destroyed, shot up, etc. In addition to everything listed under Blood/Gore, a man is put to death via lethal injection; We see a helicopter get shot down from inside of the cockpit, from the viewpoint of a passenger on the helicopter; Some vehicles carrying people are blown up (we don't see anything gory, just the vehicles exploding); A woman shoots a man in the leg; Two people shoot Marcus in his metallic chest with a pistol; People hold each other at gunpoint; A helicopter is taken down into a lake by machines and it causes the deaths of a couple men; A huge machine grabs people and places them in a holding box; A terminator fights a couple people and overcomes being burned, shot at, and melted, etc; A person is impaled by a rod, then carried off; Some large buildings are blown up; A man gets into a fight with a terminator that tosses him around and beats him up a bit; and other sci-fi action violence Disclaimer: All reviews are based solely on the opinions of the reviewer. Most reviews are rated on how the reviewer enjoyed the film overall, not exclusively on content. However, if the content really affects the reviewer's opinion and experience of the film, it will definitely affect the reviewer's overall rating.