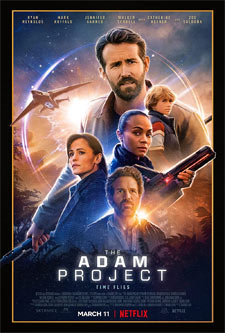 A time-traveling pilot teams up with his younger self and his late father to come to terms with his past while saving the future. (from IMDb)

From the team that brought you the action comedy Free Guy comes the time-bending action "dramedy" The Adam Project, exclusive to Netflix. Like Red Notice before it, The Adam Project is a big blockbuster film that is ready for the big screen but is only getting the small screen treatment (and, coincidentally, both star Ryan Reynolds). Although Red Notice did, in fact, get a very limited theatrical run, The Adam Project doesn't look to be getting even that -- which is unfortunate because it would be a fun one to see on a big screen.

Shawn Levy (who was a B-movie actor back in the day before finding success as a director) made a name for himself with the family friendly historical trilogy, Night at the Museum, but has since been developing edgier PG-13 comedies, like Date Night and Free Guy, and working on popular cult franchises like Stranger Things. The Adam Project falls somewhere between Night at the Museum and Free Guy when it comes to content and heart, with there being plenty of profanity mixed into a story about a family that spans several decades. The Adam Project is named for the same program that a young boy named Adam's father had dubbed that ultimately became a means for time travel. In 2022, a mysterious man stumbles into Adam's backyard with strange familiarities to him. Before long, Adam realizes this man is his future self from 2050 and that time travel isn't just a notion frequently attributed to pop culture, like Back to the Future. Future Adam is on a mission to find his father, who had already died before 2022, and must enlist the help of his 12-year-old 2022 self in finding their dad in 2018. It's a fun, time-jumping sci-fi film that has some deep thoughts on parenting and familial relationships, and the family dynamics that result from the loss of a parent.

The action in The Adam Project is surprisingly fun at times, with most lethal hits resulting in are-they-robots-or-guys-in-suits type bad guys bursting into colorful puffs of dust when they are shot by blasters or sliced by a glowing electro bow staff. Levy takes us through this futuristic 2022 fast and furiously, only pausing for meaningful exchanges between Adam and his future self, or their parents. If there's one thing that The Adam Project suffers from, it'd be its frenetic nature. The viewer barely gets to take a breath between action scenes before something else crazy happens. And it's unfortunate because the emotional character-building scenes are great -- like a scene between 2050 Adam and his mother in 2022, or the boys with their father. 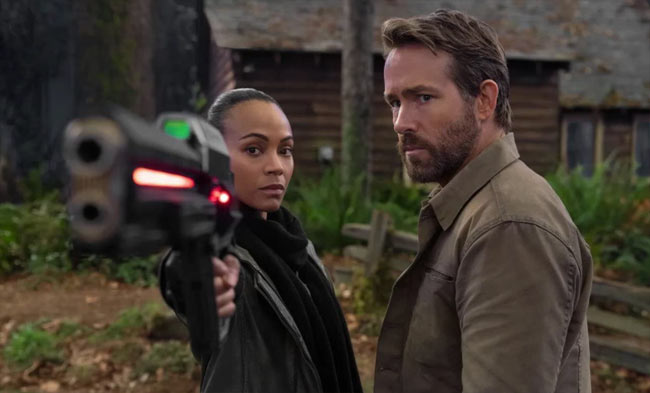 One of the most interesting concepts, to me, was seeing both Adam's converse with each other and share insight about their lives. When 2050 Adam receives a nugget of childlike wisdom from his younger self in 2022, it's fascinating to think about. 12-year-old Adam sees his adult self as mature and fit, but also bitter and frustrated. The young Adam misses his father everyday, while the adult Adam has grown angry toward the memories of his dad. It's such a deep and intriguing commentary about how we perceive things and people that impact our lives as we age, that while one might think our adult self could really teach our younger self a thing or two, our younger self may have just as much wisdom to impart on our adult worldview.

Ryan Reynolds offers up most of his usual comedic shtick in The Adam Project, so if you didn't like him before, this movie may not change that for you. This includes his penchant for frequent profanity and blasphemy, which is disappointing. When I'd heard Levy describe The Adam Project as a great film for the whole family, I'd expected him to hopefully have dialed back on the language, but that's sadly not the case here. All of the main characters have pretty coarse PG-13 grade language, with the 12-year-old Adam surprisingly using two soft takes of the "F" word in the movie. The first is when Reynolds' Adam stops young Adam from finishing "motherf--," and a little later, someone hands the boy a carrot to eat, and he just looks incredulously at his older self and fully mouths "what the f---?!" Otherwise, there are over a dozen uses of the "S" word, 5 uses of Jesus' name in vain, 3 "g*dd*mn," 15 uses of the "a" word and A LOT of uses of "Oh my G-d" (Young Adam repeats it over and over at one point while freaking out). Sexual content is kept to just some heavy kissing between adult Adam and his wife Laura (played by Zoe Saldana) when they're reunited, and a couple crude jokes from Reynolds. There's plenty of action violence, but apart from characters bursting in colorful clouds of dust, there isn't much beyond some bloody scrapes and cuts or bloody noses. The most graphic visual is very early on in the movie when we see adult Adam's gunshot wound in his side a couple times, which we get a glimpse of as he treats it. It's not shown up close too much, but we do get some good enough views of it to make the squeamish squirm. 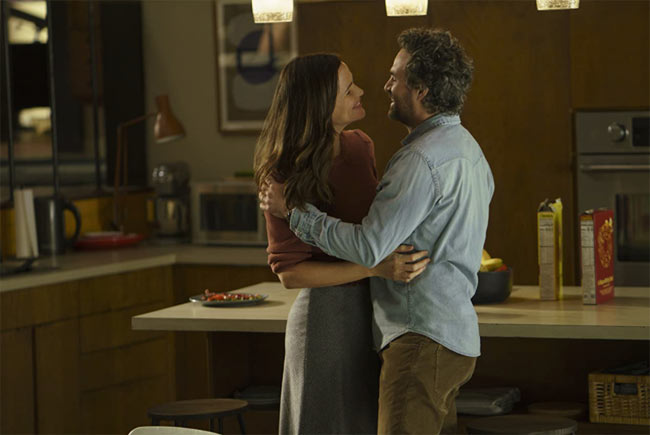 The cast of The Adam Project is solid, too. Walker Scobell plays 12-year-old Adam with a hint of Reynolds' attitude, and it's fun to see the two play off each other. His casting was an inspired choice. Reynolds himself reins in the crudeness just a bit (although it's not quite Pikachu), but if you love him as an actor, you'll be more than happy with his performance here. Mark Ruffalo and Jennifer Garner are great as Adam's parents, and it's kind of fun to see them back on screen together after first appearing together in the 2004 rom-com 13 Going On 30. I loved what they brought to the movie here, and would have loved to have seen a little bit more from both of them. Zoe Saldana is wonderful as Laura, but she also has disappointingly little screentime. Finally, Catherine Keener is fine as Maya Sorian, but it seems like an unusual role for her--to the point of her maybe having been miscast.

The movie teeters on a higher rating for me, but there are some aspects of it that just feel a little... underdeveloped. At a brisk hour-and-forty-six minute runtime, I feel like it actually could have benefited from another half hour to flesh the villains out more and give some of the scenes more time to breathe. Even the 2018 quest in the last act feels surprisingly brief and rushed, and there just didn't seem to be quite enough time to fully get invested into their fathers' work and the villainous plot from his partner. (The de-aging technology used on Catherine Keener feels particularly unfinished, and it's some of the worst de-aging we've seen since it was largely used in 2010's Tron: Legacy.)

All in all, The Adam Project is a fun sci-fi film that almost could have been a family film, but sadly has much too much language and violence to qualify as one. The fatherhood relationships and message of the movie are warm and encouraging, leaving the viewer plenty to think about after the credits roll. The acting is great, it's a funny movie, and it had some fun action sequences too. Although it feels like it could have used a bit more time in the oven to finish coming together, The Adam Project is an entertaining streaming movie that might fall just shy of great but is still a standout nonetheless.

Alcohol/Drugs: Ellie goes to a bar and orders a drink, where adult Adam is also having a drink nearby; Maya pours herself and her younger self a drink; Adult Adam has a beer. Young Adam reaches for the beer and Adult Adam pulls it away (twice).

Blood/Gore: Adult Adam touches his suit and looks down at his glove which has blood on it; Young Adam has a bloody nose from getting punched in the face; Adult Adam has blood on his hand; We see part of a bloody wound through the ripped clothing on Adult Adam; Adam has blood around the wound on his shirt; We see the bloody wound on Adult Adam's side a couple times while his shirt is off; We see Adam dressing and cleaning his bullet wound on his bare skin; Young Adam has another bloody nose; Half of Christos' face is burned and scarred; Louis and Adult Adam have bloody noses after punching each other; Adult Adam and Christos both have bloodied faces while they fight each other; Louis has some blood on his cheek.

Violence: We see adult Adam piloting a ship and dodging the pursuit of another ship; Young Adam runs through the hall of his school, bumping into kids. A bully catches up to Adam and punches him in the face and stomach; Adam briefly plays a flight simulator video game and we see it shooting at things; We see some burnt trees with embers falling in the sky; Young Adam swings a bat at Adult Adam who grabs it and throws it away; Adam throws the bat again when Young Adam tries to hit him with it; Adam almost faints and Ryan catches him by the shirt; The bully punches young Adam in the stomach; The bully slams Adam against the wall, punches him in stomach and knocks him over; Adult Adam pushes the bully against the wall and threatens him; Some bad guys burst through the front door and a grenade blows them backwards; Adult Adam fights bad guys -- kicking and punching them. He uses an electro staff to cause a shockwave blast that blows them backward; Adam continues fighting and blasting bad guys in futuristic suits, who often burst into colorful puffs of dust; During a car chase, a missile from a jet blows up a truck. Another then blows up the ground in front of them; While speeding through the woods, Adam opens a car door which crashes into a bad guy, sending him into a tree; Adam uses his staff to cut a tree, which flies into a guy and he bursts into dust; Laura triggers a bomb that goes off under a truck, flipping it; Laura shoots a rifle at some characters and two bad guys burst into dust; The gun from a ship fires on a person off screen. We later hear that the person was killed; Two space ships shoot at each other; Adult Adam punches Louis in the face. Louis then leaps and punches him back; We see a younger Adam playing the flight simulator game again; A drone blasts some bad guys backwards, then shoots individual ones, blasting them to dust. Adam uses his staff to kill some more into puffs of dust; Louis crashes his car into another one, narrowly missing Adam and flipping a car; A blaster bolt breaks glass, causing metal objects to fly toward a machine; Adult Adam fights Christos with electro staffs; Part of a door collides with a man, knocking him into a machine that explodes; A bullet gets pulled through the air and goes through another person, killing them. We then see another person disintegrate; A building implodes. Disclaimer: All reviews are based solely on the opinions of the reviewer. Most reviews are rated on how the reviewer enjoyed the film overall, not exclusively on content. However, if the content really affects the reviewer's opinion and experience of the film, it will definitely affect the reviewer's overall rating.