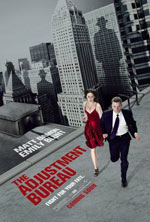 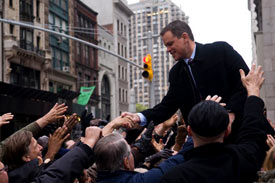 Do we control our destiny, or do unseen forces manipulate us? Matt Damon stars in the thriller The Adjustment Bureau as a man who glimpses the future Fate has planned for him and realizes he wants something else. To get it, he must pursue the only woman he's ever loved across, under and through the streets of modern-day New York. On the brink of winning a seat in the U.S. Senate, ambitious politician David Norris (Damon) meets beautiful contemporary ballet dancer Elise Sellas (Emily Blunt)-a woman like none he's ever known. But just as he realizes he's falling for her, mysterious men conspire to keep the two apart. David learns he is up against the agents of Fate itself-the men of The Adjustment Bureau-who will do everything in their considerable power to prevent David and Elise from being together. In the face of overwhelming odds, he must either let her go and accept a predetermined path... (from Universal Pictures)

Joining films like Minority Report, Total Recall, Blade Runner and even Next is the latest Philip K. Dick story to be turned into a feature film. The Adjustment Bureau, loosely based on the author's short story "The Adjustment Team," stars Matt Damon as David, a politician running for Senate who runs into the free spirited Elise, played by Emily Blunt, randomly one evening. It seems to be love at first sight, but as David soon learns, he isn't the one in control of his own life and those who seem to be don't want him to ever see Elise again. 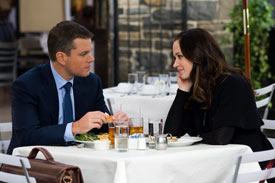 The film takes a pretty sci-fi approach to the higher power belief, proposing a unique concept that a "bureau" of well-dressed men roam the earth, making sure that everyone's life goes according to "the plan." it all sounds a lot like God and a team of angels, but the film never dares to label the bureau boss, AKA "The Chairman" as such. Although the film goes for a realistic approach to the concept, it never feels believable enough to be an actual suggestion of how God operates in real life. However, the film does pose questions about free will, predestination, and the effect that our choices make on our lives and others.

As entertainment, the film succeeds as a decent romantic story fueled by strong actors in Damon and Blunt. The overall pacing may be considerably slower than some viewers may like or prefer, but first-time director George Nolfi opts to develop the story and its characters at their own pace, rather than trying to make it a tense thriller or an action film. The film's finale is exciting (even if the final scene is a bit dissatisfying), mainly as Nolfi keeps the audience guessing exactly where the film, and its central pair, will end up.

The content is definitely of the PG-13 brand. Blunt shouts the film's single "F" word out of anger, while her and just about every other character in the film uses some kind of profanity at some point. Curiously enough, the "angelic" (and I use that term very loosely, mind you) bureau members who do the bidding of The Chairman also use profanity, including the occasional blasphemy. It's a little jarring when you first hear them swear and it seems to distance their characters from being associated as true "angel" figures. There is a surprise car accident involving unimportant characters that shows a man with some blood on his face after the accident, but that's really the extent of any graphic violence. The romance between David and Elise leads to them sleeping together, but Nolfi does a decent job making it a brief scene consisting of close-up head and shoulder quick shots of the two in bed (that's not to condone the inclusion of such a scene, it's just a lot less sensual than, say, the flashback sequence in the recent Liam Neeson movie, Unknown, of which was downright uncomfortable). The sequence was unnecessary to include, of course, but one of the more tamer scenes you might see in a romance flick like this one. 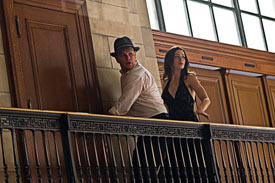 As a story, I found the premise quite intriguing and an interesting puzzle to watch unfold. Some may be uncomfortable with the way the movie handles the subject matter of destiny and a higher power, especially when the film's "heroes" are trying to make their own will become a reality. It's something just about everyone can relate to, but the movie doesn't encourage the truth that God does know what's best for us even when we don't. But by keeping the "Adjustment Bureau" as more of a group of mysterious characters with flaws and not exactly representing our God directly, it helps support the film's plot as more so just fiction and entertainment. Still, the film can sort of be interpreted as offering a man-knows-better-than-God message. And while I don't know the heart or intentions behind the film, I'm hesistant to say that that was ever intended. There's certainly enough to discuss about the film after seeing it, but to delve any deeper here may spoil it for those interested in seeing it. The important thing to keep in mind while watching The Adjustment Bureau is that it's merely fiction, nothing else.

As a romantic film and kind-of sci-fi thriller, The Adjustment Bureau is a good entry into the respective genres, but not a great one, which it probably could have been. It's a film I could see having been done by Christopher Nolan or Michel Gondry, and probably to a greater outcome than what Nolfi delivers; Nolfi instead gives it less of a grand, dreamy theatrical feel and more of a grounded tale set in New York City. It's more than likely that Damon and Blunt's chemistry add considerably to the mix. Damon's David is constantly thrown off balance by Blunt's raw and free spirtied portrayal of Elise. From pretty much the moment they meet, you want to see them end up together and hope that they do. So while The Adjustment Bureau probably could have been stronger (especially in its execution of the resolution), it's a decent late winter/early spring theatrical distraction, if nothing more.

Sex/Nudity: Elise shows cleavage in several of her outfits throughout the movie; We see Elise dancing a few times in a ballet style, but some might find it somewhat sensual at times; David and Elise passionately kiss a few times; We see David and Elise in a head and shoulders close-up montage of them kissing standing up and in bed together while having sex. There isn't a lot of movement, just quick cuts and the scene is rather brief. We see Elise wake up in bed the next morning in a tank top with the covers wrapped around her; We hear about David's past while he is campaigning and hear of a time where he mooned someone, but we don't see the photo

Alcohol/Drugs: We see some characters drinking in a club, including David having a beer (or more?); We see some other random drinking during the film

Blood/Gore: After a sudden car accident involving a taxi, the driver is seen alive with some blood on his face

Violence: David tries to outrun the bureau men and is eventually knocked down and carried into a room where he's held in a chair. He tries to bolt out the door, but one of the guys causes the floor to raise up, tripping him so he falls flat on his face; A man causes a dancer to fall and sprain their ankle; Elise slaps David in the face; A man walks into a bathroom where David and Elise are talking and David hauls off and punches the man in the face; David pushes and knocks over a bunch of people as he is running Disclaimer: All reviews are based solely on the opinions of the reviewer. Most reviews are rated on how the reviewer enjoyed the film overall, not exclusively on content. However, if the content really affects the reviewer's opinion and experience of the film, it will definitely affect the reviewer's overall rating.