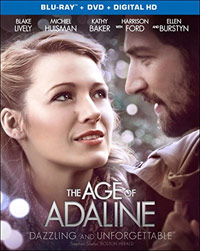 The Age of Adaline 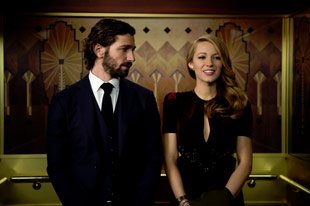 A young woman, born at the turn of the 20th century, is rendered ageless after an accident. After many solitary years, she meets a man who complicates the eternal life she has settled into. (from IMDB)

I must confess I'm a bit of a romantic. I'm a sucker for a good romantic story or romantic comedy, but I also hate romantic stories that aren't told very well (or put a main character through the ringer for the entire film). When I first saw a preview for The Age of Adaline, my interest was piqued--and not just because it stars one of my favorite actors, Harrison Ford. Movies like Serendipity, The Lakehouse, even Kate & Leopold are often viewed as mushy or sentimental, but there's something about the whimsical nature of these films, their direction, and/or their cast that I tend to have a real soft spot for. The Age of Adaline was directed by indie director Lee Toland Krieger who approached the film with great attention to detail and a truly impressive cinematic beauty. Krieger's execution of the story alone elevates the film to the next level. 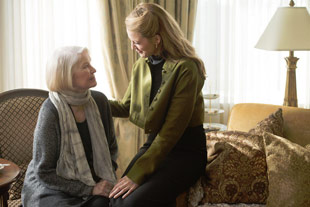 Blake Lively (Green Lantern, The Town) stars as Adaline Bowman, a young woman who has eternal youth due to a freak car accident and extreme conditions that occured during the incident that caused this unexplainable phenomenon. After a scare with the FBI trying to take her into custody to investigate her condition, she decides to go on the run, never staying in the same place for more than 10 years at a time. Through the years, her loved ones end up growing old or dying off, while Adaline continues to try to stay under the radar and go about her daily life in spite of her circumstances. Lively is wonderful as Adaline, giving the character an elegance and an "old soul" feeling to her personality as she's reluctant to attach herself to anyone, with the knowledge that she'll just out-live anybody she'd spend her life with. Then she meets Ellis Jones, played by Michiel Huisman, a charming philanthropist who becomes completely enthralled with Adaline and is desperate to be with her. Things only get more complicated when she eventually decides to give in to her feelings for him and Ellis takes Adaline to meet his parents.

Rob Simonsen's dreamy score adds to the mystery, tenderness and elegance of the film, while cinematographer David Lanzenberg really makes the film gorgeous to look at. While stories like this tend to have the male leads feel a little too one-dimensional or paperthin (more like a prop or plot device than a real person)--and, if I'm being honest, Ellis does teeter on the edge of that a little bit--I thought Huisman did a good job, and was a worthy enough foil for Adaline's resolve to stay single and alone. Harrison Ford, who doesn't seem to get that many worthwhile roles anymore (which clearly changes this December), is actually fantastic as William. He seems to channel all the right emotions for his character and play up the desperation just right. I think he brought a lot to the role and the film and was simply perfect. 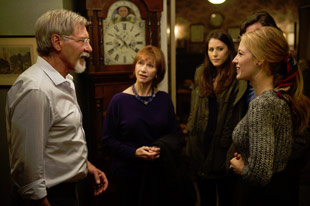 The content is mostly mild for this kind of film (and compared to the director's previous works), but don't let the MPAA rating of "for a suggestive comment" fool you. There's a little language (mostly 1 "S" word in the opening scene and some uses of "Oh my G-d" and 1 "g*dd*mn"), as well as some violence from two car accident scenes. In both scenes, we see some blood on a person's head, but it's not graphic. There's also a flashback scene of a person scraping their hand on a tree branch, resulting in a lot of blood on both of their hands and then we see a brief close-up shot of a needle going through their skin to sew up the wound (and then some stitches on the wound). Also, some brief passionate kissing leads to two characters waking up in bed together the next morning, and apparently the "suggestive comment" is when Ellis's sister asks Adaline if she'd "done him yet," to which she sarcastically responds, "Yes, 10 minutes ago... right where you're sitting." For the most part though, the film is relatively tame, although it still isn't quite totally family friendly.

The Age of Adaline is a beautifully shot and presented romantic drama that takes viewers through ten decades of American history, giving us a love story for the ages. Some viewers won't like the narrator aspects that pop up at the beginning and end, and some story elements are a tad predictable (yet forgivably so), but The Age of Adaline is a cut above many other romantic efforts in recent years, and offers a bit of a classic cinematic feel in the process. Romance fans will especially enjoy this one.


The Blu-Ray release of The Age of Adaline gives viewers a bonus DVD and a digital Ultraviolet copy along with the high definition transfer. It's an absolutely beautifully shot and colorful film and the HD Blu-Ray transfer is truly impressive. Along with the feature film and a director audio commentary track are the following extras: 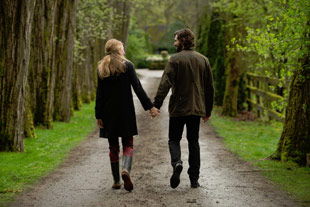 A Love Story for the Ages (29:38) - Director Lee Toland Krieger and cast and crew talk about the making of the film and how it came to be. Krieger talks about having filmed a "mood reel" beforehand to show as an example of what the film would look like with colors and locations, etc (and we're shown some of that footage here). They also talk about the film's set design, making Vancouver into San Francisco and keeping it as authentic as possible, filming for the different time periods, etc. It's a great look at how the film came together and was made. The segment wraps up with cast and crew reflecting on the idea of living forever and how it wouldn't be as great as some might think.

Style Throughout The Ages (18:19) - This featurette focuses on the clothing of the different decades and what that means for the character of Adaline. We also see concept art and photography for Adaline/Blake through the various time periods.

Discovering Young Harrison Ford: Anthony Ingruber, A YouTube Sensation (8:19) - I was impressed by the young guy they found to represent a young Harrison Ford in the movie. The crew reveal here that they actually found Australian actor Anthony Ingruber on YouTube and hired him immediately. Ingruber talks about being a huge Harrison Ford fan and having worked on his impression of him extensively. Harrison approved of their choice in Anthony and even calls him a "miracle" find.

Deleted Scenes (4:30) - There are about two deleted sequences lumped together here. The first shows police officers invading Adaline's apartment in search for an apparent gas leak. Adaline awkwardly keeps one occupied while others investigate in the kitchen. During this, the cop spots a photo of her from the 30s or 40s and her mulitple ID cards and cash just laying out on the table. She tries to distract him and they eventually discover the gas leak is not in this apartment and they leave. The second scene has Adaline getting a phone call at work about her elderly daughter, Flemming, so she goes to visit her. She then tries to get Flemming to talk about what the problem is, and she expresses that she had a "senior moment" and panicked about having briefly forgotten where she was for a second. Both scenes aren't necessary--and the first one seems a little hokey with her having left important papers and such out in the open for just anyone to find (and for someone on the run, that seems overly careless)--but it's cool to have them as a bonus on the disc here.

Sex/Nudity: Ellis stops elevator doors from closing with his hand so he can meet Adaline, and jokes about sticking his hand where it doesn't belong. Adaline jokes back that it won't happen again (or something like that, insinuating he won't get anywhere with her); We see a brief flashback of Adaline sitting with a pair of soldiers and laughing and she tells one to get their hand off of her (but she's laughing too); Ellis and Adaline pick up his sister, Kikki, and she climbs into the backseat of their car. Kikki makes a remark about Adaline being his latest fling and she says to her, "Have you done him yet?" Adaline then sarcastically replies, "Yes. 10 minutes ago, right where you're sitting."; Ellis and Adaline passionately kiss and we then see them wake up together in bed the next morning. He's without a shirt and she has the covers pulled up to her shoulders; At Ellis' parents' house, the couple shares a room together. A scene starts as we see Adaline pull a nightgown strap up over her shoulder (finishing putting it on). Ellis is sitting on the bed and marvels at how pretty she is. She then climbs in bed and they briefly talk before the scene ends; We see a flashback of a young couple making out by a lake (and it's implied by how "close" they were that they slept together at some point)

Alcohol/Drugs: People have drinks throughout the film; Adaline and Ellis have wine together; William drinks wine; Adaline is seen walking outside and drinking wine; People have wine and champagne in a scene where William gives a toast.

Blood/Gore: We see blood on Adaline's head while she's in the water after an accident; In a flashback, Adaline cuts her hand on a tree branch and we see some blood on the branch. We then see her with blood all over both hands and then a close-up of a needle and thread going through the wound, sewing it closed. There's then another shot of the hand with stitches through it; A person who's been in a car accident and thrown from the car has some blood on their face.

Violence: We see photos from the aftermath of the real San Francisco earthquake from the early 1900's; We see a car slide on a snowy road and the passenger jostle around inside the car as it flips and lands in the water. Lightning then hits the car while it's in the water; We see a second car accident where a truck t-bones a car, sending it upside down over the side of the road. Paramedics revive the victim. Disclaimer: All reviews are based solely on the opinions of the reviewer. Most reviews are rated on how the reviewer enjoyed the film overall, not exclusively on content. However, if the content really affects the reviewer's opinion and experience of the film, it will definitely affect the reviewer's overall rating.