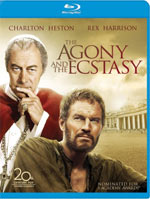 The Agony and the Ecstasy

Now, for the first time, the acclaimed epic starring Oscar® Winners Charlton Heston and Rex Harrison is available on Blu-ray! Despite the grueling physical demands involved, renowned Renaissance artist Michelangelo (Heston) spends more than four years creating the Sistine Chapel's spectacular ceiling fresco. All the while, he questions his own religious views and battles with the man who commissioned him, Pope Julius II (Harrison). (from 20th Century Fox Studio Classics) 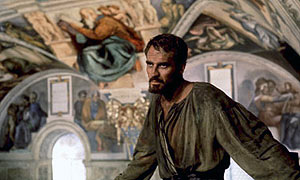 Anyone who's spent any time studying history, especially art history, is familiar with the works of Michelangelo. He was an accomplished sculptor who is most known for his statue of David, but most impressively, painting the ceiling of the Sistine Chapel in Italy. The 1965 film The Agony and the Ecstasy put acclaimed actor Charlton Heston in the role of the sculptor who was reluctantly commissioned by Pope Julius II to paint the ceiling. Rex Harrison starred opposite Heston as the Pope in this historical drama.

Heston was no stranger to historical films. In 1956, he played Moses in The Ten Commandments, and in 1959, Heston played the leading role in Ben-Hur. It seemed no stretch to have Heston play Michelangelo, and he proved up to the challenge for what would end up being a pretty physically demanding role. Pope Julius II is ruthless and far from what one would expect a church leader to be. He was tyrannical in his rule of the church and one who was feared for his power to sentence anyone who opposed him to death. Michelangelo had no choice but to accept the Pope's commission to paint the Sistine ceiling, something he never wanted to do from the beginning, as he considered himself a sculptor first and foremost. Rex Harrison (who I'd recently seen in the 1947 classic The Ghost and Mrs. Muir via NetFlix) plays the Pope with a strength and charisma that helps you to hate him but want to like him at the same time. It works well for the story, and Heston and Harrison's scenes together are some of the best moments in The Agony and the Ecstasy.

The Sistine Chapel artwork is truly breathtaking, and the story told in The Agony and the Ecstasy really bring some added depth and humanity to a project that seems nearly impossible to have been created by the human hand. The same could probably be said for the architecture and sculptures of the time period as well, but the Sistine paintings are quite exquisite. The Agony and the Ecstasy sets out to not only highlight Michelangelo's painting but also his legacy outside of the story of the film. One of the strangest aspects of the movie is that it opens in modern day times in the mid 60s as a sort of documentary to highlight the various sculptures that Michelangelo created throughout his lifetime. A narrator gushes about the various works of the scupltor and, oddly enough, this makes up the first 12 and a half minutes of the film. Once it concludes, the actual film starts and we're introduced to Michelangelo's day via a battlefield in Italy. While the intro is educational and it brings to the forefront the true passion of Michelangelo's artistic pursuits, it just feels like a poor storytelling device. The other, albeit minor, problem the film has is in its pacing. While the story is overall interesting and engaging -- thanks mostly due to solid acting and a fantastic depiction of the process of painting the ceiling -- the two-plus-hour running time does feel a little long at times. The painting of the Chapel makes up most of the film, with only a little bit of the character of Michelangelo being focused on in between.

The film has an interesting juxtaposition of spirituality within the church. The movie portrays Michelangelo as being very flawed and worldly, but still having a sincere reverence for God that inspires him to paint the designs on the ceiling. Arguably one of the best scenes in the film involves the Pope marveling at Michelangelo's work as it challenges his own personal view of who God is and who man is in relation to it. [According to the film] Michelangelo sought to show how man was created in God's likeness and sought to paint it as gracefully as possible, and this beauty sends the Pope's mind reeling. It brings some forth great food for thought, too, with the harshness and cruelty of the way the Pope rules pitted against the love and grace Michelangelo sees in his God.

The movie's content is relatively tame, but it'd be a hard PG or a light PG-13 today. We see quite of bit of Renaissance style male and female nudity in all of Michelangelo's work -- from the statues to paintings, but it's never done in a sensual manner. One scene even has Cardinals who visit the Sistine crying blasphemy over Michelangelo painting the nude imagery on the church ceiling. Another theme has a married woman expressing her affections for Michelangelo (and she even kisses him), but he admits to having once loved her and now being too engrossed in his art to even think about love. And another scene, when the Pope's men go looking for Michelangelo, shows them bursting into a brothel on a woman with just a bed sheet around her as they interrogate her. She laughs off the idea of Michelangelo being there (but she says he hasn't been there "in years," hinting that he previously had visited her) and we see a man hiding behind a door who had been there with her. Finally, there are some brief battle scenes that show blood on some miscellaneous characters' hands and bandages, but nothing detailed or graphic (it literally looks just painted on).

The Agony and the Ecstasy makes its blu-ray, high definition debut here and it's given a really impressive and colorful transfer. I can't say it's quite as good as, say, the Ben-Hur transfer, but it's still quite vibrant. If you are a fan or are planning on watching it at some point, definitely pick up the blu-ray release.

The Agony and the Ecstasy is a good, but not perfect, historical drama that tells a great story about one of history's greatest artists. The spiritual aspects of the story present some great topics for discussion and illustrate how corrupt the church was back in the days of Michelangelo. Fans of Heston, Harrison, old films, and art would especially enjoy this one.

Sex/Nudity: Through the entire intro, we see various statues that Michelangelo sculpted that show male and female nudity. We see the leaf over a man's crotch on one statue, the genitals of a baby, a couple bare-breasted female statues, some more male genitals and then the famous nude David statue; While soldiers are searching for Michelangelo, they enter a brothel of sorts where we see a woman in bed with just a sheet across her chest (there's some cleavage and it's pretty obvious she's naked in bed). They ask where Michelangelo is and she laughs at them saying he hasn't visited in years and he'd never be in a place like this. One soldier decides to stay as the other leave until he finds a man hiding behind the door there and he then leaves; We see lots of male and female nudity in the Sistine Chapel artwork; A married woman briefly kisses Michelangelo, but he tells her he only used to love her. As they're talking, he talks about a previous relationship with another woman and making love to her; Cardinals visit the Chapel to see the artwork and complain vehemently about the nudity; When Michelangelo is sick, Contessina de'Medici starts to remove his clothes when she says she needs to clean him (and we see her removing his shirt).

Violence: We see a battle in the opening scene of the movie that involves swords and rifles firing in tall grass. We briefly see some victims falling; In frustration, Michelangelo scrapes the ceiling and destroys his own painting. He then throws a can of red paint at it and rips up his drawings; We see the battle front with more explosions and gunfire; When Michelangelo can't see from paint dripping into his eyes, he starts to fall down the scaffolding and lands on the floor below; The Pope cracks his staff over Michelangelo's back when he refuses to go back to work; We see dead soldiers littering a battlefield; We see the Pope's been wounded in war and has a makeshift brace on his torso; We see cannons firing. Disclaimer: All reviews are based solely on the opinions of the reviewer. Most reviews are rated on how the reviewer enjoyed the film overall, not exclusively on content. However, if the content really affects the reviewer's opinion and experience of the film, it will definitely affect the reviewer's overall rating.