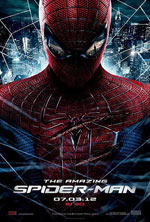 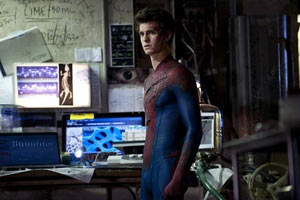 Peter Parker finds a clue that might help him understand why his parents disappeared when he was young. His path puts him on a collision course with Dr. Curt Connors, his father's former partner. (from IMDB.com)

It seems a little odd to see a beloved series like Spider-Man get a reboot just ten years after its big screen debut. It's been five years since fans were appalled by the atrocities inherent in Spider-Man 3 (Oh, y'know...Goth Guy-liner Parker, Dancing Parker, Topher-faced Venom, and too many villains), but the announcement that Spidey was getting a new face, new director and new direction was made even sooner, and was met with quite a bit of opposition.

From its inception, The Amazing Spider-Man has had strike after strike against it with naysayers speaking doom and gloom over it every step of the way. Indie director Marc Webb (500 Days of Summer) takes the reins here and has been given the tall order of taking a familiar story and attempting to make it something fresh and new. The end result will undoubtedly garner mixed reactions as to whether Webb has succeeded or failed, but after having seen all four Spidey films to date, it's tempting to say that Webb's may be the best yet. 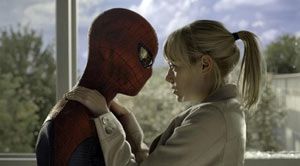 This isn't to say that Sam Raimi's films didn't have merit; they definitely did. Spider-Man 2 was indeed a triumph at the time of its release in 2004. Raimi's had his own unique style that gave New York a comic book look and feel for the most part, yet still managed to give the stories some grounding (with the exception of Spider-Man 3 which just went for spectacle over substance). But thanks to the success of the grittier Dark Knight, Webb gives The Amazing Spider-Man a less cartoony, more realistic look to it. This is only supported by loading up his film with a cast of excellent actors. Andrew Garfield, who is already only about thirteen months away from turning 30, is excellent as a teenager struggling to find an identity who battles with feelings of being alone as he approaches becoming the web slinging masked hero. As much as I liked Tobey Maguire as Spidey, Garfield already is proving to have more range and sincerity as an actor. Emma Stone is also a superior choice for not only Gwen Stacy but also as Peter's main love interest. Stone is a strong actress who is certainly more enjoyable to watch than Kirsten Dunst, so her teaming with Garfield is inspired. Also, Webb shies away from Raimi's go-to plot device of having Mary Jane play a damsel in distress. It was bad enough that she was one in the first two movies, but by the third one, it was just plain ridiculous. So while the basic familiarity of the Uncle Ben story and radioactive spider bite origin all exist here, Webb does his best to ensure the audience that this isn't as much as a remake as it is a starting over. Amazing Spider-Man even introduces moviegoers to Parker's parents for the very first time, creating a mystery as to the cause of their disappearance.

To set Garfield's Spidey apart even more from Maguire's, Webb has this Spider-Man's web shooters be entirely synthetic and external, as opposed to Maguire's organic versions. Not a lot of time is spent explaining how these work, but it's an interesting take on Spidey that we haven't seen on the big screen before. Parker's "Spidey Sense" also seems to be focused on more this time around. It's been awhile since I've seen the originals (although I do have recollection of moments where a bewildered Maguired dodged some attacks), but the way it was handled here was pretty neat. The effects in the film were also mostly spectacular, with the usual mix of practical and digital being utilized throughout. The Lizard was pretty wonderfully done as Rhys Ifans played an excellent Dr. Connors and a menacing monster as well. He's a versatile actor and he brought a lot to the role. And, for those who care, the film is considerably more spider-centric. From the opening credits featuring the titular creepy-crawly to the radioactive spiders being hundreds (and dropping down in bunches onto Parker), this take on the superhero isn't afraid to frequently focus on the widely vilified insect. 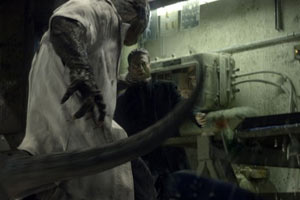 The content for the film was about on par with most superhero films, including the Spider-Man series. There was a bit more sensuality in this one as opposed to the others (including a scene where Peter seems to be ready to take his relationship with Gwen to more physical heights, but she stops it from going beyond some passionate kissing), but it's really the violence and intense visuals that raise the warning flag for some audiences. Parker gets banged up pretty good during his fights, so it's rare when we don't see a bruise or scrape on Peter's face or body. After an encounter with The Lizard, we see Peter shirtless with large bloody gashes across his chest. Another sequence sees a character being impaled by The Lizard's claws, which isn't too graphic as it happens, but the aftermath is bloodier. Also, Uncle Ben's inevitable demise is rather bloody, as we see a close-up of his blood-soaked shirt and some blood on Peter's hands. Finally, we briefly see a mutated mouse holding and eating the remains of another mouse, which proves to be the most gruesome moment in the film. Connors' transformation into The Lizard is a bit creepy at times. When his arm regenerates and he peels chunks of lizard skin back to reveal a white, mucousy new human arm, it may be unsettling to some viewers. Most of the language used in the movie is minor, but Parker does speak incomplete uses of "mother--" twice, with the second being something like "mother hubbard." Some readers will think it's ridiculous to even mention, but if any younger, impressionable kids see the movie, it's not likely parents will want their kids running around spouting pseudo profanity since the film's hero did (Just a parental heads-up there).

When all is said and done, Marc Webb's debut outing for a big budget blockbuster, and an official reboot for the Spider-Man franchise, is a success. Webb balances the story and action wonderfully, and the skilled performances of those involved help keep the story moving forward when it's relying entirely on building up the plot, characters and story, before we get to Parker finally donning his iconic red and blue suit. If Webb can continue hitting homers with future installments of this revitalized franchise, the second go-around for Spidey may be much better than the first.

Sex/Nudity: Parker finds two teenagers passionately making out next to his locker, which blocks his access to his locker. The girl turns the guy around and pushes him up against the locker as they continue to make out; Peter is in a subway and puts his hand on a woman's shirt to calm her. A guy tells him to remove his hand but he says he's trying to. Finally, someone shoves Parker and he falls backward, ripping the woman's shirt off completely, revealing her in a pink bra with busty cleavage. We see her like this for the rest of the scene; Peter and Gwen passionately kiss; Gwen tends to some wounds on Peter's bare chest and the two start to neck a bit. Peter starts to escalate their kissing when Gwen stops him and shares some reservations with him about their relationship.

Blood/Gore: Peter has a bruise on his jaw after being punched; Ben has lots of blood on his clothed stomach after being shot. Peter puts his hands over the wound and we see blood all over his hands then and later on; A thug has a bloody nose; Peter has a spider bite welt on the back of his neck; Peter looks up spider bites online and we see varying degrees of "wounds" caused by spider bites; Peter has some scrapes and bruises on his face; When Connors transforms, we see his missing arm has fully regenerated, but is covered in lizard scales. He then proceeds to tear the scaling off his hand, pushing his fingers through the outer skin. It's mucousy and gross, and likely to disturb some viewers; As Connors fights Spider-Man, he slashes his chest and we see a little bit of blood through the tears. Later, we see Peter shirtless with bloody gashes across his chest as Gwen cleans them. His face is scraped and bruised too; Peter sees a mouse tank with broken glass in the corner of it and some blood along the edges. He hears chewing sounds and peers over an edge to see a lizard-like mutated mouse eating the bloody remains of another mouse. It's pretty graphic; A character is shot in the leg and we briefly see a little bit of blood in the dark light, but we then see a bloody hand print on something they touch soon after; A man is impaled by The Lizard's claws and left for dead. We see the man laying on the ground with blood on his clothes; The Lizard is gunned down and we see various bloody wounds through the torn lab coat on his back. We then see a close-up of some of them scaling over quickly; While Spidey fights Lizard, his tail comes off, leaving Spider-Man holding it in his hands. He tosses it aside as Lizard's tail quickly regenerates.

Violence: Flash bullies a kid by holding him upsidedown over his plate of food. He tells Peter to take a picture, but Peter refuses and Flash punches Peter a few times; A man robs a store and runs away. Ben bumps into him and the man falls over. They fight over his gun and it goes off, killing Ben; Peter slam-dunks a ball into a basketball hoop, accidentally shattering the glass backboard; Not knowing his own new super-strength, Peter accidentally rips the faucet handle off and later breaks the glass front door; Spidey runs down several crooks and leaves them trapped for the police to find (beating up several in the process); Spidey dodges a cop's bullets fired at him; Not in the mood for anything Flash could say to him, Peter slams Flash against a locker and lifts him off his feet; A bridged is gridlocked with traffic as The Lizard ravages the cars in search of someone. Several cars are thrown off the bridge, which Spidey catches and suspends by a web. He then has to retrieve a child from one of them before it burns up and drops into the water; The Lizard and Spidey fight in the sewer; Spidey and The Lizard fight in a school, with both of them flying through walls and creating a lot of damage; We see a mutant mouse eating the remains of another mouse; A gas is spread that begins turning some police officers into reptiles like The Lizard; Spidey uses liquid nitrogen in an attempt to subdue Lizard. A character then shoots off some of Lizard's appendages, but they grow back; We see the top of Oscorp tower break off, spreading debris onto the streets below; And other comic book action violence. Disclaimer: All reviews are based solely on the opinions of the reviewer. Most reviews are rated on how the reviewer enjoyed the film overall, not exclusively on content. However, if the content really affects the reviewer's opinion and experience of the film, it will definitely affect the reviewer's overall rating.