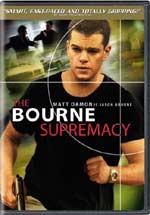 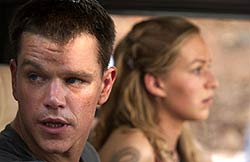 The Bourne Supremacy re-enters the shadowy world of expert assassin Jason Bourne (Matt Damon), who continues to find himself plagued by splintered nightmares from his former life. The stakes are now even higher for the agent as he coolly maneuvers through the dangerous waters of international espionage - replete with CIA plots, turncoat agents and ever-shifting covert alliances - all the while hoping to find the truth behind his haunted memories and answers to his own fragmented past.

The Bourne Identity was a surprise hit in 2002 when the popular Robert Ludlum novel was brought to life on the big screen. More known as a pretty boy than an action star, Matt Damon was selected for the title role in the gritty action film. While some scoffed at the thought of Damon as the lead, he had the perfect persona for the role and made the amnesia-stricken Jason Bourne a real and believable character. It's two years later, and The Bourne Supremacy is the latest adaptation in Ludlum's series. Apparently loosely based on the book, Supremacy also takes place two years after the events in the first film where we find Bourne and Marie in hiding in India. When a hitman shows up and tries to take out Bourne, it sets him back on the run, back in pursuit of finding out who is after him and why. Corruption and deception once again follow...

After watching Bourne Identity again before seeing Supremacy, I found the overall feel of the movie to be considerably different. This can be expected of course, as Doug Liman didn't return this time around to direct the sequel. In that sense, I felt Paul Greengrass's approach to the Bourne series was less effective than Liman's. His camera motions were considerably more jerky than Liman's and the editing a lot more choppy. While some audience members have complained the film's direction made them somewhat queasy while watching it, others like myself, found it to produce an overall confusing atmosphere. While that is the case for Jason Bourne and his world as he struggles to remember who he is, it makes for a more dizzying viewing experience than anything. 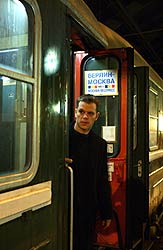 If you haven't seen The Bourne Identity, there's no sense in seeing Supremacy. The sequel jumps right into Bourne's life now without any kind of recap or anything. This is perfectly fine for people familiar with the story, but others will be completely lost and won't be able to understand or appreciate anything in Supremacy. What Identity had going for it that Supremacy is missing is more of the inner turmoil of Bourne's character unfolding. Here, he's still visibly struggling with who he is and why the CIA won't leave him alone, but he also spends most of the movie without much interaction with other people. And when he does, it's usually of the interrogation kind.

Violence and language are still the film's major content downsides. The first film offered a little too much by way of profanity and blasphemy while the violence would sometimes border on brutality. In Supremacy, everything is still present but toned-down considerably. There are some very violent sequences but Greengrass opts to keep much of it out of view of the camera (or the jerky editing makes a lot of it hard to follow). There are still a handful of profanities, but much less than before. Bourne spits out an "f" word while interrogating someone, but the rest of the language is much less frequent than in Identity. The film is still more aimed at the adult crowd and there's nothing about it that's suitable for younger audiences (nor would they be able to sit through much of the slower story-building moments). Violence also includes a suicide scene where we see a man drinking alcohol before abruptly shooting himself (the sound effects aid in making it a more disturbing sequence).

All in all, The Bourne Supremacy is a good sequel, improving slightly on content issues the first suffered from, but isn't nearly as strong a story or as strongly directed as its predecessor. A film not for the whole family or a young audience, this is one that is still too intense for some people. Parents will definitely want to take the violence and language into consideration before seeing this film. - John DiBiase (reviewed: 7/24/04)

Sex/Nudity: We see Marie and Jason in bed asleep together but nothing sexual happens (they live together, but aren't married). We see various women wearing bikini's on a beach; Marie's is somewhat see-through

Alcohol/Drugs: A man has a drink before committing suicide; Bourne steals a bottle of alcohol and takes a drink before spitting it in a man's face. Later, he douses a wound with it.

Blood/Gore: We see blood floating in the water after a person is killed. We see a photo of a dead man with a small bullet hole in his forehead and some blood running from it. During and after a brutal fight, Jason has some blood on his lip while the other man has blood on his face and hands. A man shoots himself in the head and although we don't see anything, we hear the shot and a splatter sound as they quickly cut away from the act. In a flashback we see repeated in pieces, Bourne shoots a man and a woman but due to the fast-cuts of the scene, we don't really see anything. Bourne is shot in the shoulder and we later see some blood on his hand after he touches it. We see the wound very briefly as he splashes alcohol on it. After an accident, we see a man hunched over his steering wheel with a great deal of blood on his head (with pieces of glass resting on top). Bourne has some bloody scrapes on his neck and face.

Violence: A lot of action violence including people shot dead by an assassin (we don't see anything graphic), a person is shot to death and we see their dead body under the water, a man kills another man by shooting him, Bourne strangles a man to death and blows up their home, some hand-to-hand combat, people shot, violent car chases and crashes, etc. Disclaimer: All reviews are based solely on the opinions of the reviewer. Most reviews are rated on how the reviewer enjoyed the film overall, not exclusively on content. However, if the content really affects the reviewer's opinion and experience of the film, it will definitely affect the reviewer's overall rating.