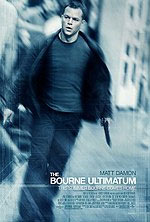 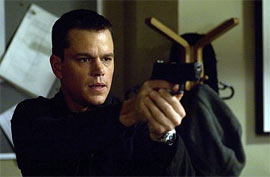 When those responsible for who enlisted Jason Bourne discover he's still alive, Bourne is on the run again as he continues the search for those who started it all. But can Bourne find the truth before those who have the answers are eliminated?

The Bourne Ultimatum is the third movie installment from the Jason Bourne series of books originally penned by Robert Ludlum. In the first film, we meet Bourne, a man who was pulled out of the ocean with a few bullet holes in his back and no recollection of who he is or why he's there. Before long, Bourne learns he's an assassin of multiple identities and it seems everyone wants him dead... but he doesn't know why. Although action films, the Bourne series maintain a sense of realism in their gritty presentation. Bourne's an ordinary guy who's programmed to be a killing machine yet all he wants in life now is a fresh start. Since beginning his run from a series of assassins like him and corrupt government officials who want his existence erased, he's only been shot at, shot up, beat up, and had love taken from him. And now all he wants is for it all to stop.

When we last see Jason in the first sequel, 2004's The Bourne Supremacy, he's in New York City, talking to CIA agent Pamela Landy on a cell phone. It leaves the movie with a sort of resolution, but The Bourne Ultimatum picks up shortly after the action of Supremacy ended. Surprisingly, the scene from New York in Supremacy becomes part of the plot wedged somewhere past the middle of Ultimatum. The continuity of the three films together work quite well as a whole, with even moments of Ultimatum flashing back to scenes from both of the previous movies. Watching one after another, you get the sense that it's one continuous story, and Ultimatum just might represent the end of it all. 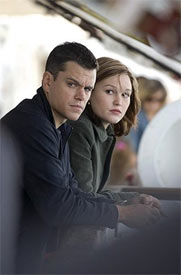 Director Doug Liman helmed the first film, The Bourne Identity, while Paul Greengrass has followed it up with the two succeeding sequels. Greengrass utilized a shaky camera feel in Supremacy that quickly became distracting and dizzying, hurting the film to a degree (after all, it's not The Bourne Witch Project). For The Bourne Ultimatum, Greengrass seems to have ignored the mass's complaints and has unfortunately used this again, making some of the more action-heavy scenes difficult to follow who's throwing what punch and so on. But while Greengrass may be stubborn to make a needed change like that, he does have an idea of what works for these movies and he inserts plenty of what was great about Identity and Supremacy into Ultimatum, without it feeling tired, stale, or over-used. The action is stepped up a bit the third time around, however, and Bourne is frequently running (or driving) in an exciting chase sequence, or pummelling a baddie who is threatening him -- or someone trying to help. One of the film's best sequences involves an assassin chasing the character of Nikki (who Julia Stiles has played in all three films), with Bourne in hot pursuit over rooftops, while being chased himself by local police. Greengrass knows how to create great tension, and the hand-to-hand fights that break out following tense moments like these are vicious payoffs. One instance where Bourne beats the snot out of a guy with a cookbook and then a towel, will have people thinking of him as a sort of American Jackie Chan. And somehow, Matt Damon as Bourne is completely believable -- and his intensity through the portrayal is what makes it work.

While the frequent flashbacks and recap references make following The Bourne Ultimatum much easier if you've never seen the previous films or have forgotten them, revisiting the first two flicks before watching the latest gives the viewer a heightened appreciation for the story. It's a treat to have Jason discover who he is, although not everything from his training is explained or revealed. There also is a deeper connection between Bourne and another character that's hinted at and touched upon, but never really explained, while the final moments leave the story open ended just enough to warrant a third sequel should the studio call for it. However, The Bourne Ultimatum is a satisfying close should they (hopefully) let it conclude here.

Content is as edgy as the previous films. Although language doesn't include an "f" word for the first of the three films, there are still a few "s" words, and a good deal of blasphemy. It's enough to make you wonder how necessary it really is to include. Aside from language, violence is heavy due to all of the hand-to-hand combat, with one instance ending with a character being strangled to death, and several scenes involving shooting and the like. While this might be the least bloody of the three films as well, Bourne still takes his fair share of beatings through the fights, and the action is fairly constant throughout the movie's duration.

Sex/Nudity: We see Bourne and Marie passionately kissing in flashbacks from both previous films.

Alcohol/Drugs: Bourne injects a syringe into himself with some sort of medicine or painkiller

Blood/Gore: We briefly see a bullet wound on Jason through his clothes as he's cleaning it and injecting himself with a painkiller in front of a mirror. He has blood on his hands, the door, and a sink; A man shot by an assassin has blood on the ground around their head; After fighting with a man extensively, both Jason and the man have flood on their faces and hands. We later see dried blood on Bourne's hands; After an explosion, Jason has some blood behind his ear; After a car crash, Jason has some blood on his face; After a car crash, a man is seen slumped over in his seat with his head on the steering wheel and blood all over his head and face (but he appears to be alive); In a flashback, Jason shoots a man who has a hood on his head. We then see a little bit of blood on the man's face

Violence: A lot of action violence including people shot dead by an assassin (we don't see anything graphic), a man kills another man by shooting him, Bourne strangles a man to death; some hand-to-hand combat, people shot, violent car chases and crashes, etc. Disclaimer: All reviews are based solely on the opinions of the reviewer. Most reviews are rated on how the reviewer enjoyed the film overall, not exclusively on content. However, if the content really affects the reviewer's opinion and experience of the film, it will definitely affect the reviewer's overall rating.