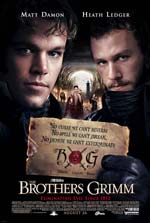 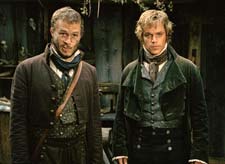 Directed by Terry Gilliam and starring Matt Damon, Heath Ledger, Monica Bellucci and a host of notable cast, the movie is about the Grimm Brothers' adventures and is woven with the fantastical tales that they are famous for - Little Red Riding Hood, Hansel & Gretal, Sleeping Beauty...
(from Miramax.com/TheBrothersGrimm)

Fans of the cult British comedy team Monty Python would know right off the bat who Terry Gilliam is. Probably best known for his role as the coconut-clunking sidekick Patsy in the 1975 film Monty Python and the Holy Grail, Gilliam has gone on to direct a handful of movies, with his most recent being The Brothers Grimm. This tale is an especially creative one, taking a fictional look at the lives of Willhelm and Jacob Grimm, the famous fairy tale authors. The film follows the brothers as fake witch and monster hunters who are thrown into what is soon revealed as a real life fairy tale.

The film's mixture of silly humor and fantasy/horror elements feels like a hybrid of The Mummy (1999) and Van Helsing (both Stephen Sommers-directed films), but may be even more light-hearted than both. In fact, silly may be the best word to describe much of The Brothers Grimm, and it's an acquired taste indeed. Knowing the mood of the film ahead of time helps prepare the viewer, but the unknowing is likely to be taken by surprise. The Brothers Grimm is a mixed bag at best. While the relationship between the brothers, wonderfully played by Matt Damon and Heath Ledger, starts out almost slapstick, Gilliam does well in fleshing out their close bond and how they react when a woman enters their lives. But the film is just as much a comedy as it is a fantasy, adventure, and a monster movie. And the film works well as each. The humor, although often more silly than witty, works to relieve the terror some sequences offer. For example, while a late night ride through the enchanted forest proves deadly for some characters, the film is quick to offer comic relief from the brothers or an Italian torture specialist who works for the French and masquerades as a German named Cavaldi (played by the always-a-pleasure Peter Stormare).

Heath Ledger steps into what is probably one of his most unique roles to date. Throwing away any of his tough guy image, Ledger plays Jacob Grimm as a bumbling, sensitive, and self-conscious character that is fantastic to watch and funny in and of itself, considering Ledger's usual roles (even in A Knight's Tale or The Four Feathers). Damon's character isn't quite as drastic a departure, but is still a great fit for him as Will is sort of a naive but more stable compliment to his brother. Besides the solid chemistry between Ledger and Damon, the real charm of The Brothers Grimm is its creativity. The story revolves around a group of missing children with many familiar characters from the Grimms stories worked into it. For example, Little Red Riding Hood is represented by a missing girl who wore a "little red riding cape," Hansel and Gretel (who are aware of the infamous tale of the gingerbread house) are referred to as Hans and Greta, while we even get introduced to The Gingerbread Man, the Big Bad Wolf, and a villain who serves as a compilation of fairy tale characters.

But for the folks thinking the equation "adventure + fantasy + children + fairy tales = family film," you'll have to be warned that The Brothers Grimm is hardly a film for the family. If anything, the violence in the movie is its biggest problem. In a couple tense sequences, the results are... well... rather grim. When the brothers and some French soldiers accompanying them are attacked in the enchanted forest, we see a man get pulled into a tree and one of its roots suddenly shoot from his mouth (killing him). A body also falls from a tree to reveal that from the waist down has been eaten and only bones remain. Jacob and Will walk into Angelika's cabin to ask her for her help and watch her graphically skin a dead rabbit. We see the whole act from in front of her and behind the rabbit (with it very much in the foreground), and we hear the gutting more than actually seeing it. Also, as a random act of humor, a small kitten is accidentally killed when hit by a spinning torture blade and we see some guts fly across the room (with a drop landing on Delatombe's face, which he then tastes). Finally, we see two decapitated heads pulled from barrels after those they belonged to had been executed (not seen). In addition to those moments, there are plenty of creepy and potentially frightening moments that include a horse swallowing a child alive (but doesn't kill it), and a blob of mud causing a child's face to literally wipe off. While the list of violence continues, it just doesn't seem necessary to have such content in this kind of story. It takes what could have been a fun family film and makes the audience more exclusively adult (if that).

Violence aside, the last thing to note is the film's visuals. The sets used in the film are breathtaking and work wonderfully to the advantage of the film. The special effects vary from somewhat cheesy, and too obviously CGI, to quite effectively realistic. The settings definitely help add to the believability of the story.

In the end, I have to admit I enjoyed The Brothers Grimm. The humor is an acquired taste, but I found it worked well for this kind of a film. The characters were strong, albeit over-the-top at times, and the story creative and interesting enough to be worth the watch. Due to the violence and potentially terrifying elements, the kids should definitely be left at home (which is a shame, because it is an otherwise fun adventure film).

Sex/Nudity: Will takes two girls upstairs at a tavern and we see them asleep in bed together in their pajamas; The queen's dress shows some cleavage at times; The queen tries to seduce Jake in her mirrored reflection as a beautiful woman (while in reality, she's just a mummified body across the room). She caresses him (nothing explicit) and asks him if he desires Angelika.

Alcohol/Drugs: Jacob gets drunk in a tavern and we see many other characters drinking there as well. People have wine at a fancy dinner. Delatombe drinks wine.

Blood/Gore: We see a scary-looking witch that looks like a decomposing corpse (that turns out to be fake); Jacob and Will walk into Angelika's cabin to ask her for her help and watch graphically skin a dead rabbit (and are grossed out by the sight). We see the whole act from in front of her and behind the rabbit (with it very much in the foreground), and we hear the gutting more than actually seeing it; Although neither bloody nor gory, we see a horse is fed spiders which drive him mad. It then emits a web that wraps around a child and we see the shadow of the animal as it pulls the child into its mouth and swallows it. We then see a shot of the horse running with an enlarged belly, and when it opens its mouth, we see the child's head (it's still alive) in the horse's throat; When the brothers and some French soldiers are attacked in the enchanted forest, we see the root from one of the trees pull a man into a tree, and a root suddenly shoot through his mouth from inside of his body (killing him); A body falls from a tree to reveal that from the waist down has been eaten and only bones and some possible flesh remain; Cavaldi has some blood on his head; A small kitten is accidentally killed when kicked by a startled Cavaldi into a spinning torture blade that reduces the kitten to meat, sending some guts flying, with a drop landing on Delatombe's face across the room, which he then tastes; A child fetches a pail of water, and in the process rescues a crow that had fallen into a well. It springs back to life and flings mud onto the child. When it stands to wipe off the mud, the child's facial features are wiped off as well and we see their blank face (they try to scream but it has no mouth). We then see an eyeball in the mud and a blob forms, taking the eyes as well as a nose and mouth for its own; We see a wolfman prick the finger of a person and draw some blood from it; Jake finds a corpse of the queen in the tower which appears mummified and wrinkled with really long finger nails (we see the corpse many times); We see two decapitated heads pulled from barrels after those they belonged to had been executed (not seen); Although not bloody, a character is hit with an axe that we see briefly sticking from their back; We also see a person impaled by a staff and hear the sounds of the impact, but there is no blood or anything graphic shown; A large knife is driven into a person's chest and we see the bloody stain on their shirt afterwards; We see what appears to be some sort of large tack pulled from one character's chest (with some blood seen on it) and driven into another's chest; Jake shatters the queen's mirror which causes her to crack and shatter much like the mirror, with shards of her falling off. Her hands are bloody from trying to pick up the pieces. We also see blood covering Will's hands from trying to pick up the shards; We see some blood on the end of the tack after its been pulled from a person's chest.

Violence: Some slapstick violence and much fantasy-related violence, including some hand-to-hand fighting (some resolving in death), etc. See "Blood/Gore" above. Disclaimer: All reviews are based solely on the opinions of the reviewer. Most reviews are rated on how the reviewer enjoyed the film overall, not exclusively on content. However, if the content really affects the reviewer's opinion and experience of the film, it will definitely affect the reviewer's overall rating.