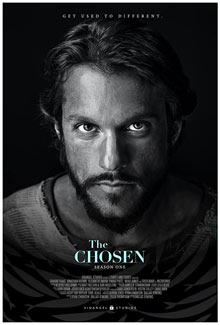 The Chosen (Season One)

A charismatic fisherman drowning in debt. A troubled woman wrestling with real demons. A young tax collector ostracized by society. A religious leader questioning his faith tradition. (from IMDb)

I watched a lot of religious movies in my younger days. My small, wonderful Baptist church had a movie night once a month for the Sunday evening service, and us kids were allowed to sit in the center aisle, surrounded by pews on either side, and munch away on popcorn made in the ancient church popcorn machine. And if we were careful, perhaps we would be served some of that awful church punch as well. And there, on a blanket my parents had gotten out of the back of the car, wed watch stories from the Bible brought to life on the flickering screen. Or perhaps, it would be the tale of early reformation fathers, like Calvin and Luther, brought to glorious life by some well-meaning denominational body that funded the films. Much of my early images and thoughts on Jesus and faith were formed on these Sunday nights, and even through the low production values (did they really have zippers in Bible times, or speak with British or southern accents?), I was moved by seeing my beloved Saviour interact with the world around Him in loving and surprising ways. And then, upper lip stained with punch and half asleep, I would stumble to the family car, visions of Middle-Eastern landscapes and Romans with rubber swords dancing in my head.

Over the years, as my movie-watching sophistication increased (what well-meaning religious film could possibly compete with E.T., The Goonies or Indiana Jones?), my embarrassment at attending these Sunday night film viewings increased, and the aspiring music and film critic in me found lots to make fun of when Jesus would be preaching, and a car would pass by in the scene behind him. (To be fair, this very thing happened in an early scene of The Lord Of The Rings: The Fellowship of the Ring too.) So it was with great trepidation that I approached the new television series The Chosen, filmmaker Dallas Jenkins' wildly ambitious attempt at telling the stories of the four Gospels. But a few intriguing trailers, and some great casting, piqued my interest, and due to a whole lot of home time with my family recently, I gave the series a shot as something to watch together.

Within the first half hour, I knew that Jenkins had captured something that many sincere filmmakers before him have missed: the inherent humanity and authenticity of the host of characters that populate the Gospels - the motley crew misfits and respectable people, fishermen and tax collectors, prostitutes and religious leaders, beggars and soldiers, that make up just the first few chapters of each Gospel. Much like The West Wing powerfully features the White House from the viewpoint of some of the lowest staffers there, and not just the President, The Chosen wisely tells the story of Jesus from the vantage point of those who were there to tell the story later on.

And that's the strength of the season-long format that television has to offer. Each episode can dig into a single character and imagine the whos and whats that brought him or her into the path of the messiah. With this creative formula, the stories of the demon-possessed Mary Magdalene, the headstrong and bankrupt Peter, the awkward and painfully lonely tax collector Matthew, the burnt-out-on-empty-religion Nicodemus, and the cynical and analytical merchant Thomas, are rendered wonderfully alive and in full color as the first followers of Jesus. (And a special shoutout goes to the way that John The Baptist is portrayed as a wiley, Yoda-type speaker of riddles and mysteries, camel hair clothing and bug-eating included.) In fact, Jesus, the central character of history doesnt show up in frame till the very end of the first few episodes. And the show is all the more powerful for showing the Son Of Gods effect on those early disciples, and not just telling, as so many past versions of Christian movies have. (Jesus is wonderfully played by actor Jonathan Roumie, with both a gravitas of character and a light touch, particularly in the humor department.)

Regarding content, The Chosen is true to its First Century setting in depicting the harshness of life in Israel under Roman occupation, but deftly walks the line in how it depicts such things. The first episode shows characters drinking in a bar-like establishment and has suggestions of what goes on in the Red Quarter where Mary Magdalene lives and works. Also, there is a depiction of demon possession (the affliction that Jesus healed Mary from in the Gospels) and some minor suggested violence on the part of the Roman guards overseeing taxation. But no content here is out of place with what the four Gospels describe. It is all deftly handled, and appropriate for ages 12+.

In many ways, The Chosen is definitely in its first season, and you can feel the writing, acting and production getting better in every episode of the initial run. You can see the seams a bit in the first two episodes (the actors and script writers havent hit their groove yet), but by the end of the wonderful third episode that takes a left turn and features just children and Jesus, you can tell that this isnt just another religious piece of propaganda; it's a true artistic labor of love and a wonderful balm for the soul in these troubled times. Heres to many more seasons of The Chosen, and heres to Jesus, who really did turn His followers' lives upsidedown in a forgotten corner of the world two thousand years ago. That The Chosen is a great series is also a minor miracle. (I think Jesus would have appreciated that joke in his days on earth.)

The Chosen can be streamed for free by downloading the VidAngel or The Chosen app (GooglePlay), and features a unique way to donate and pay it forward for others to watch.

Editor's Note: Christian Music fans may find it interesting to know that Jars of Clay frontman Dan Haseltine co-wrote the bulk of the show's music with Matthew S. Nelson.