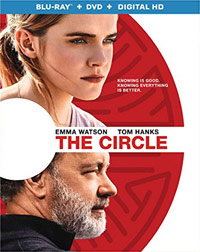 A woman lands a dream job at a powerful tech company called the Circle, only to uncover an agenda that will affect the lives of all of humanity. (from IMDB) 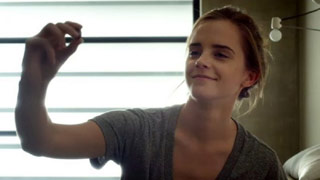 Technology has woven its way into every fiber of our daily lives, and with corporate tech giants like Google and Apple dominating our lifestyle, a film like The Circle isn't far-fetched to think of. The film--which is based on a book--takes a look at a Google/Apple-type company that dominates social media to the point where it starts to drive society, and introduces new technology that will place cameras in nearly every corner of our surroundings. It not only threatens our privacy, but it instills a sense of paranoia in our daily lives that can be just as destructive. Emma Watson plays a naive young woman named Mae who scores a job at this company, named The Circle, and quickly works her way up the chain to become a seemingly willing participant of a program that would have her entire life broadcast live to millions across the globe. The Circle uses this technology under the guise of extinguishing "lies" by way of revealing all "secrets." Honestly, it doesn't make a whole lot of sense, but it sets up what you'd expect to be a taut thriller that instead turns out to go nowhere.

With a cast that boasts the star power of Emma Watson, Tom Hanks, John Boyega, Patton Oswalt, Bill Paxton, Karen Gillan, and Glenne Headly, you really expect a lot. And you should. However, The Circle tends to feel like a baseball game where your team loads all the bases with runners, only for the inning to end with a strike out, stranding all of them. In that sense, The Circle feels like a wasted opportunity. The story is all about our privacy, social media, and how society is taking great strides to surrender our privacy to those around us in exchange for "likes" and "follows." Watson's Mae is about as gullible and, sadly, rather stupid as you can imagine. I understand her excitement for The Circle as a company, but when red flags abound all around her in regards to seriously questionable behavior, she merely responds with a bewildered look before virtually shrugging it off and going on about her business as if nothing's happened. I've seen enough films to know what a setup looks like--having a scene early on lead to something later on--but The Circle seems to do this over and over again without much of a payoff. This may seem "unpredictable" to some, which would usually be a good thing, but it more so makes the film read as poor storytelling than innovative or engaging.

I was actually really looking forward to seeing this one. The premise is all too relevant for today's society, and the cast is a solid one (I love watching Hanks especially, and I was eager to see Boyega in another role outside of Star Wars... not to mention this is Bill Paxton's final film before his unexpected death earlier this year). Watson is good enough to lead the film as Mae, but the character makes so many questionable choices that it makes it tough to get behind her. And when she finally ends up compromising her poor, ailing parents' privacy in one scene, it makes it even tougher to root for her. By the time she does inevitably stand up for herself, it feels like too little too late. Furthermore, the "villains" of the story don't really seem to be guilty of much more than being likable characters who want to dispense with privacy (but not give up their own). Hanks and Oswalt's characters are truly likable guys, and while that may lend to a more grounded world for the story to reside in, they don't really seem much like foes here either. But the characters those who buy in to The Circle's lifestyle are so "out there" in terms of being over-the-top in how they embrace their diminishing freedoms that that alone feels jarringly less realistic. Director James Ponsoldt seems to be trying to strike a balance between entertainment and reality and just can't quite seem to find that sweet spot.

While the cast is really good in their respective roles, one of them sticks out like a sore thumb from the rest of the bunch. Ellar Coltrane plays Mercer, a hometown friend to Mae who is far more rustic (he even makes art pieces out of deer antlers) and is against the lifestyle that Mae is signing up for. Her parents even like him and think she should pair up with him. Unfortunately, Ellar is painfully dull as Mercer, and even Mae seems bothered by the character when we first meet him. When she seems to care about their friendship in later scenes, it doesn't make much sense--nor is he charming or likable--and he ends up just making a struggling film more troubled. He's also supposed to represent the more skeptical minority of society who don't so easily buy into the lies of a company like The Circle. And given the attempted message of the film (I say "attempted," because it isn't presented very clearly), they don't paint too good a picture of those who are supposed to be the wiser here. 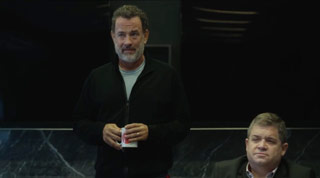 The content is pretty mild overall, with three significant scenes that make it more PG-13 in nature. There are 10 uses of the "S" word, and a handful of other profanities, but they are spread out throughout the film. However, there's one use of the "F" word by Hanks near the end of the film. Otherwise, there is one scene of violence where a truck accidentally drives off a bridge (with the driver presumably dying, but we don't see the impact). And there's a scene of sexuality where Mae is trying to find her parents in their home via video while she's broadcasting to the world, and we see her mom straddling her father in bed.

The Circle is one of those films that you watch and something tells you it could have been really good--all of the pieces are there--but it just doesn't come together. It's certainly not the worst film of the year, nor is it a complete waste, but it does struggle to find its footing and ultimately doesn't really get anywhere. Sadly, despite still being watchable, The Circle a rather forgettable film. If you're looking for a decent commentary on privacy and broadcasting a life on the air, I recommend watching The Truman Show instead.


The Circle is available on single-disc DVD or in a Blu-Ray/DVD combo pack with a bonus Digital HD copy. The Blu-Ray disc offers the film in crisp HD as well as with the following behind-the-scenes featurettes...

No More Secrets: Completing the Circle (30:56) - This half-hour featurette is available to watch in four parts or all in one shot. They talk here about how the film is based on a book by Dave Eggers, and how Tom Hanks was interested in making the film because of that. There are some great interviews with the cast here, behind the scenes footage of the various sets and filming in Los Angeles, the ethics of the subject matter, and more. Oddly enough, this featurette is poorly edited where the music from various example scenes shown conflicts with the narration and just feels haphazardly put together.

The Future Won't Wait: Design and Technology (10:55) is all about the company who designed the pop-up comments interface you see in the film, as well as the Title treatment and end titles in the film.

A True Original: Remembering Bill Paxton (13:53) - Honestly, the best part of this entire disc--even better than the film--is this retrospective on Bill Paxton. Bill died earlier this year due to complications during heart surgery, and this featurette features Tom Hanks recalling what it was like to meet and work with Bill on the set of Apollo 13 decades ago. He also reminisces about getting to know the man as an actor and friend, and how he was far more complex than people realized--even possessing a unique love for impressionist art. Tom's joy and enthusiasm for Paxton is infectious here, and it makes his loss feel all that much more tragic.

Sex/Nudity: While broadcasting online to her viewers, Mae accidentally tunes in to her parents who are about to have sex in bed. We see her mom straddling her naked dad while she's fiddling with some kind of pump device (it's unclear if it's a sexual device or related to his struggle with MS). She panics and shuts off the screen. We see some pop-up chat comments relating to the event, cheering on her parents; When Mae talks to her viewers about an art sculpture made out of handcuffs, one chat comment is shown asking "Is this a sex thing?"

Alcohol/Drugs: There's some drinking at a party. Mae finds Ty standing alone he gets a wine bottle out of a bush and shares it with Mae; We see some more people drinking at another party.

Blood/Gore: The final shot of the film pans out to show a bunch of monitors with various images. One of them, above the original image, is a human belly with a big red stitched-up scar on it.

Violence: We see some footage on a screen of fires burning during riots; Mae goes kayaking in the dark in the fog and when she has a near-collision with another boat, she falls out of the kayak into the water; Bailey encourages people to use The Circle's tech to find a person who is off the grid. The first person they find is a convicted felon and we see them being chased and apprehended. The second person is not a felon. When drones and some people find this person, they panic and jump into a pickup truck and speed off. They then drive recklessly and accidentally drive off a bridge. We don't see the impact, but we do hear that the driver died. Disclaimer: All reviews are based solely on the opinions of the reviewer. Most reviews are rated on how the reviewer enjoyed the film overall, not exclusively on content. However, if the content really affects the reviewer's opinion and experience of the film, it will definitely affect the reviewer's overall rating.