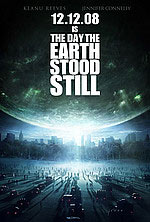 The Day The Earth Stood Still

- for for some sci-fi disaster images and violence. 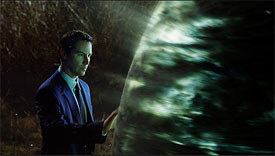 The Day the Earth Stood Still is 20th Century Fox's contemporary reinvention of its 1951 classic. Keanu Reeves portrays Klaatu, an alien whose arrival on our planet triggers a global upheaval. As governments and scientists race to unravel the mystery behind the visitor's appearance, a woman (Jennifer Connelly) and her young stepson get caught up in his mission - and come to understand the ramifications of his being a self-described "friend to the Earth." (from MovieWeb.com)

It's always a tricky, sensitive thing for Hollywood to remake classic films in modern day form. Seldom is a remake a complete improvement on the original. Even a celebrated director like Steven Spielberg failed to capture the wonder or quality of a movie like War Of The Worlds. Every remake from The Time Machine and Journey To The Center Of The Earth to Planet Of The Apes and King Kong just pale immensely in comparison to the original. Now, in 2008, Scott Derrickson (The Exorcism Of Emily Rose) sets out to direct an update of the 1951 sci-fi classic The Day The Earth Stood Still, starring Keanue Reeves and Jennifer Connelly. 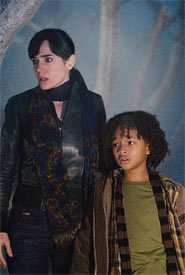 I admit it's been some time since I've seen the 1951 original, but it's a strong film that's a unique envisioning of a short story by Harry Bates, entitled "Farewell to the Master." The original film is a great departure from the story and the 2008 remake is even more so, taking more cues from the 1951 flick than anything. But Derrickson sets out to create a new spin, and it mostly works despite feeling all too political or environmental in its approach. In the '51 film, the central character, an alien named Klaatu, is depicted as somewhat of a Christ figure in his interactions with the human race. Surprisingly, Derrickson keeps this allegory mostly alive although through a different approach, even if it isn't handled as effectively.

The original The Day The Earth Stood Still was more drama than action, being made up of primarily dialog. The new film doesn't stray too far from this method of telling the story, and uses ambiguity and mystery to add suspense to the story. It doesn't take long for the actual story to kick in, either, but Derrickson sets up the human characters in the film to feel more real than in other alien invasion blockbusters like Independence Day or even the overly melodramatic War Of The Worlds remake. Still, in the 2008 Day The Earth..., Jennifer Connelly stars as Helen Benson, a widow taking care of her stepson Jacob who struggles with bitterness and denial over the loss of his father. There's tension between Helen and Jacob, but it never gets vile or abrasive like in Spielberg's War Of The Worlds. Will Smith's son Jaden stars as Jacob, and does the best he can with his inconsistent dialog, but without having his father with him - like in The Pursuit Of Happyness - Jaden isn't able to connect quite as well with anyone else on the screen and tends to seem too forced in his acting. Also, in the original film, Michael Rennie's Klaatu is considerably more personable and emotive, and even forms a bond with Helen's son. In the new film, Helen and Klaatu are given more of a connection, but Reeves plays the alien very stiff and mysterious. It works for the part and Reeves is convincing (perhaps because most of his roles are pretty stiff?), but having a previous familiarity with Rennie's Klaatu may hinder the accepting of Reeves'. 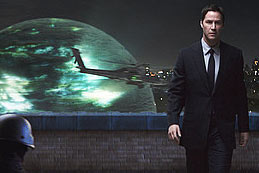 Derrickson keeps the content of The Day The Earth Stood Still mild when it comes to everything but violence (which actually also could have been much worse). Language is kept to 1 "h*ll" and about 3 uses of "G-d" (as in "Oh G-d!" or "Oh my G-d!"), while the only sexuality/nudity is a brief scene of Klaatu emerging from a sort of alien skin while on a medical table where we see his nude body from the side (it's all CGI effects and not very explicit). Aside from that, there's a fair amount of violence and sci-fi thrills that would make it too intense for younger audiences. When there is some destruction, we find that it's caused by minute parasitic metallic bugs that eat away at flesh and matter. We see them crawling out of the skin in one instance and some blood on a couple characters' faces when we learn they're inside of them. It's not too gory, but it's enough to get the idea of what is horrifically happening to the people. There is some other violence and blood present as well, so be sure to read over the content summaries after this review to get a good idea as to what you'll be exposed to.

By the time the abrupt ending signals the conclusion of The Day The Earth Stood Still, you're likely to feel a bit dissatisfied with its incomplete resolution, but Derrickson wraps it up just barely enough to work as a finish... it's just unfortunate it couldn't have felt more solid. The special effects are decent but not especially memorable, and the new version of GORT is cool, but he doesn't get quite the presence he's given in the 1951 film. There's one scene where his size and strength is delightfully intimidating, so it's a shame they had to deviate from the original approach to his character so much. Also, the lack of a space ship is greatly felt here. The large sphere -- while cool once we discover what the multiple spheres are for (not just the one in New York as Klaatu's vessel) -- just doesn't do the job and have the same effect that Klaatu actually having a physical ship did. But when all is said and done, The Day The Earth Stood Still is one of the better modern remakes. It won't be remembered in the way the original is, but it's a decent update and an entertaining one at that. If you plan on seeing it, your best bet is to lower your expectations and check it out. Fans of the original would do best to expect a much different movie, but the nods to the original are fun and appreciated.

Blood/Gore: In a flashback to 1928, we see a small burn on a man's hand after his encounter with an alien sphere; Klaatu is shot and we see blood splatter onto Helen's helmet; Later, we see a scalpel cut into the outer fleshy matter of Klaatu's body, and the doctor pulls out what looks like gelatin and likens it to whale blubber. He then removes the bullet (we just see a closeup of the bullet and tweezers which have a little blood on them). We then see chunks of the matter start to come off of Klaatu in a gooey form and the doctor removes the chunks and places them in a bucket (it's gross but foreign in its appearance so it doesn't seem so gory); We see a bloody cut on Klaatu's skin; Some blood from his previous wound seeps through Klaatu's shirt. We later see him expose the sewn up wound and rub some matter onto it that heals it right up; Little mechanical bugs get into the clothing of a man and we see it slowly eat away at his clothes. We then briefly see some blood on his face and coming from his nose; A cop is hit by a car and has some blood on his mouth; After a car accident, we see blood all over the driver's face; Two characters have blood coming from their nose from the parasitic bugs; We see the tiny bugs crawling out from the hands and wrists of a couple characters into the skin of another (and therefore see tiny red bite marks). We also see some tiny bloody marks on a person's face

Violence: An object is reported as hurtling towards the earth at a speed that should destroy much of Manhattan, but it turns out to be a space ship; Klaatu is shot by a soldier; While Klaatu is hooked up to a lie detector, he shocks the man who is questioning him and takes over his mind as to get the answers to the questions he has; Klaatu demobilizes a group of guards by sending a signal through their earpieces; We see a man steal a ticket at an airport and then when the victim struggles with him, the thief gets away and the victim falls to the growd (perhaps stabbed? It was difficult to tell); We see the wound on Klaatu from his gunshot; We see Jacob playing a violent fantasy video game; We learn that Jacob's father was killed in the Army; A cop tries to stop Klaatu and holds him and Helen at gunpoint, so Klaatu slams Helen's car into the cop, who crumples to the ground (and appears dead). Klaatu then resurrects the police officer, and he almost appears to sort of electricuted back to life; Two helicopters aim lasers at Klaatu who forces the signal back to the helicopters and they crash into each other; The military sends drone planes after GORT, who just blows them out of the sky; A drillbit is destroyed when trying to penetrate GORT and we see tiny mechanical bugs on it eating away at the metal. A man in the room with GORT (in a bio suit) is then attacked by these little bugs and presumably dies. A swarm of these bugs then forces its way into the control room, killing everyone, before bursting out of the facility and dissolving army soldiers and vehicles and everything else in its path. We later see a tractor trailer as its driving be dissolved by these bugs, and later Giants Stadium; The military tries to blow up a car with people inside, causing it to flip (and the driver appears dead); The swarm of bugs attacks some people and we see some of the bugs crawling out of their skin; (there may be some other violence not listed here) Disclaimer: All reviews are based solely on the opinions of the reviewer. Most reviews are rated on how the reviewer enjoyed the film overall, not exclusively on content. However, if the content really affects the reviewer's opinion and experience of the film, it will definitely affect the reviewer's overall rating.