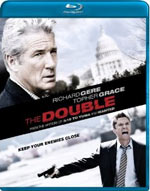 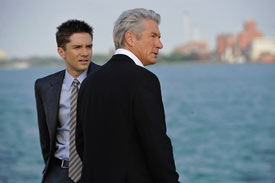 The mysterious murder of a US senator bearing the distinctive trademark of the legendary Soviet assassin Cassius, forces Paul Shepherdson (Richard Gere), a retired CIA operative, to team with rookie FBI agent, Ben Geary (Topher Grace), to solve the crime. (from MovieWeb.com)

It's usually not a very good sign when you see the trailer for a movie coming to theaters soon and then, without any recollection of it actually making it to any local theaters, is announced with a home entertainment release. The Double, a thriller helmed by first-time director Michael Brandt (whose previous credits include co-writing Wanted and the 3:10 To Yuma remake) is an ambitious spy film about a CIA agent being pulled out of retirement to find an infamous killer who has resurfaced. It's a film that plays on the dishonesty and mystery of the trade to keep the audience on their toes, but if you've seen the trailer for the movie, you're likely to feel like you've gotten a peak at the film's winning hand; thankfully, that's not entirely the case. 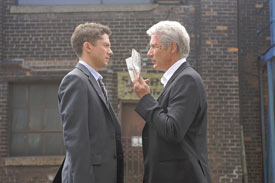 However, it's difficult to discuss the film without discussing what is given away in the film's trailer, so I'll approach this review assuming you at least have seen said trailer. So if you haven't, and intend on watching the film regardless of this review or having not seen the trailer, I recommend skipping this paragraph. As the trailer reveals (which is also revealed pretty early on in the movie), there's a great deal of mystery surrounding Richard Gere's character's role. The trailer eludes to the idea that Gere is the killer that Grace's character Ben is trying to track down. However, Gere's character is also a CIA agent (hence the whole "double" theme). But, to the film's credit, there's more than meets the eye to this spy story. Not everything is as it would seem, and some interesting little twists happen throughout the story. Still, it may have been even more fun to go into the movie having no idea Gere's character was even thought of as the villain. Writer/Director Michael Brandt may have not been the most ideal person to helm this project. Perhaps he's too close to the material to make wise judgment calls on how certain scenes or events would play out, but you can't help but question if the twists make any logical sense. It's a complicated and convoluted plot, but in the hands of more skilled filmmakers, it may have ended up having a stronger end result. Upon watching Brandt explain one of the real-life inspirations for one of the film's twists in the Blu-Ray's lone bonus feature, it does add some weight to the concept, but still it tends to feel as though its execution may be lacking. To make it feel even lazier, there are several flashbacks in the story to the late 1980s where we see Gere and Sheen when they were supposed to be younger, but absolutely no attempt was made to make the guys seem or look any younger than they are today; they didn't even try to darken their hair for these scenes. It just feels amateurish and lazy. 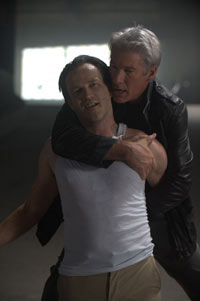 But this may all also have a lot to do with the film's players. Maybe going into the film knowing it's shaping up to be a "decent" B-movie colored my view of what I was watching, but I can't help but feel as though similarly lower budget B-movie films have been done considerably better. An example of a just-above average film like this would probably have to be 2003's The Recruit, which had a similar rookie-and-mentor CIA relationship with the excellent Al Pacino taking Colin Farrell under his wing. Somehow, 'Topher Grace and Richard Gere' doesn't sound quite as promising, even though both have had some good roles over the years. However, miscasting may be one of the biggest problems with The Double. Gere is pretty good as Paul Shepherdson, but that doesn't stop a few moments from feeling a little phoned-in. Meanwhile, Grace doesn't really have the look or probably even the acting chops to pull off the young CIA agent Ben Geary. While he's not nearly as lifeless as someone like Ryan Phillipe (like in the FBI drama, Breach), it's tough to take him seriously when the role calls for it. He was a bit cartoony in Spider-Man 3, but played up the pompous, young ladder-climbing business man perfectly in In Good Company. It's possible that The Double would have been a stronger film with a better-chosen actor for Ben. But the problems don't really end there. While John Debney is an excellent and accomplished composer, his score often feels misplaced--albeit cool at times--in this kind of film. It tends to lean more towards hip and electronic when a more theatrical approach may have strengthened the scenes. Lastly, the script wasn't as strong as it probably needed to be and Brandt's inexperience as a director may have made it more difficult for him to get more convincing performances out of his actors. And it's unfortunate, too, because there is a capable enough cast that's been assembled here. Veteran actor Martin Sheen isn't given much to do, while Odette Yustman does her best with what little she's given as well to play Ben's wife Natalie. And with me being a late follower of TV's diamond-in-the-rough mystery show Castle, I was thoroughly disappointed in the amount of screentime Stana Katic was given. While Stana is what keeps Castle's blood flowing, she is merely set dressing here in a shamefully brief scene where she's interrogated by Gere as they scream in Russian at each other. Her presence is absolutely wasted in the film.

The content is also pretty hard for a PG-13. All of the murders had to do with throats being sliced by a wire and so we see lots and lots of photos from these murders with victims' throats sliced and bloody (some briefly seen photos look remarkably gory too). To make matters worse, we see more than one of these murders as they are happening with the cuts on their neck forming and blood spilling from the wound. As if the act wasn't violent enough, it's pretty rough to see when it gets graphic. There's also plenty of language, including blasphemy, and Gere even mumbles the film's lone "F" word before the movie's final minutes. The violence definitely pushes the PG-13 limits, so those especially sensitive to bloody violence will definitely want to proceed with caution here.

With there being lots to nitpick about The Double, it's still hardly the worst you'll see in the genre and even all year. If you're looking for an excellent example in spy genre filmmaking, The Double isn't it, but as pure entertainment, I have seen worse. The story is entertaining and the plot intricacies keep things interesting enough, but its subpar presentation keep it from being more than average. And with the content being rather rough (language and graphic violence), there just isn't much about The Double worth recommending.


The Double is available on a single disc Blu-Ray or single disc DVD (no combo packs), and the usual digital services. While the movie isn't one of the better spy thrillers, something has to be said for the quality of this Blu-Ray transfer. It's top quality and one of the nicer transfers I've seen lately. Sadly, the film just doesn't live up to that visual quality. Along with the feature film, there's a feature-length audio commentary from the director, as well as one other bonus feature...

Producer Interviews (7:49) - Topher Grace, Richard Gere, Stephen Moyer and Michael Brandt, among others, talk about the plot and inspirations for The Double. It's a bit short and feels like it could have been more in-depth, but the fact these were included was a nice treat. However, it feels really unnecessary for a couple minutes of footage directly from the film to be included here mixed in with the interviews, especially when this whole featurette--the only one on the Blu-Ray disc--lasts less than eight minutes.

Sex/Nudity: A criminal calls a CIA agent's mom a whore to antagonize him. He then calls him a "son of a whore;" Paul asks a Russian woman to see Amber and she responds "Don't do it. She'll make it fall off," to which Ben asks Paul, "Amber's a prostitute?"; Paul catches Amber trying to flee her trailer and she is in her bra and leggings.

Alcohol/Drugs: Paul brings wine to Ben's house for dinner and they both have vodka martinis; There appears to be some alcohol and maybe drugs laying around in Amber's trailer

Blood/Gore: We see some blood on the ground around a dead body; We see close up photos of the aforementioned murder victim's throat with a bloody slice across it shown on a large screen. We see extended views and several angles of it behind someone during a meeting about the murder. It's pretty detailed; We see this bloody collage of images again on a computer screen; A criminal has a deep ugly scar on his cheek; We see a man just after his throat has been sliced with a wire and the wound bleeds as he screams before falling over dead; We see blood pooling on the ground after another man's thoat has been sliced; We see some blood on the side of a dead man's head in a photograph; We see a lot of blood across a dead man's throat who is lying on the ground; We see many close up photos of different bloody throat-cuts over several murders from many years; A man has some blood on his head after a car accident. Another man has some abrasions on the side of his face; We see a bloody bullet hole in a man's pant leg with blood running down it; We see a blood trail on the ground; A man is shot and has lots of blood on his shirt and head. We then see lots of blood on a man's throat as he's being strangled with a wire and bleeding to death.