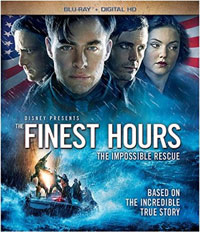 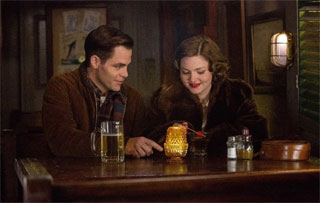 This heroic action-thriller is based on the extraordinary true story of the greatest small-boat rescue in Coast Guard history. In 1952, a massive winter storm strikes off the coast of Cape Cod, ripping a T-2 oil tanker in half and trapping more than 30 sailors inside its rapidly sinking stern. When word of the disaster reaches the U.S. Coast Guard, four men led by Captain Bernie Webber (Chris Pine) set out in a 12-seat boat on a daring mission to rescue the stranded men, braving freezing cold, 60-foot waves and hurricane-force winds, and guided by Webber's vow that "We all live, or we all die." Packed with thrilling, larger-than-life action and anchored in a belief in the strength of the human spirit, The Finest Hours is a triumph. (from Disney) 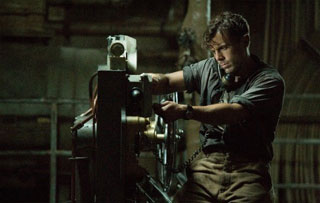 They say truth is stranger than fiction, and in the case of a daring Coast Guard rescue in Massachusetts in 1952, this saying couldn't be more accurate. During one of the worst snow storms that town has ever seen, Captain Bernie Webber manned a small, 12-seat boat to try to find a missing oil tanker that had been split in half by the storm. The stern half of the ship stayed afloat for a short time during the storm, but it was long enough for Webber's crew to make it to them in time. The Finest Hours is an emotional, thrilling tale of this rescue that proves to be inspiring and entertaining at the same time.

Chris Pine, who rose to fame quickly with his portrayal of Captain Kirk in the big screen Star Trek reboot in 2009, steps into the real-life role of U.S. Coast Guard member Bernie Webber. Bernie is one of Pine's most down-to-earth, humble and even timid roles. Pine plays him convincingly, too, which just shows the range this actor has. Casey Affleck--Ben's younger brother who has carved out an impressive career for himself in recent years--is Ray Sybert, the leader of the tanker's survivors. An impressive and able cast surrounds these two leads, including Eric Bana as Webber's superior and Ben Foster as his shipmate, Richie. Holliday Grainger plays his wife-to-be, Miriam, adding a little romantic subplot (and added drama with him having to risk his life), and she does a nice job fitting into the 50's time period.

One thing I really liked about The Finest Hours is how it also felt a lot like an old, classic movie. The film opens with an introduction of Bernie and his friend Gus as they go to meet Miriam for the first time in person in a diner. Then, as their relationship blossoms, we're quickly taken to that fateful time when the incredible winter storm hits, splittling the Pendelton tanker in two and forcing the brave men in the U.S. Cosat Guard to make the tough decision of braving the life-threatening storm in an attempt to rescue any possible survivors. The odds are stacked against both parties, and the story is an especially tense one if you don't know the outcome.

While the movie may be a little slow-going at first for some viewers, once Webber and his team head out on the rough waters while the tanker crew is trying to figure out how to slow the sinking of their ship, the action and stakes are amped up and more severe. This does incorporate some moments that may require the viewer to suspend their disbelief, as the crew is tossed around inside the ship or Webber's boat is pummeled time and again by wave after wave. I'm sure a little liberty was taken for the sake of theatrical entertainment, but it does help add to the tension of the reenactment of the story. 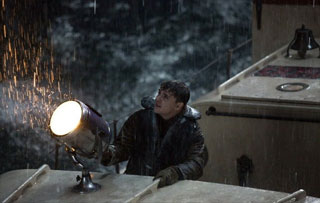 The content of the film isn't too bad for a PG-13 film. There is a little language, including a couple uses of blasphemy--which was totally unnecessary--while the violence is seldom graphic. Frank "Pops" Fauteux breaks his arm in one scene after being tossed inside the ship into a metal railing, and we later briefly see his forearm is red with a bulge (suggesting a fracture). Another sequence, which is sadly based on true events, shows a person trying to jump to safety, but falling into the water and hitting their head. We then see them sinking under the water. Other than that, it's mostly just the tension and perilous action in the film that gives it its rating. There is a hint of a faith element in the story, but mostly displayed when the tanker crew is seen praying together in the midst of their troubles. The special features on the Blu-Ray disc reveal that Webber was the son of a Baptist minister and had "felt the hand of God on his shoulder" during the trek out into the storm. While that is a bit downplayed in the actual film, the theme of courage, hope and sacrifice is evident and inspiring.

The Finest Hours is a great action drama that illustrates an incredible and true daring rescue from the brave individuals of the U.S. Coast Guard. It may be a little intense for the whole family, but it's still inspiring and a wonderful piece of film. It's one I definitely intend to revisit in the near future.


The Finest Hours arrives on Blu-Ray in a single disc release with a Digital HD code, on single disc DVD, and through the usual digital providers. It's a little surprising that the combo pack for the Blu-Ray didn't include a DVD, but with a digital copy and Blu-Ray disc, I suppose it's not a huge loss. The picture is crisp and clear and looks vibrant in high definition. The special features include the following:

Deleted Scenes (4:28) - There are two deleted scenes. The first is the longest one and it features the crew of the tanker on deck (with a blue screen behind them) as they examine the fracture in their hull and try to cover it up, unsuccessfully, with a tarp. The second scene features Richie telling Webber's crew the story of how Bernie met Miriam via the phone.

Against All Odds: The Bernie Webber Story (14:10) - This is the one, true special feature on the disc. It tells Bernie's story from the perspective of family and people who knew him. We hear about his town and how he grew up, and what he was like before and after the rescue. We also learn about his spiritual upbringing and how that came into play. Sadly, we find out that the survivors struggled with the loss of their friend and had a hard time considering their rescue a complete success.

Brotherhood (1:49) - The last four featurettes are mini promo pieces for the film. This one is about the cast. It features the cast talking about working with each other.

Two Crews (2:02) - This one is in the same vein. It's more centered on the two different crews on each ship.

What is Your Finest Hour? (1:02) is a brief real-life story from an actual member of the U.S. Coast Guard.

Blood/Gore: We see a bloody mark on a soldier's forehead; After Pops is slammed into a metal railing, we see a red bulge on his forearm from where he broke it; There's a hint of blood in the water after a man hits his head and sinks under the water;

Violence: We see the tanker being tossed around on the rough waters and it throws around the crew inside. It splits the tanker in two; Ray cuts the ropes holding a lifeboat with an ax, so it falls into the sea. We then see the waters crush the boat up against the side of the tanker; Another huge wave hits the tanker and the sailors get knocked around inside again. A beam hits Frank in the face; Miriam's car slides into a snow bank; Webber's boat gets toassed by the waves and slammed with waves many times. It throws the crew around the boat and even smashes out the windshield; A man jumps for a rescue boat and hits his head. We then see him sinking to his death. Disclaimer: All reviews are based solely on the opinions of the reviewer. Most reviews are rated on how the reviewer enjoyed the film overall, not exclusively on content. However, if the content really affects the reviewer's opinion and experience of the film, it will definitely affect the reviewer's overall rating.