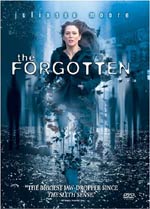 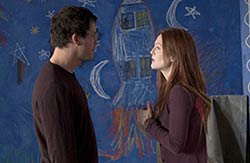 A single mother, Telly Paretta (Moore), whose 8-year-old son has recently disappeared during an airplane crash (and whom she fears might be dead), seeks the help of a psychiatrist to cope with the pain of her grief, only to be told that her son is merely a figment of her imagination, with her mind making up eight years of false memories. When she meets a father (West) who has had another similar experience with his own disappearing daughter recently, the two team up to try to find the answers... (from MovieWeb.com)

I was never much for the X-Files so when I heard the new thriller The Forgotten was similar to something one would see on that TV show, it made me curious. With one of the more engaging (and quite revealing) trailers you'll probably see this late Summer, early Fall season, The Forgotten seemed to hold quite a bit of promise. The end result? An above average, edge-of-your-seat thriller.

Julianne Moore, who is probably most recognizable for her role in 1997's Jurassic Park: The Lost World, stars as the lead in The Forgotten. The film opens with her character Telly still struggling with the loss of her son, Sam, in a plane crash over a year earlier. From there, the film's plot takes bizarre turn after bizarre turn as people around her start to tell her she's never even had a son. She then seeks help from the father of a friend of her son's as she tries to figure out what's going on. It's hard to describe the film without giving away too much and the movie has surprises aplenty. 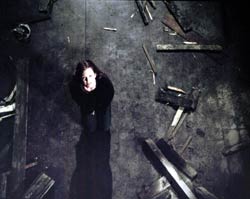 The performances in The Forgotten are more than adequate. Moore offers up an emotionally-charged performance while Dominic West, playing Ash, serves up a great character as an unorthodox former hockey player. There's some surprisingly funny moments tossed in throughout the film that help ease the tension and suspense. West brings most, if not all, of these moments. Everyone else in the film doesn't really have much screentime to really make much of an impact.

What you might expect from this film, you're probably not entirely going to get. Those going in to see a psychological thriller will get one in-part, but will most likely be disappointed in the film's conclusion and revelations. In fact, my main complaint with The Forgotten is its conclusion. The story for most of the film is engaging and interesting while the end is only somewhat satisfying.

Language is pretty much the only major objectionable content. Most of the first half of the film is virtually language-free but the latter half sees 1 mouthed "f" word and 1 spoken as well as a few other profanities. Blood/gore is limited to some slight blood on someone's head and a body that receives bullet wounds that quickly heal (isn't especially graphic, but somewhat gross). There is some other random violence, but none that is lethal. Sexual content is limited to just a therapist asking Telly about her sex life (which she then just dodges the question).

I must admit, I did enjoy The Forgotten. It is a flawed thriller but interesting enough to be a fun and entertaining trip to the cinema. The film's only real drawback (besides a so-so ending) was some language. And for that, and some violence, I can't openly recommend the film. Please read the below content details before deciding to go. - John DiBiase (reviewed: 9/25/04)

Sex/Nudity: Telly's therapist ask her how her sex life is, and she responds by asking him how he'd feel if she asked him about his (but neither ever answer the question). Telly meets Ash drunk in a park at night and he asks her to come home with him (probably for sexual reasons) and she declines. We see Telly briefly in her underwear as she's getting ready for bed (it's in a dark room, not much detail is seen). We see Telly and Ash in bed together later in the film, but nothing happens sexually as they just use the same bed to sleep in.

Alcohol/Drugs: Ash is seen drunk many times as he's probably an alcoholic (but that is never officially addressed). Telly encourages him not to drink but he continues regardless most of the time.

Blood/Gore: A man hits another in the back of the head with the blunte side of a poker. We then see the man who was struck tied up with a little bit of blood on his head, behind his ear. We see a person who is shot several times, but the bullet holes heal up after each shot. We see an infant just born in a flashback with some blood on it.

Violence: A man gets into a fight with some federal agents. A man stands in the path of a car and the car hits him, throwing him back (no graphic results). A man is struck in the head by a poker stick (but isn't wounded badly). We see a car accident but everyone appears to be okay. We then see that man tied up and interrogated by two people who hit him, slap him, and threaten to harm him (but don't). We see a person who is shot several times, but the bullet holes heal up after each shot. Two people struggle and fall out a window. A person holds another person by the throat and throws them down to the floor. Disclaimer: All reviews are based solely on the opinions of the reviewer. Most reviews are rated on how the reviewer enjoyed the film overall, not exclusively on content. However, if the content really affects the reviewer's opinion and experience of the film, it will definitely affect the reviewer's overall rating.