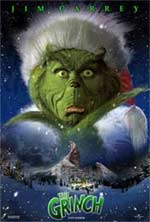 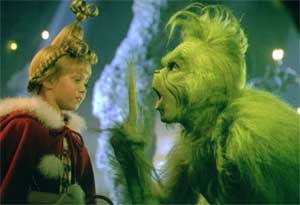 Based on the famous Dr. Seuss story, this film is a live-action version of the tale where an outcast creature of a small town called Whoville (home of the Who's) tries to steal away the holiday which keeps the town alive-- Christmas. Belittled and rejected since childhood, the Grinch had learned to hate Christmas through the joy the Who's expressed through the season while simultaneously rejecting him. It becomes the personal goal of Cindy Lou Who to try to show the Grinch what Christmas is all about and change his heart around for the good.

This is a tough movie to review. Jim Carrey is probably my favorite actor and the Grinch story has been a classic since before my birth. To see the two joined in such an amazing way was incredible and intriguing... but did Carrey do the part justice? Or should I ask if director Ron Howard did? Howard and Carrey take the classic "Scrooge" and transform the cartoon character into a walking, breathing, talking, living creation! Carrey dons the green, furry costume and assumes the role. He's spectacular in the part-- I cannot picture anyone else in the role to accomplish it physically. The only problem I found was Carrey was too... Carrey in the Grinch role. Someone may think that's all he can do anyhow, but he proved the skeptics wrong with 1998's The Truman Show. As Truman, he proved he could do serious roles and truly act. Although I didn't see it (due to its rating), I heard last year's Man on the Moon solidified the versatility of his acting abilities as well. 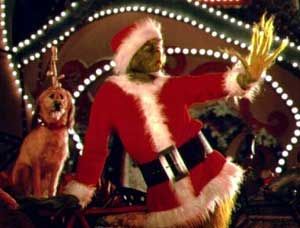 Some viewers and Grinch fans will easily see Carrey's Grinch as too animated, too goofy, and too... Jim Carrey. Others will see him as perfect and find the new twist delightful. I, however, am still undecided. Carrey helped make the Grinch lovable and hateable at the same time. My only complaint with the content of the movie is during a celebration that the Grinch attends. It's tough to swallow him doing a Conga line, shaving someone's head in a Carrey-like manner, and running away from an exploding toy car in slow motion as if in an action film (that is completely out of place). On the other hand, the highlights in the film include the Grinch roaming his lair, dealing with Cindy Lou, and the entire finale. The sets are amazing (all by scratch), the supporting acting is sufficient, and Cindy Lou is just plain adorable!

Relatively clean with the occasional oddness (the Grinch sticking his dog's butt in the mayor's face while sleeping-- who puckers up for a kiss, thinking it was someone else, and the Grinch wanted to spite him). Language was rather clean and sexual material was kept to merely a sexy outfit on the "prettiest" Who in Whoville. The overall film, however, isn't totally suitable for everyone... The sheer appearance of the Grinch and some of his mannerisms may appear to scary for the younger ones. I suggest using wise discernment when deciding to take your little ones to the theater.

In summary, I thought the movie was a lot of fun. Despite my indecision, I still really enjoyed it and found it to be an acceptable film.

Sex/Nudity: The Grinch falls over at one point, and lands in one of the Who's cleavage. When baby baskets land on peoples' doorsteps in a flashback, one man finds one and yells back into his house, "Honey, this one looks a lot like... your boss!"

Violence: Not much. There is an explosion-- all done in humor, and the Grinch sets fire to a Christmas tree, as well as trashes some things. Disclaimer: All reviews are based solely on the opinions of the reviewer. Most reviews are rated on how the reviewer enjoyed the film overall, not exclusively on content. However, if the content really affects the reviewer's opinion and experience of the film, it will definitely affect the reviewer's overall rating.