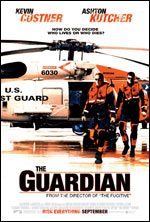 - for intense sequences of action/peril, brief strong language and some sensuality. 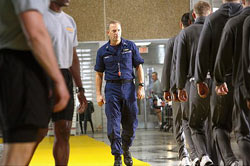 A famed Coast Guard Rescue swimmer (Kevin Costner) is re-assigned to teach at the legendary Coast Guard A School and inspires one cocky rookie (Ashton Kutcher) to learn the true meaning of heroism and sacrifice. (from MovieWeb.com)

When you think of great actors from our day, one name that won't ever come within miles of your thought process would probably be Kevin Costner. While Costner has turned in decent performances in films like Field Of Dreams (was that it?), he has earned a reputation for being an actor of the emotionless kind. Costner's latest film The Guardian stretches the actor a bit, pitting him with the surprisingly versatile Ashton Kutcher to tell the dramatic tales of the United States Coast Guard.

The Guardian is an engaging film about the U.S. Coast Guard in the same way that Ladder 49 was for firefighters. The story draws you in, giving you reason to care about the central characters so that when disaster inevitably strikes, you're too involved to not be affected. Costner steps into the shoes of a weather-worn and awarded veteran of the field who is forced to teach new recruits the ways of the job after he himself has a traumatic experience that renders him temporarily unfit for action. Costner ends up turning in a likeable performance as the troubled Ben Randall, who's so devoted to his work it ends up costing him his marriage. Kutcher's Jake Fischer is sort of your typical hot shot trainee with a secret drive that serves as a smart complexity to his character. The inner demons of both main characters helps create more of a dynamic, and the conflict ends up creating one of the film's most powerful moments when the two finally level with each other. But it's the characterization that gives The Guardian its strength.

One problem the film does have, however, is it spends most of its time with training exercises and the students struggling to survive all of the grueling tests. While it still ultimately works for the story, the actual screentime for the characters venturing out into the real life situations in the sea feels brief at best, with the most action bookending the film at its start and end. On the other hand, the trials the recruits go through give this particular occupation more appreciation, and it's an eye-opener for anyone who knows little to nothing about the U.S. Coast Guard. 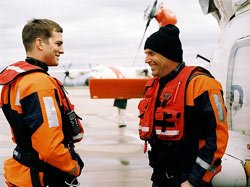 But probably The Guardian's biggest problem is its contrived and ultimately disposable love subplot between Fischer and Emily (played by Melissa Sagemiller). Fischer meets Emily at a wedding reception when dared by his colleagues, and the two end up on a date another evening before spending the night together at her place. They attempt to justify their relationship as merely casual, and their story, which is mostly intended to be cute and add more for the female audience to relate to, just feels empty and trivial. While it has a resolution with a touch of merit, their story didn't really fit into the big picture and only detracted.

Including the sensuality of their romance (sex is implied a few times although it isn't shown), the objectionable content for The Guardian is mostly language, with the worst being a single, frivolous "f" word uttered by Costner. While the language wasn't constant, it's still an issue here, and therefore could have been toned down further. Violence includes a few views of a victim with a burned face as well as perilous situations that will be tense for younger viewers. The film is primarily adult-oriented and is in no way geared towards anyone younger than the teen years.

Overall, I thought The Guardian was a fine drama and homage to an underappreciated profession. While a little more plausibility would have done the love story some good, the drama on the high seas is this film's strongest points. The effects are good and the action topnotch. Kevin Costner and Ashton Kutcher actually make a great team. It could very well be that Costner has a comeback on his hands with The Guardian, and I'd be interested to see where he could go from here.

Sex/Nudity: After a bet that Fischer couldn't get Emily to leave a bar with him, he approaches her, but she's wise to the scheme. For a cut of the winnings, she leaves with him but nothing else happens; We briefly see the guys from the chest-up in a hot shower after being in cold water for an extended period of time; Fischer jokingly tells Amy to stop undressing him with her eyes and that she won't get him in bed and we later see him shirtless in her bed the next morning while she's getting ready for work (they slept together); We see Emily in a robe while Fischer lies in her bed; Fischer and Emily joke about sex on a first date and the two then fool around under the covers (we don't see anything) and he jokes about teaching her the breast stroke; While in a cell, Jake grabs Hodges in a similar way that a victim might panic and grab a Coast Guard official trying to save them in the water (to help him learn to handle the situation). The cell guard returns to see this innocent situation and jokes about giving them more time alone together

Alcohol/Drugs: Some people drink at a wedding reception; We see Ben drink several times on different occasions; Jake and Emily have drinks in a bar; we learn a group of high school kids who had been drinking were killed in a car accident; Jake and Hodges go to a Navy bar and drink too much before picking a fight with Navy officers; Ben and Jake return to the same bar for some beers; Ben and Jake share some drinks later on

Blood/Gore: Ben and his rescue team find a group of dead bodies in the water; After an accident, we see a man's face is scarred from burns (we see it again later in a flashback); Ben has some bloody scrapes on his face after an accident; Jake and Hodges have scrapes and bruises on their face after a scuffle in a Navy bar; Hodges elbows Skinner in the nose, causing a good deal of blood to run out. We then see Skinner smile with blood on his mouth and teeth; A man has blood on his face after hitting their head on a log in the water; We see another unconscious person with blood on their face

Violence: We see stock footage of some ships sinking in storms; A man who's panicking while drowning pulls his wife under. A man hits him to calm him down; A ship sinks, leaving survivors who end up freezing to death; A helicopter crashes in the ocean killing most of the crew. A rescue basket containing a survivor of a wreckage is pulled underwater when the helicopter sinks; Some Navy men pick a fight in a bar; Hodges elbows Skinner in the face during part of a drill; A floating log hits a person in the face, knocking them out; A crew on a sinking ship is tossed around. We then see a man knocked unconscious and another get trapped; A man sacrifices himself to save another Disclaimer: All reviews are based solely on the opinions of the reviewer. Most reviews are rated on how the reviewer enjoyed the film overall, not exclusively on content. However, if the content really affects the reviewer's opinion and experience of the film, it will definitely affect the reviewer's overall rating.