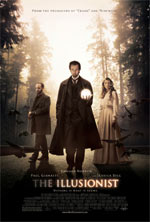 - for some sexuality and violence. 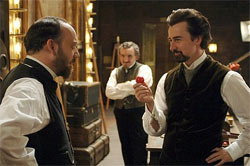 The Illusionist is the story of a magician in turn-of-the-century Vienna who falls in love with a woman who becomes engaged to a prince. He then uses his powers to win her back and undermine the stability of the royal house of Vienna. (from MovieWeb.com)

Every now and then, an indie film rises from amongst the bigger budget, wider-released movies to become a true sleeper hit. The latest to understandably get such attention is The Illusionist, a drama by first time director Neil Burger. Edward Norton stars in the lead as Eisenheim, a self-made magician who makes a name for himself by creating groundbreaking feats before the eyes of the villagers in Vienna. Norton steps away from his usual brand of roles to give one of his best and most intense performances to date.

Offering tricks and illusions that truly boggle the minds of anyone who sees them, he immediately begins to attract the attention of Crown Prince Leopold (viciously played by Rufus Sewell) and his hired cop, Chief Inspector Uhl (played by the always wonderful Paul Giamatti). Things only get trickier when his long lost childhood love turns up as a stage participant from the audience and, more unfortunately, as the Crown Prince's soon-to-be fiance'. What unfolds is a smooth drama with just as many tricks and slight-of-hand for the theater audience as the audience of the great Eisenheim.

What makes The Illusionist a winner in its theatrics is the combination of the powerful performances from Norton, Sewell, and Giamatti, coupled with gorgeous cinematography and a unique story. Director Neil Burger knows how to use camera angles and ambiguity to the story's benefit. I was very surprised this is Burger's first hand at a feature film. While the pacing could be slightly slow at times, the story keeps it all moving forward. Norton plays Eisenheim stiff but intense; quiet, but mysterious. While some may claim Eisenheim was a bit wooden, Norton plays him with near brilliance and is near unrecognizable as himself. Jessical Biel fills the shoes as Eisenheim's love interest Sophie, turning in a fine albeit mostly forgettable performance. 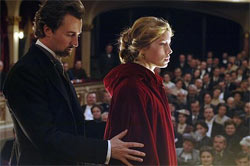 Content for the movie is quite mild, considering. The most intense of the content, however, includes the closeup of neck wound caused by a sword, as well a brief shot of a dead body with blood on its head after committing suicide. Other than that, there's a brief montage scene of a sexual encounter where we see closeup shots of skin being caressed, but nothing particularly explicit. It's unnecessary but thankfully over about as quick as it starts.

Some viewers may be a bit concerned by the thematic material involving magic, and it's an understandable concern. Eisenheim's gifts aren't really explained, and although many accuse him of carrying demonic powers, the film ultimately points to otherwise. Some of the illusions are also a bit creepy (not to mention the aforementioned murder scene), so younger viewers will want to pass on this more adult-oriented film.

I was overall quite impressed with what The Illusionist had to offer. A unique period drama with a bit more to offer than meets the eye, The Illusionist may be one of the better films to come out of the post-Summer movie season this year.

Alcohol/Drugs: Some people are seen with casual drinks during the story.

Violence: Leopold backhands Sophie across the face; a person presumably slices another on the neck (we don't see it), we then see the victim ride away on a horse, slouched over with blood seen stained on the horse; a dead body is found floating in the water; a man threatens to kill another and then turns their gun on himself and kills himself. Disclaimer: All reviews are based solely on the opinions of the reviewer. Most reviews are rated on how the reviewer enjoyed the film overall, not exclusively on content. However, if the content really affects the reviewer's opinion and experience of the film, it will definitely affect the reviewer's overall rating.