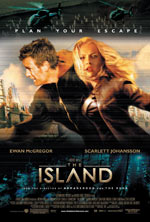 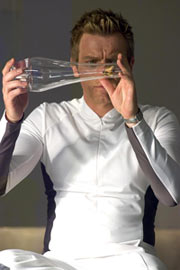 Lincoln Six-Echo (Ewan McGregor) is a resident of a seemingly utopian but contained facility in the mid-21st century. Like all of the inhabitants of this carefully controlled environment, Lincoln hopes to be chosen to go to the The Islandreportedly the last uncontaminated spot on the planet. But Lincoln soon discovers that everything about his existence is a lie. He and all of the other inhabitants of the facility are actually human clones whose only purpose is to provide spare parts for their original human counterparts. Realizing it is only a matter of time before he is harvested, Lincoln makes a daring escape with a beautiful fellow resident named Jordan Two-Delta (Scarlett Johansson). Relentlessly pursued by the forces of the sinister institute that once housed them, Lincoln and Jordan engage in a race for their lives to literally meet their makers... (from TheIsland-TheMovie.com)

Michael Bay has made a name for himself by creating loud, elaborate, and often silly action films. From The Rock to the Bad Boys films to Armageddon and Pearl Harbor, Bay has learned how to effectively make films built around blowing things up in large scale. While his latest film is a departure from his normal approach, using a tense sci-fi thriller story, it still turns into a typical blow-stuff-up action film before too long.

The Island has a lot wrong with it, but the initial plot and storyline is rather intriguing. If you know anything about the story, you already know it's based around McGregor's character Lincoln Six-Echo who believes he's living life as a survivor of a severe incident that left few alive (and "uncontaminated"). When he discovers the hard way that he's merely a clone of someone else in the real world, he escapes and the chase is on -- and so is the action. McGregor once again embodies a naive and simple-minded character (somewhat similar to his role in Big Fish) and plays it wonderfully. You feel for Lincoln's innocent nature and the struggles he's going through with trying to escape the harsh realities of his cloned life. Scarlett Johansson was also surprisingly good in a completely different role from her usual ones. More known for her contributions to indie films like Lost In Translation or In Good Company, it's almost strange to see her in a big budget action film. But she plays alongside McGregor quite well. However, old faithful Steve Buscemi stole each scene he was in. The often neurotic actor played a great down-to-earth worker of the cloning facility who helps Lincoln and Jordan out. Sean Bean, an underrated actor who is typecast as a bad guy in nearly each film he stars in, was great as well. 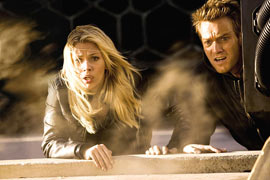 Storywise, the schizophrenic nature of the film mostly works to its disadvantage. To take a smart and thrilling sci-fi flick and twist it into a mindless action film isn't really the best card to play in filmmaking. In the end, it still made for an entertaining ride, but the composition seemed somewhat forced and in disharmony. It may have worked better for Bay to pick a genre for the movie and stick with it all the way through. However, I still found the combination forgivable. Knowing, going into the movie, that action films are Bay's speciality, you sort of know what to expect. But it does tend to dumb down the film. One of the moments of the film that really rides the fence as corny is when a clone meets their original person they were cloned from. Certain aspects were really well developed while other aspects just made it seem inappropriate and maybe even campy for such a film.

Content pushed the rating envelope as well. The darkness of the sci-fi element made certain sequences all the more intense. It was sort of reminiscent to the grit of Minority Report but delivered in a different style. We see surgical buzz saws slice an unconscious man's chest but don't see the incision open (as it's covered by a wrap or small sheet). As they run away in sheer panic, we briefly see hooks latch onto the back of the character's legs (and see those penetrate the skin) as they get dragged across a floor. Finally, we also see a hand nailed to a door from being impaled with a nail gun with some bloody results. Other disturbing imagery is present, even somewhat similar to how humans were "grown" in The Matrix, but most is not graphic and is merely creepy in a sci-fi nature.

A handful of colorful language is present, including a really unnecessary use of the "f" word. But one of my biggest pet peeves for the film's content is in the area of sexuality. A character mentions their previous behavior of promiscuity has lead to contracting hepatitis, and reacts shocked upon learning that Lincoln is a virgin. In fact, the character makes it seem ridiculous that he is [a virgin] and tells him he's in for a treat when he finally gives up his virginity. Although the scene is meant to paint the character in a poor light, it still comes off as sort of a promotional for losing your virginity - especially when Lincoln inevitably does. We then later see Lincoln and Jordan kiss passionately set to romantic music. The sensual sequence continues with various head and shoulder shots of the two kissing with his shirt off and Jordan just in her bra. No actual sexual act is shown, but it's obviously implied. It just seemed unnecessary and stupid to throw this into the story and it really added nothing to it. Leaving it out would have retained some of the delightful innocence the clones possessed that sadly gets tarnished instead. Despite being very inappropriate, it just felt out of place altogether. If the filmmakers had toned down the rougher edges of the language, violence, and axed the sensuality, The Island would have been a much more effective sci-fi thriller.

Overall, I enjoyed the performances and the story of The Island. It's unfortunate, however, that Bay left as much junk in the film as he did. It's enough to keep you home and either wait to watch it pruned a bit via an edited DVD (from the likes of CleanFilms.com or ClearPlay.com), or not at all. It's definitely not a family film, so if you decide to see the film despite its content, it's suggested to leave the kids at home.

Sex/Nudity: Lincoln sees scantily and bikin-clad women hung on McCord's wall and asks if they're his friends (as he's never seen anything like that before); We see a series of clones being grown in fluid-filled sacks from a distance that are nude, but no details are visible; We see a sexily dressed dancer in a bar; Lincoln pulls McCord out of a bathroom stall and throws him up against a wall. We see McCord with his pants down while he's in only his boxers and a mand walks in on them, thinking they're gay and that the incident is sexual in nature (when it's obviously not); McCord tries to pick out clothes for Jordan to wear that are his wife's (or girlfriend's) and when she pulls out a french maid outfit and a sexy nurses outfit, he tells her they're not to wear, but are mail order; Tom says that his promiscuity lead to contracting hepatitis (stating he had "lots and lots of sex") and acts shocked upon learning that Lincoln is a virgin. Tom comments that he can't believe it considering he's been running around with Jordan and tells him he's in for a treat (insinuating that he will sleep with Jordan). We later see Lincoln and Jordan kiss passionately and then fall onto a flight of stairs, while the scene is set to romantic music. The sensual sequence continues with various head and shoulder shots of the two kissing with his shirt off and Jordan just in her bra. No actual sexual act is shown, but it's obviously implied. Some other minor sexually-related dialog is present as well as some views of women in bikinis.

Blood/Gore: We see images of people with pale skin that exposes veins through the skin; We see a rather gross "birth" of an adult clone being cut out of its sack, with goo and fluids gushing out of it; We see surgical buzz saws slice an unconscious man's chest but don't see the incision open (as it's covered by a wrap or small sheet with a tiny bit of blood), but do see them run in panic when they awaken; We briefly see hooks latch onto the back of a character's legs (and see them penetrate the skin) as they get dragged across a floor; We see a man reach into a hole in a door that Jordan shoots with a nail gun. We don't see the impact, but see a brief shot of the hand nailed to the door afterwards; Lincoln has some blood on the side of his head; A man is shot in the leg and there's some blood; A man is shot in the throat with a harpoon gun and we see some blood on their hand (but not the impact of the shot or a direct view of it)

Violence: Lincoln has some violent nightmares that include him being drowned. Some of the nightmarish imagery may be unnerving or seem violent; There is a lot of shooting, car crashes, explosions, and deaths; A woman is executed by injection; A group of people are put into an incinerator to die (but escape); A person is struck with a harpoon gun and screams in pain from it (and continues to be attached to it), and lots more action-related violence. See also "Blood/Gore" Disclaimer: All reviews are based solely on the opinions of the reviewer. Most reviews are rated on how the reviewer enjoyed the film overall, not exclusively on content. However, if the content really affects the reviewer's opinion and experience of the film, it will definitely affect the reviewer's overall rating.