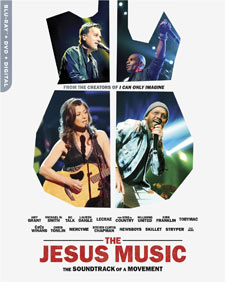 This documentary reveals Jesus Music's untold story - from its humble beginnings at the Calvary Chapel in Costa Mesa, California through its transformation into the multi-billion-dollar industry of Christian Contemporary Music today. (from IMDB)

If you've been following Christian music for any amount of time, then you've probably heard the term "Jesus Music" at some point. In the late 60's / early 70's, a revival took place around the world that was quickly dubbed the Jesus Revolution, and was largely fueled by a new musical movement called "Jesus Music." Out from the hippie movement came a different kind of passion for spreading love, and a love for Jesus was at the center. The Erwin Brothers' new documentary The Jesus Music, takes a deep look into the start of what we consider CCM (Contemporary Christian Music) today, by interviewing the pioneers of modern Christian music.

It's no easy task to try to chart the course of Christian music's rise through history, and focusing on a small group of artists to tell this story certainly seems like the right way to go about it. At the center of this story is Michael W. Smith, Amy Grant, TobyMac and Kirk Franklin, who have all had their share of ups and downs in their musical journeys. The documentary begins in 1968, showing the hippie movement spawning "Jesus Music," and we hear from artists like Lovesong and Glenn Kaiser, who openly talk about drug use prior to coming to Christ. We then fast forward to the 80's and start to hear about the rise of Christian rock and metal, and the major influence Stryper had on the genre, as well as in the mainstream world. (It was especially interesting - and heartbreaking - to hear how the Sweet family had been led to Jesus by watching Jimmy Swaggart preaching on TV, and when Stryper rose to fame, Swaggart went out of his way to denounce Stryper as music of the devil!) Artists like Skillet's John Cooper and for KING and COUNTRY's Joel Smallbone briefly share their experience with Stryper, but we end up not hearing from them again for the rest of the film, which really surprised me. After Stryper, the focus shifted to Amy Grant and her growth from a humble songwriter to a pop sensation, and how she struck up an unlikely, yet lifelong, friendship with Michael W. Smith. One of the most interesting segments comes, though, when the spotlight falls on DC Talk and their rise to fame. We hear about how the trio formed, and then are treated to stories from all three members -- TobyMac, Michael Tait and Kevin Max -- including some details on some of the reasons for the band splitting. They then briefly talk about their careers following DC Talk, which feels a little like a gentle nudge to fans that it's time to move on and let the trio's run stay in the past.

Some fond light is shed on the "glory days" of CCM in the 1990's, when musical diversity really hit its peak in Christian music and the genre really became a business. The spotlight is moved over to Kirk Frankin who shares about his struggles growing up and trying to make it in the music business. We hear about the mainstream success of his song "Stomp" and how it was only then that the Christian market started to embrace him and his artistry. Lecrae chimes in on Franklin's mentorship and impact on the industry, too, before the focus begins to shift to the 2000's where Smitty recalls that the focus seemed to have been getting lost on just why people were making Christian music. A passing mention is made to how major labels were purchasing all of the indie Christian labels, but it seemed like a significant shift in power that warranted some more focus. Smitty reveals his reluctance to recording a worship album in 2001, but answered a call from the Lord in the middle of the night to make the record, which fatefully released on September 11, 2001 when people in the U.S. certainly needed something to give them hope. This takes The Jesus Music in a trajectory towards the surge of modern day worship and how it feels like a rebirth of the original Jesus Music movement. With interviews from Chris Tomlin and Hillsong's Joel Houston, the songwriters reflect on the global impact of worship music, and what that has done for the church. However, it's all shown as rainbows, butterflies and sunshine, with no mention of the digital age's affect on music sales and production, or how the major label's string-pulling of the industry has affected where music is Christian music today.

The content of The Jesus Music is pretty tame, with no real profanity used, and only a couple lingo uses of God's name used in a non-offensive way (and one so-so use of "h*ll"). There are several references to drug use, especially in the 60's, and, in Russ Taff's case, alcoholism (which is a very moving segment of the film), but it's all handled tastefully and carefully. Throughout the film, we see some brief archival footage of rioting or racial attacks (like African Americans being sprayed with large hoses in the street), and some of that footage could be unsettling to some. There's a portion towards the end of the film that focuses on the transgressions of some artists in the industry, namely Amy Grant's largely publicized divorce from Gary Chapman and quick marriage to Vince Gill, and references to Sandi Patty and Michael English's career-killing extramarital affairs are only shown briefly in headlines as voiceovers mention the drama in the CCM industry. But Bill Gaither offers some truly sobering insight about how there are no perfect people in this ministry or industry, while Toby reminds us that they're all broken people making music for broken people. Many CCM listeners can't help but put their musical heroes up on pedestals, but we have to remind ourselves that they're flawed humans, just like us -- who just have been given the incredible opportunity to get up in front of others and share from their hearts.

If you're wondering if you can expect full song performances in The Jesus Music, you'll probably be disappointed to find that there are only snippets of music featured throughout. This makes sense given the film's documentary format, though, and it frequently jumps around from portions of music videos (like DC Talk's "Jesus Freak" and "My Friend (So Long)") to snippets from live performances from bands like Stryper or Hillsong. I actually heard some songs for the first time ever in this movie (particularly the 70's classics), and the way in which it's done is a nice way to get a sampling of the styles through the years. (Surprisingly enough, the massive Tooth & Nail Records era of 90's Christian rock isn't even mentioned or sampled.)

Unfortunately, some artists have more footage of them settling into chairs for interviews and smiling than actually talking in The Jesus Music. Especially when you see snippets of these artists at the beginning of the documentary, you assume you'll be hearing from them later, and sadly, for some of them, that's not the case -- or, if we do get to hear from them, it's extremely brief. In some ways, The Jesus Music feels like an hour-and-40-minute trailer for a docuseries on Netflix. I can't help but feel like this should have been a mini-series instead, with an episode or two on each decade, or full episodes dedicated to one artist -- like DC Talk, Amy Grant or Kirk Franklin. (The Movies That Made Us is a fantastic example of a docuseries that works in an episodic form.) It's such a tease to see some people for mere split seconds and never hear them talk. And, sadly, there are no special features with this disc release that offer more interviews, and seeing their faces appear (in the interview chair) in the documentary is evidence enough that these interviews exist, but we may never see them. Furthermore, there also isn't even a making-of featurette included; I would have loved to hear the heart behind this project. The absence of these things make the movie feel a little unfinished or incomplete.

When The Jesus Music finishes and the sounds of TobyMac's "The Slam" begins, you may just find yourself looking at Christian music in a much different light. The Erwin Brothers tell the tale of music about Jesus in an honest and engaging way, keeping The Jesus Music moving at a brisk pace despite its nearly 2-hour runtime. However, trying to pack so much material into a feature-length movie may do the story, and its talent, a bit of disservice as they try to cram a bit too much into a story that has a lot of meat to it. Still, if you're looking for an informative documentary about the music we've grown to love, The Jesus Music is a solid effort. (Oh, if you stick around till after the film's credits finish rolling, you'll be treated to a small snippet from a classic Carman music video.)


The Jesus Music is now available on Blu-Ray, DVD, and Digital. The Blu-Ray disc includes the following extras:

Digital Copy - If you were hoping to choose your vendor for the digital copy that Lionsgate offers with The Jesus Music, you'll be disappointed to find that you'll only get one option: Fandango's VUDU. It's still a great service, but personally, I'd have loved the option to choose my digital provider.

The Jesus Music in Blu-Ray HD - The film looks really lovely in HD on Blu-Ray disc, but keep in mind that pretty much all archival footage is in SD, and often looks grainy or out-of-focus. It's okay, though, because we can't exactly expect the limited technology of the time to have been remastered for a documentary like this. However, all of the interviews and reenactment footage is in high quality HD video.

"Sing Again" Lyric Video (5:47) - Michael W. Smith introduces the only special bonus feature on the Blu-Ray disc, a lyric video for his song "Sing Again," which was on his album, Worship Forever.

Sex/Nudity: A Larry Norman lyric is quoted that says "gonorrhea on Valentine's Day, you're still looking for the perfect lay"; We see headlines that reference the extramarital affairs of Sandi Patty and Michael English

Alcohol/Drugs: Lovesong, Greg Laurie, and Glenn Kaiser talk about taking drugs and trying to figure out who God was in the 60's; A Larry Norman lyric is quoted that says "drinking whisky from a paper cut" and referencing shooting up until they're half insane; Michael Sweet mentions a time in his life when he was drinking a lot and it was affecting life with his family; Russ Taff talks about his battle with alcoholism, which was something his father also struggled with.

Violence: We see actual archival footage from 1968 of rioting and hippie protests and festival gatherings; We see a dramatic slow motion shot of a guitar and record player shattering on the floor; Michael Tait tells the story of being threatened to be hung in Tennessee just for being black, and we see archival footage of African Americans on the street being sprayed with large hoses of water; We see a photo burning. Disclaimer: All reviews are based solely on the opinions of the reviewer. Most reviews are rated on how the reviewer enjoyed the film overall, not exclusively on content. However, if the content really affects the reviewer's opinion and experience of the film, it will definitely affect the reviewer's overall rating.