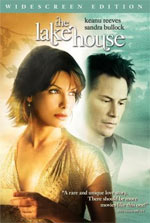 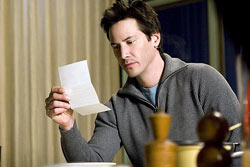 This love story concerns a lonely doctor (Bullock) and a frustrated architect (Reeves) who live in the same house two years apart and fall in love by way of letters they exchange through a mailbox that mysteriously bridges time.
(from MovieWeb.com)

Being somewhat of a romantic myself, I happen to find enjoyment in a good romance film. When done properly, a romantic film can encourage romantic feelings or just at least leave you with a nice warm fuzzy feeling when you exit the cinema (or finish watching it on video). The romantic comedy is my preferred genre in this case - as long as it actually is funny - but I definitely find a good, solid romance movie (or "chick flick") enjoyable from time to time. 2006's The Lake House approaches the genre from an almost completely serious direction, and reunites Keanu Reeves and Sandra Bullock on screen for the first time since they appeared together in 1994's blockbuster Speed.

The Lake House is a sensitive and touching thinker of a film. Complexly using time travel elements to cause two people to meet who otherwise wouldn't have, the plot can be somewhat confusing at times, expecting the viewers to suspend their disbelief for its running time and take the film's happenings as they come.

The intriguing premise finds two people corresponding via handwritten notes that are sent and received through a mailbox outside of an Illinois lake house. The key is... one of them is writing in 2006 while the other is writing in 2004... while the two years play out simultaneously. These two lonely workaholics find solace in each other's messages, however, and it isn't long before they fall in love. But as if conversing over the space time continuim isn't a complex plot element enough, each character has their own little dramas going on. For Alex (Keanu Reeves), he's recently returned to his fellow architect father and brother from an apparent four year absence, with plenty of hurt being laid out on the table to confront. Meanwhile, two years later, Kate (Sandra Bullock) is dealing with loneliness on (and off) the job as a doctor, who has trouble letting people into her life, including an ex-boyfriend who inconveniently shows up a few times looking to work his way back in. All of this adds up to a real meaty story to chew on as you watch, and attempt to digest afterwards. And while much of it -- particularly the "magical" mailbox and time hopping -- doesn't really have an explanation or make a lot of sense, it makes for one fabulous little story. 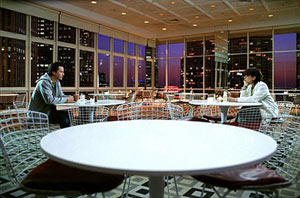 Although often ridiculed for stiff or bland performances, Keanu fairs quite well in The Lake House from his previous dramatic efforts. Alex has plenty of inner turmoil due to his family issues as well as the struggle with trying to carry on a "long distance" relationship through handwritten letters. Reeves may have his best performance to date on his hands with The Lake House, even if a few of his moments can still be a bit rusty. It was also nice to see Bullock in something besides a romantic comedy. And while she has plenty of films to her name that weren't romantic comedies, she seems to have become most known for those roles. The Lake House creates real characters and real people, and while the phenomenon may be way out there, they're people we can relate to on a personal, intimate level.

The filmmakers execution of their relationship over handwritten letters is often interesting as they bend the rules of reality, or play with the placement of the characters in their separate times. For example, if the two are talking via letter, by writing or reading it aloud while both are at the lake house in their own times, Agresti will use a fade of the two seemingly in the same place. This gives the illusion that they're existing in the same room, talking to each other when that simply is not the case at all. It makes it easier for the audience to picture the two together and interact more even if just imagined. This doesn't doesn't come without its problems however, because it can seem a little awkward or contrived when the two are conversing aloud while "composing" their letters to each other.

Although The Lake House demands for viewers to use their imagination and be forgiving with its sense of implausibility, it's a fine romantic film that has enough charm, heart, and intrigue to get by. It's rated PG merely for thematic elements (there's plenty of dramatic moments, including a person being hit by a car, which we do not actually see), and a few uses of language, but it's nice to have a romance film that's not bogged down by considerable sexual content or excessive language. Trimming out the little existing language would solidify this as a family film, but the resulting film may still be a little rough for younger ones. Regardless, it's a fine outing for the grown-ups who are willing to enjoy The Lake House for what it is, and maybe have a little something to discuss afterwards. - John DiBiase (reviewed: 6/23/06)

Sex/Nudity: We learn that Kate and Morgan are living together; We see Alex and Kate kiss (despite her involvement with Morgan); Alex and Kate again passionately kiss.

Alcohol/Drugs: There is some drinking of beer and champagne, particularly in a party setting.

Violence: We hear that a person is hit by a bus and see the accident, but don't see the impact of the person being hit. Disclaimer: All reviews are based solely on the opinions of the reviewer. Most reviews are rated on how the reviewer enjoyed the film overall, not exclusively on content. However, if the content really affects the reviewer's opinion and experience of the film, it will definitely affect the reviewer's overall rating.