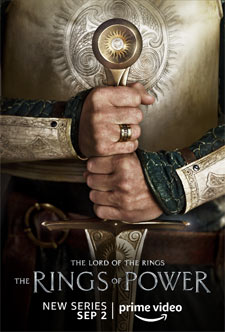 The Lord of the Rings: The Rings of Power (Season 1, Part 1)

Epic drama set thousands of years before the events of J.R.R. Tolkien's 'The Hobbit' and 'The Lord of the Rings' follows an ensemble cast of characters, both familiar and new, as they confront the long-feared re-emergence of evil to Middle-earth. (from IMDb)

It has been nearly 85 years since the beloved professor J.R.R. Tolkien first published The Hobbit, introducing us to the grand world of Arda and the stories of its Middle-earth. Within this children's book, he explored deep concepts of loyalty, friendship, and honor, as well as a very potent struggle between good and evil. These ideas and realms were further investigated two decades later through his more adult-oriented sequel trilogy, The Lord of the Rings.

While long considered the father of modern fantasy, Tolkien has enjoyed a triumphant resurgence over the past twenty years as a result of Peter Jackson's much-lauded film adaptation of The Lord of the Rings trilogy (and later The Hobbit, albeit to a lesser degree). These films, along with their associated merchandise, video games, board games, and other media have resulted in Middle-earth becoming one of the most marketable and profitable franchises of the twenty-first century.

While these four books were the only ones Tolkien published during his lifetime, he wrote tens of thousands of pages documenting the stories and histories of his worlds. Many of these, such as Unfinished Tales and The Silmarillion, would be posthumously edited and published by his son, Christopher Tolkien. While the original rights to these other literary works remain unsold, the "appendices" to The Lord of the Rings trilogy were available for purchase. These appendices contain many fragments of information about Middle-earth, its creation, and the history of the elves, dwarves, and even the forging of the twenty eponymous rings of power.

Many waves were made when Amazon first announced the acquisition of these rights and set out to produce the most expensive TV series ever created. Further waves have come in relation to Amazon's recent push towards various political and social ideologies, many of which are far out of line with Tolkien's Catholicism and personal values. The (predictable) barrage of social media smut and clickbait headlines struck long before the first trailer dropped, leading to a controversial debut where nearly all critiques skewed on either far end of the spectrum. Allegations of "wokeness," anti-religiosity, and racism have been slung back and forth without end. However, the first eight-episode season has now passed its halfway point. As the vitriol has slowly begun to quell, it is now far more possible to evaluate the series based on its own merits, rather than by the regurgitations of assorted culture warriors.

The Rings of Power takes place in Tolkien's Second Age, set roughly five thousand years before the events of The Fellowship of the Ring. A handful of familiar characters from the books and films greet the audience, such as Galadriel and Elrond. Furthermore, the unimaginably beautiful cinematography and style recognizant of Jackson's films continues to draw in the audience at the launch of this series. Furthermore, the original composer of The Lord of the Rings films, Howard Shore, returned to consult and partially compose the music for The Rings of Power, while television veteran Bear McCreary (a personal favorite) has taken on the brunt of the music composition. His themes and motifs are majestic, and even those who don't intend to watch the series would do well to listen to the orchestrated soundtrack, which serves as a new benchmark for quality scoring.

Much of the criticism towards the series has been directed towards the racially diverse cast, and how many of these castings are in opposition to Tolkien's vision of Middle-earth as a mythos and saga for Western Europe. While the racial diversity of the actors and actresses is certainly heavy-handed, and the criticisms are not without merit, I would encourage viewers to set aside these complaints, as they do little service at this point. Keep in mind that this series is being marketed globally, and Amazon's top priority is to generate money from all regions. As actors, the cast has done a phenomenal job thus far. (Robert Aramayo's Elrond and Sophia Nomvete's Disa immediately come to mind.) When the casting objection is disregarded, the rest of the allegations of "wokeness" hold little water, especially compared to the rest of Hollywood's standard messaging.

In fact, I laud the series for its boldness in emulating many "Tolkienisms." Oaths are taken seriously, and honor and trustworthiness - even at great cost - are shown to be tantamount to one's soul. While some of the verbiage and semi-prose comes off as slightly floundering (at least in the midst of the current obsession with conversational wit), much of it indeed fits into the realm of high fantasy. Some lines could almost be pulled off of the pages in one of the Professor's own books.

One of the series' flaws is that the backstories, while important, are often too detailed and arduous to effectively communicate. For example, Galadriel is portrayed as a young woman, when at the time of the show, she is the second oldest elf in Middle-earth. Many of her impetuous actions and rash decisions initially come across as those of an immature or inexperienced child. Rather, they are those of an older woman bearing centuries of grief. This shift in perspective partially alleviates this apparent Mary-Sue and replaces her with something deeper.

There are a few areas where the adaptation is not faithful to Tolkien, but the same was true when Jackson made his films. Adaptations are never fully faithful, and in this situation, there simply is not enough content in the source material to make this show into something substantial. However, stretching the source material has also delivered fun new characters, such as the "Harfoots" (also known as proto-hobbits by the writers), which creates an open-ended narrative where even the most well-read Tolkien fans and scholars are unsure of where their quite literal path will end. 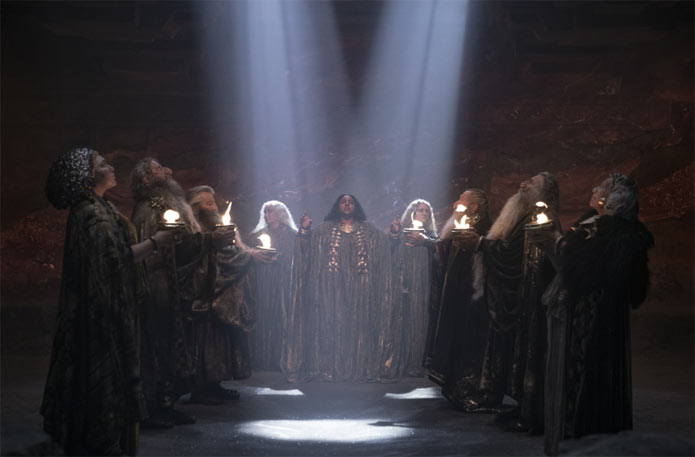 Many of these book readers have also found that this show condenses the timeline of events. Sauron's machinations take place over millennia, but it is difficult to convey those types of events to viewers, especially when many of the secondary and tertiary characters are mere mortals. Additionally, while some viewers have dubbed the show as being "too slow," I believe it moves along at a fine pace. It takes its own time to breathe and has effectively introduced various characters and settings for the unfolding story of Middle-earth. There have been no major battles or large-scale scenes of intense action, but those are coming. Now having completed the opening five episodes, I effortlessly recommend The Rings of Power for nearly any fan of fantasy or Tolkien, even if they have only watched Jackson's films. If viewers set aside the exaggerated tales of what they've been instructed to think and choose rather to make up their own minds, I am confident that they will find much to enjoy.

It's pretty much identical to that of The Lord of the Rings films: Violence, frightening images, scenes of war, creature violence, and a little crass humor from the dwarves (including a cut-off "take a sh--"). Disclaimer: All reviews are based solely on the opinions of the reviewer. Most reviews are rated on how the reviewer enjoyed the film overall, not exclusively on content. However, if the content really affects the reviewer's opinion and experience of the film, it will definitely affect the reviewer's overall rating.