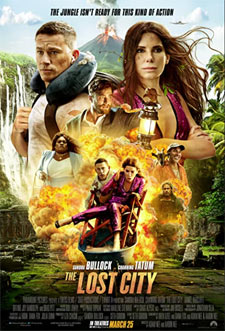 A reclusive romance novelist on a book tour with her cover model gets swept up in a kidnapping attempt that lands them both in a cutthroat jungle adventure. (from IMDB)

The rom-com genre has always been a difficult balancing act. To find the right mixture for the most accessibility for both sexes, there usually has to be plenty to appease the guys attending for the laughs and enough romance to make the ladies swoon. The Lost City is the latest entry in the genre, uniting Sandra Bullock and Channing Tatum for the first time in an adventure-driven romantic comedy that brings to mind one of the first genre hybrids from the 80s, Romancing the Stone. 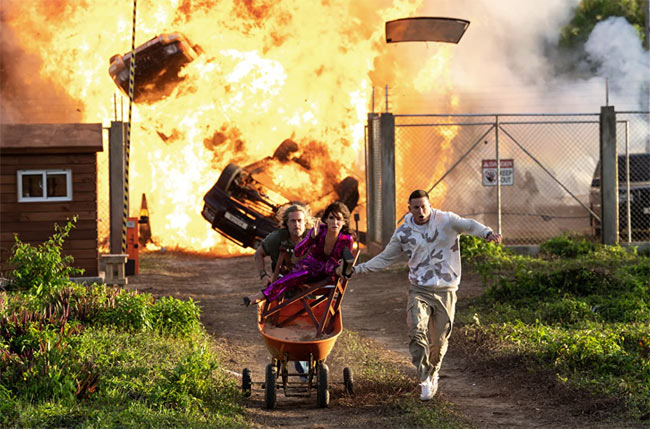 While Romancing the Stone followed a romance novelist into the jungle on an unexpected adventure while attempting to rescue her sister from drug lords, The Lost City also follows a romance novelist into the jungle, but the circumstances are considerably different, and the similarities pretty much end there. In Romancing the Stone, the author meets a man in the jungle who is a lot like the fictional hero of her novels, and he sweeps her off her feet. She's a hopeless romantic just aching to find her knight in shining armor. In The Lost City, the author, Loretta - played by Bullock - is a widower who hates the novels she writes and is far more interested in the history behind the archaeological adventures in her stories. This causes her to get kidnapped by a fortune hunter who believes her knowledge could help him find a long lost city in the jungle. Attempting to come to her rescue is her dopey pretty boy cover model, Alan - played by Tatum, who really wants to prove he's more than just a pretty face. The end result is a light-hearted and fun romp through the jungle that should have enough laughs, action and romance to appease the pickiest of viewers. 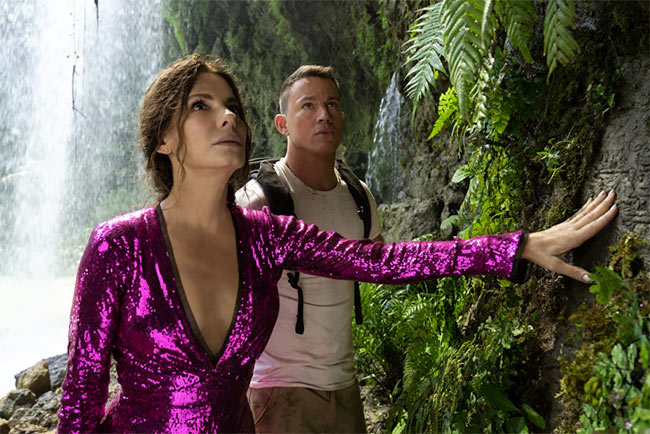 Despite Sandra Bullock pushing 60 years old, she still looks good for her age and has plenty of spring left in her step for a role like this. Tatum is over 15 years younger, but their romance surprisingly works on screen as they have an obvious chemistry (and their age difference is never really defined). Both have successfully starred as dramatic actors as well as comedic ones, and it's especially refreshing to see Bullock return to a lighter performance, especially after most of her recent roles have been in thrillers or dramas like Bird Box and The Unforgivable. The Lost City doesn't take itself too seriously, leaning into being a comedy more than any other genre, and it works really well. Still, it offers plenty of romance to scratch the itch of anyone looking for their heart to flutter, so it makes for a nice date movie at least. 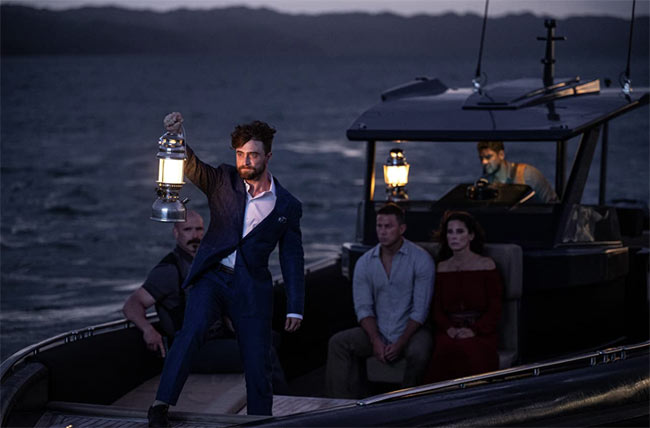 The Lost City just barely misses the mark of being a family movie. One shocking act of violence sends a large blood splatter onto a person's clothing and face, and while we never see the victim's gruesome wound, the blood splatter on someone else is focused on for a bit, with the person freaking out about having the victim's brains on their face and getting blood in their mouth. It's played for laughs, no doubt, but it's likely to disturb some who weren't ready for the shocking moment. Then there's a prolonged sequence where Tatum's bare butt is visible while Bullock picks leeches off his skin. It's also played for laughs (and is pretty funny, I must admit), as she removes the sticky little creatures as he stands there naked. He then turns around for her to check his front (which we don't see), and she humorously reacts to the size of his unseen manhood. Otherwise, language is pretty sparse, with just 2 uses of the "S" word, an incomplete "mother--" in the mid-credits scene (which is a playful and funny additional scene), and a few uses of "*ssh*le" and "*ss" along with over a dozen uses of "Oh my G-d." There was one use of Jesus' name as an exclamation, while Bullock's character uses "cheese and rice!" instead, which is a substitute for blasphemy that I can't say I've ever heard before. Overall, the content is mostly tamer for a movie like this, and it surprises me that it's both as tame as it is and as edgy as it gets when it decides to be.

By no means a triumph or anything, but The Lost City is a satisfying romantic action comedy. The only character that felt perhaps a bit miscast was Harry Potter's Daniel Radcliffe as the chief villain - he just wasn't convincingly menacing enough or funny enough as needed. Instead, Brad Pitt's extended cameo is a true highlight of the movie, and he helps elevate the material in any scene he's involved in. The Lost City is mostly a delight, and those who are fans of the genre mash-up or any of the main cast won't want to pass on this one.

Sex/Nudity: Alan comments that he puts people in his phone under the name of what he knows them for, and lists the name example of "Stacy Butt Stuff"; While promoting Loretta's newest book, she is given a long pink sequin onesie outfit to wear that has a big cut down the middle of the outfit to show Loretta's cleavage; Beth shows a lot of cleavage in the outfits she wears; When Alan appears as Dash for the book tour, women ask for him to rip his shirt off. Loretta agrees to do it but accidentally gets his wig caught in her watch and they fall over; We see Alan without his shirt in several scenes; When Alan removes his shirt at one point, we see leeches all over his skin. Loretta removes some of the leeches and then he drops his pants to reveal that there are more on her bare butt (and so we see his bare butt several times during this scene). When he asks her to check his front, she comments on the size of his penis (which we do not see) and appears flustered and impressed by it; Some other minor innuendo is spoken during the movie.

Alcohol/Drugs: Allison is seen drinking mini liquor bottles and talking with slurred speech; Abigail has some drinks during the film; People have some drinks in a restaurant; Some of Abigail's thugs and he have drinks in his vehicle and Loretta takes some and lights it on fire.

Blood/Gore: Alan has a little bloody cut above his eye; A person is suddenly shot in the head and a large blood splatter is seen on a person behind them. As they jump in a car and drive, the person with the splatter on their face freaks out about having brain matter on their face and getting some of the victim's blood in their mouth. We see the splatter on the clothes a few more times and later, after they shed the outer shirt that has the most blood on it, we just see a few drops of blood on their collar for the rest of the movie; Alan has some blotches on his bare skin where leeches were pulled off.

Violence: We see Alan and Loretta in Loretta's imagination as she writes her book, and we see them tied down in the middle of a temple with snakes crawling all around them. Nothing happens, however; Loretta agrees to do answer her audience's call to rip off Alan's shirt but accidentally gets his wig caught in her watch and they fall over; A couple thugs drag Loretta away and force her into a car; Loretta is strapped to a chair when she meets Abigail. They then use chloroform on her to knock her out; We see Abigail zip-tied to a chair; Jack infiltrates the camp Loretta is being kept in and beats up many thugs violently. Alan tries to help but ends up slapping a couple guys after they were already hit by Jack; A man is shot in the head and presumably killed instantly, with his blood splattering on others around him; Alan stuffs Loretta - while still tied to the chair - into the back of a small car as they're being chased. The door is broken off and the car is shot up in the process; The car accidentally falls off a cliff and crashes below; Two motorcycles crash into each other and go off a cliff; A man falls off a cliff into a pit below, presumably dying; A woman is captured and forced into a vehicle; Loretta causes alcohol to ignite inside a vehicle; Alan fights a man on top of a vehicle; Two people are left inside a tomb to die (but they escape); And other action violence. Disclaimer: All reviews are based solely on the opinions of the reviewer. Most reviews are rated on how the reviewer enjoyed the film overall, not exclusively on content. However, if the content really affects the reviewer's opinion and experience of the film, it will definitely affect the reviewer's overall rating.