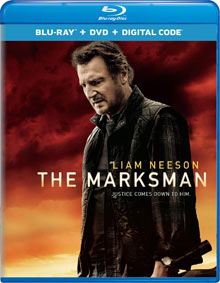 A rancher on the Arizona border becomes the unlikely defender of a young Mexican boy desperately fleeing the cartel assassins who've pursued him into the U.S. (from IMDb)

The Marksman is the latest entry in Liam Neeson's return to the action genre. While there isn't quite as much action in The Marksman as his recent movies, The Commuter or Honest Thief, his latest film still gives him a chance to fight off bad guys and get into some fisticuffs along the way. While many are quick to write off Neeson's current age of 68 (and he was probably 66 or 67 at the time he made this movie), the story of The Marksman seems more fitting for his character and what he's reasonably able to do at this age. In this movie, Neeson plays a man named Jim who is a lonely widower living on a ranch in Arizona near the Mexican border. When he encounters a young boy fleeing the threat of the Mexican cartel, Jim ends up escorting the boy on a road trip to reunite him with family.

The Marksman is probably most comparative to Tom Hanks' recent film, News of the World. In both movies, the aging men are skilled war veterans who have to protect a child of a different nationality than them as they travel across dangerous lands to reunite them with family. The stories do not play out the same, however, and while Hanks' film was a period drama, The Marksman is set in modern times. Jacob Perez plays the young boy, Miguel, and is a good little actor. At times he does seem a bit dry, but considering the situation he's in, it does make sense. Still, I think the movie would have benefitted from a bit more warmth from his character. Neeson plays Jim rather gruffly, with a bit of a grumpy old man thing going on, but he does it well and it makes sense for his heartbroken, down-on-his-luck character. (Still, Hanks did inject his character with more hope and positivity which only bolstered his performance and character.)

As a story, The Marksman is more of a drama than an action film. There is some tension that builds nicely with Jim needing to be constantly looking over his shoulder and questioning the intentions of nearly everyone he encounters while on the road. Overall, the film moves a bit slowly with only bursts of action here and there. There definitely are still some great moments, though, especially during the climax of the film. Those looking for a real nailbiter, however, will be terribly disappointed.

There isn't a lot of spiritual content in the film's plot, but there's a sad moment where Miguel tries to encourage Jim that they'll see their loved ones again in Heaven, to which Jim shoots back in iritation, "There is no heaven, it's just something people invented to help them feel better" (or something like that). Miguel soon comments that he wished he could have a proper funeral for his mother, and Jim decides to pull over at a church and ask the minister to hold a service for Miguel. The minister then tells Jim that the boy's mother must have had a lot of faith in him to entrust her son to his care. It's a sweet moment and a sort of turning point for Jim, which adds some heart to the film. And, if anything, the movie does have some good heart to it, with a resolution that is bittersweet but fitting. 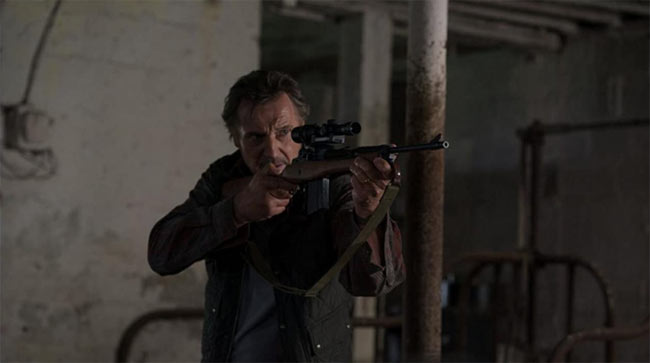 The content is definitely PG-13. There is one "F" word spoken from a highway patrolman and plenty of uses of the "S" word from Neeson, as well as regular uses of "d*mn" and "h*ll." There are also a few uses of "G*dd*mn" and 1 of "Chr-st." There's a good deal of violence, with some bloody results. In the early scenes, Jim finds a wolf chewing on the underbelly of one of his cows (which we briefly see), and then he finds an injured man with bloody feet. Later, multiple characters have blood on their faces after some fights and a big car wreck. Several people get shot with a rifle throughout the film, but it's seldom bloody. The camera also frequently cuts away just as a gun is going off. Overall, the movie is pretty intense and violent at times, so I'd definitely encourage caution (and to check out the full list of violent instances below).

The Marksman is hardly one of this Oscar-winner's best films, but it's still an enjoyable Liam Neeson film. It's surprisingly got heart where it counts, and is a decent one to check out if you're a fan of the star or if you're looking for a little entertainment on a rainy afternoon.


The Marksman is available on Blu-Ray/DVD/Digital, DVD, and through the usual digital providers. Along with the feature film, the Blu-Ray disc includes one single bonus feature:


The Making of the Marksman (8:20) - This featurette is pretty light on content, but it covers the film's main characters and features interviews with the crew and actors Katheryn Winnick and Juan Pablo Raba. It's better than nothing, but hardly a comprehensive behind-the-scenes featurette. (1 "h*ll" from a scene from the movie) - John DiBiase, (reviewed: 5/9/21)

Sex/Nudity: Sarah shows some cleavage in the shirt she wears.

Alcohol/Drugs: We see Jim drinking in a bar and seeming drunk; Jim swigs a drink from a flask while driving; Jim has whiskey in a bar; Jim drinks from a bottle in a hotel room.

Blood/Gore: We see a man chained up by his hands under an overpass, and visibly beaten up with blood on his face and all down the front of his shirt; We see a wolf eating a dead cow's belly from a distance with some blood. Jim shoots the wolf then walks up to observe the sight. We see blood on both animals close up with belly of the cow torn up; Jim finds a man lying on the ground - alive - with bare feet that look bloody; A woman and child crawl through a hold cut in a fence. Part of it catches the woman's leg and it pulls at her pants. We see some blood dripping on the wire fence. As they run through, we see blood on her bare calf; A woman has blood on her shirt over her stomach; We see a small bloody cut on Mauricio's cheek; We see the woman with blood on her clothes, hands and a piece of paper she gives Jim; Jim shoots the driver of a car in the head (there's a tiny bit of blood briefly visible on his forehead); A car flips and crashes, there is blood all over the survivors' faces; We see blood on the side of Mauricio's face; Jim has blood on his face; A man has blood on his shirt and abrasions on his face.

Violence: Some spoilers ahead: We see a man chained up by his hands under an overpass, and visibly beaten up with blood on his face and all down the front of his shirt; We see a wolf eating a dead cow's belly from a distance with some blood. Jim shoots the wolf then walks up to observe the sight. We see blood on both animals close up with belly of the cow torn up; Jim finds a man lying on the ground - alive - with bare feet that look bloody; A woman and child crawl through a hold cut in a fence. Part of it catches the woman's leg and it pulls at her pants. We see some blood dripping on the wire fence. As they run through, we see blood on her bare calf; Jim shoots a guy and a gunfight breaks out; A woman has blood on her shirt over her stomach from a bullet wound; A man jumps onto Jim's truck as he speeds away and he reaches in through the driver's window and strangles Jim, who is able to throw him off; A woman dies of her wounds; The cartel set a house on fire and we see it burning; A member of the cartel guy grabs a girl by neck in a convenience store and threatens her. We then hear two gunshots that from outside the building, presumably killing her; A highway patrolman pulls a gun on Jim and they struggle over it. Jim's dog pulls on the man's pant leg. The men fall to the ground and Jim punches him repeatedly, knocking him out; A member of the cartel shoots an unarmed man dead in the street (the camera cuts away just as the gun goes off); Jim looks out his hotel room door and sees the cartel guys roughing up the hotel manager at a distance through the lobby window; A man shoots an animal, killing it; Jim teaches Miguel some target practice with a pistol, shooting cans; Jim shoots the driver of a car in the head (there's a tiny bit of blood briefly visible on his forehead); Jim shoots out a tire and the car flips and crashes. There is blood all over the survivors' faces; A truck is shot up and catches fire; Jim shoots down another guy from a distance. They open fire on the window from which he shot from; Miguel fires a pistol as a distraction and Jim shoots another guy who drops to the ground; A man holds a gun on a kid and grabs him roughly by the hair. Jim is shot and gets beaten up during a one-on-one fight. During the fight, a man is stabbed a couple times, a man's face is repeatedly hit into a metal pipe, and another man is shot; A man begs for his life before is to be shot and killed. He is then left to die, but is given a gun with one bullet in it. We then hear, from outside the building, a gunshot, signaling the man shot himself; We see another man close their eyes and die. Disclaimer: All reviews are based solely on the opinions of the reviewer. Most reviews are rated on how the reviewer enjoyed the film overall, not exclusively on content. However, if the content really affects the reviewer's opinion and experience of the film, it will definitely affect the reviewer's overall rating.