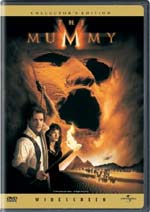 - for pervasive adventure violence and some partial nudity.

Rick O'Connell (Brendan Fraser) leads a group of explorers who accidentally awaken a mummy after 3,000 years who'd been cursed. Now they must stop this mummy's rampage of death and plagues before he can resurrect his lost love and begin a reign of evil terror.

The Mummy is a rather bizarre film that consists of an odd mix of moods; containing campy humor, grotesque mummies, eerie tomb scenes, and disgusting flesh-eating bugs. Sexual content is almost non-existent (aside some partial nudity due to a woman donning only paint), the language isn't too bad, and the gore is rather high. I have to say that this may have been the most intense movie I've seen to date. I couldn't sit still and the suspense really had me. One criticism (among several), however, is that the movie changed moods too much. From a really high-intensity opening that revealed the fate of Imhotep, who becomes the mummy, to a goofy scene where Evelyn (played by Rachel Weisz) is working in a library and falls off a ladder, knocking over every bookcase in the room, the movie just doesn't seem to be really certain whether it wants to be horror or comedy. But the intense scenes balanced the campy scenes. There was no Matthew Broderick running like a 5-year-old who had wet his shorts fleeing from a big monster (like last year's Godzilla, of course). Instead, the movie knew when to get serious and knew when the audience would need a laugh. And because of this, director Stephen Sommers was able to go to extremes on both ends of the spectrum several times.

For me, the worst part of the movie happened to not be the decaying mummies (not that those weren't grotesque, because they were), but those pesky little scarabs. They're these flesh-eating beetles that crawl under the skin and cause an untimely demise. There are two scenes where they show a scarab under someone's skin and both have pretty good warnings (for those of you, like me, who won't want to see those scenes). In one scene, the short, plump prison warden who Evelyn bribed to save Fraser's Rick, steals some priceless-looking mummified beetles. One of those mummified beetles decides to hatch and the scarab emerges and crawls into his boot, then up his body, crawling under the skin (and they show it in what feels like a long sequence). The second time, Evelyn's brother Jonathan holds one of those mummified beetles in his hand and it hatches and enters his arm before Rick rips it out by knife point. But the other really gross scenes come when the computer-animated mummy is walking around partially decayed. As he kills the people who set him free, he sucks the life out of them --leaving their ghastly shriveled up bodies-- and you see the various stages of his decay improve, till he's half-human, half-decayed (with holes in his skin where scarabs sometimes come out). In another gross scarab scene, a swarm is chasing everyone through the temple and a slave falls and they over-take him. Soon, all we see left of him is a gory mess of a carcass. Yeah, it's pretty unpleasant.

And as if all of that isn't obvious, the film is still very, very violent. But although people get shot and sliced and stabbed throughout the movie, there's no blood. There's a big battle scene in the beginning that is quite violent, but no blood is ever shown. And in another scene, the group of main characters are escaping the mummy and his zombified Arab followers in a car, and they are blocked by a mob in a trance chanting his name. Our heroes then decide to drive through the crowd, which throws bodies everywhere (there's no blood, but it's indeed violent). Later, one of the characters stays behind to fight off the mob with a sword while the others escape, and slices "bad guy" after "bad guy." Finally, in the climax, Rick and others shoot a series of mummies, blowing them apart. Stuff like this is just ridiculously violent, but not particularly bloody or gory - but it's enough to seem over the top as well. But even though when people are eaten or sliced or shot or cut and you don't see it, you still hear it, and that tends to be just as effective. Quite honestly, this movie probably should have been rated R.

In the beginning of the film, Anck-Su-Namun is shown with Imhotep, briefly, and all she is wearing is paint on her body. A mesh-like design is painted on her body, revealing most of her figure as she's virtually nude with just paint on. It's not obvious or especially sexual, but it's sensual enough, given she's naked.

As a whole, I still liked the film. It's tough because the characters - especially Brendan Fraser's Rick O'Connell - are really fantastic, but the content is often just ridiculously intense. Most critics didn't like the film and relentlessly compared it to Indiana Jones, but I think the movie held its own enough to stand apart from the famous hero. The Mummy is adventurous, suspenseful, scary and creepy, but also very much entertaining.

Overall, Sommers' remake of The Mummy is pretty good, but due to the gore and creepiness, I can't really recommend it with a clear conscience. I advise exercising strong caution before seeing this film. Also, the whole Egyptian mythology is a big part of the story. And when Imhotep tries to raise his deceased love, there's plenty of mystical Egyptian spirituality to make some squirm. However, in the end, it's a classic tale of good versus evil (and you can bet which one wins). Read all the content details carefully. It's a rough flick and NOT suitable for young kids (or even some adults).

Sex/Nudity: Anck-Su-Namun is shown with Imhotep, briefly, and all she is wearing is paint on her body, in the form of a mesh-like pattern, revealing most of her figure (so basically she's nude, with paint on)

Alcohol/Drugs: A lot of people drink alcohol from flasks and bottles.

Blood/Gore: Rarely any blood, lots of grossness and gore: there are many shots of mummies in different degrees of decay which may be gross or scary; When Imhotep's dead body is found, we see it's almost monster-look to its still-decomposing skeletal look. We then see Imhotep slowly regenerate as the film goes on as it grows more flesh and muscles, then turns mostly human-looking with some open, gross-looking holes in his cheek and neck. In one instance, we see a scarab crawl from the hole in his neck to the one in his cheek and he eats it. Some of the diggers have blisters on their skin after acid has sprayed on them. After a scarab enter's the warden's boot, we see the bulge of the beetle moving under his skin on his stomach as it moves up to his face. The mummy removes a man's eyes (which we don't see) but we do see his face, where his sockets look empty. Later we see his eyelids closed and they look bruised and sunken-in. We see the gory remnants of the body of a digger after a swarm of scarabs consume and partially devour him after he had fallen. We see several dead, shriveled up bodies of men who's life was sucked out by the mummy. We see a large mass of people with boils on their faces. The mummy of Anck-Su-Namun has no eyes. Rick cuts off Imhotep's human arm which, he just reattaches afterwards (no blood). After a man is impaled by a sword, we see some blood on his hand before he sinks into a pool of water and dissolves.

Violence: Shootings, a failed hanging, beetles moving under people's skin, a car running into people thus tossing them, decaying mummies, mummies alive, mummies being shot, sliced and decapitated and blown up, people eaten by scarabs, a person is stabbed, etc... Disclaimer: All reviews are based solely on the opinions of the reviewer. Most reviews are rated on how the reviewer enjoyed the film overall, not exclusively on content. However, if the content really affects the reviewer's opinion and experience of the film, it will definitely affect the reviewer's overall rating.