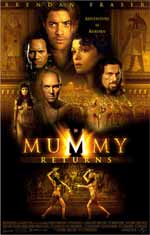 It's 9 years after the events in the first film happened and Rick O'Connell (Brendan Fraser) and Evy (Rachel Weisz) have married and now reside in London with their 8-year-old son Alex. The O'Connells go on regular digs 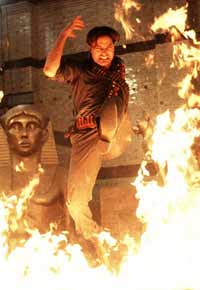 and treasure hunts, but when they find the lost Scorpion bracelet of Anubis, a chain of events happen that include the resurrection of the mummy, Imhotep (Arnold Vosloo). It becomes a race against time to stop Imhotep from resurrecting the Scorpion King (The Rock) and the army of Anubis warriors which would give him control to rule the earth.

Since the release of The Mummy in 1999, I've come to really like and appreciate the characters introduced in that film. Although the creepiness and violence facts are quite high in that movie, I find the characters irresistibly likable and the adventure aspect to be quite fun. So, hearing about the idea for a sequel in the summer of '99 became a guilty pleasure as I have anticipated a fun and action-packed sequel.

With a plot that seems a little bit forced and with the characters' background toyed with a little too much, we have been handed The Mummy Returns. It's action packed with little to no time to stop and really get yourself reintroduced to the characters. The first movie set up the characters and this one takes a new story and seems to literally run with it. However it also stretches their "origins" a little too far making almost all of them out to be more than they seemed to be originally planned for. As a fan of the characters in the original 1999 film, I was excited to see them again but felt a little uncomfortable with where their characters were being developed to. Without giving away key plot elements, the idea of reincarnation was heavily brought into this movie. I didn't find it threatening and it's not a movie to take seriously in the first place, so the main problem I had with it was letting myself accept a character who was seemingly normal and basic now being proposed as a reincarnated version of a former life. Stupid. But please keep in mind this is an adventure story. It's less scary then the first movie and just plain action and adventure with lots of light-hearted comedy tossed in to make it more enjoyable and fun. It constantly pokes fun at itself, the genre, and even the overall story. A lot more unbelievable and impossible things happen but seem okay because it should be expected and allowed in a film like that. So do not take the bogus idea of reincarnation seriously when you see this and just take it as what it is-- a plot element that makes some events that take place in the movie possible. I did enjoy, however, a very brief reference to the "Good Book" (meaning the Bible), although how can our God and all the Egyptian mumbo jumbo co-exist? The answer is-- it can't, but because this is a fantasy film, who cares? (merely because it is just a laid back fantasy story) So again, I say 'don't take all this too seriously at all.'

Violence is extremely high with wars, people dying left and right, a brief reunion with those wretched scarabs, a brief reoccurrence of that blasted curse that regenerates the mummy, and various other moments. Sex/nudity is minor. We do see a flashback to the scene at the beginning of the 1999 film which shows Anck-Su-Namun wearing nothing but a mesh design painted on her nude body (that doesn't really show any explicit nudity). Evy and Rick share intimate kisses throughout the film, but nothing beyond a touching/lovey-dovey moment. As far as violence, we often see slicing/stabbing motions with swords and knives, hear the unpleasant sound that accompanies it, but don't see any blood or explicit gore. When we see the scarabs rise from the ground again, they consume a few desert people with a brief visual of some running up the front of a man and exploding (with no bloody results) when they reach his face (which can be-- as I admit I did-- easily avoidable by the shutting of the eyes). It seems like the gory/really gross moments are a lot fewer here, but when

they are, they're briefly taken a step further. In the 1999 movie, Imhotep needs to kill some men to regenerate back to being human. He would suck them dry, basically, and leave almost skeletal remains. In The Mummy Returns, we see a man's face dematerialize and transfer as a mist to the mummy's face, which basically just shows what the mummy does to regenerate (that's not a condoning, but an observations). We also see, from a slight distance, the Scorpion King, at the end, tear apart a man (although, again, I admit I deterred my eyes). Apart from those there are many instances of people being shot, stab, sliced, etc, that aren't graphic, but just plain violent.

Once again, I must alert of the brief appearance of scorpions and tarantulas in the film. When Evy and Rick open a tomb in the beginning of the film, we see a sea of them on the floor, first from a distance (and unclear of what they are) and then close up. We then see them again later, and near the end of the film we see a sea of scorpions in the pyramid, and again at the very end as a person is consumed by them (non-graphically). Also, in the beginning, the Scorpion King picks up and bites into a scorpion (with gooey results).

The story is alright. It's a decent vehicle to bring the characters back with non-stop action and to be able to revisit these characters and see what they are doing after 9 years. My main complaint with the story and delivery besides the fast pace and the reincarnation issues, would be the Scorpion King's presentation at the end. (Spoiler Warning): The Rock, who played the Scorpion King, isn't used at all for the final presentation. He is merely presented as a fully computer animated half-human, half-scorpion creature. And worse yet, it looks horribly fake. It's amazing that in 2001, they couldn't do better than that. (End of Spoiler) On the positive end, the jokes and laughs are seemingly constant, especially if you expect that light-hearted approach to the genre. This sequel is a lot more geared to (probably diehard) fans of the original and is less likely to be warmly accepted by those who didn't like the first movie. If you hated the first movie, you'll despise this one. If you want a serious, scary movie, don't waste your time here. But to those who want to see it, be advised that it is violent and it is NOT for young kids in the least bit!

Overall, I liked the movie because it was fun, adventurous, funny, and the characters were great. However, I am not too thrilled with the excessive violence and I can't just recommend this film with a clear conscience. Rather, I will be honest to say I liked it for the reasons I did and want to warn those interested of what is in store for the viewer. With everything taken into consideration, I can't grant this film more than 3 stars. I advise caution before seeing this film! Read all the content details carefully. It's a rough flick and NOT suitable for young kids (or even some adults).

Sex/Nudity: We see Evy and Rick kiss passionately briefly several times during the film. We see Meela as Anck-Su-Namun in a flash-back passionately kiss Imhotep before it flashes back to the present to show her kissing a partially still decomposed mummy. We see a flashback to the scene at the beginning of the 1999 film which shows Anck-Su-Namun wearing nothing but a mesh design painted on her nude body (that doesn't really show any explicit nudity).

Blood/Gore: Seen from an odd angle of slightly behind, in a split-second we see a dead body fall to the ground at the end of a war where an Anubis warrior had just killed someone. At close examination of the this, it's noticeable that the dead body's decapitated head fell first before the rest of the body. The Scorpion King picks up a live scorpion and bites into it, with kind of gross results. A bunch of scarabs enter a man's body and we see some moving up his chest, around his back, and up to his face where they explode out, but the shot is shown from a distance and we don't see any blood or anything. When Imhotep returns, he's again a partially decomposed mummy that may seem gross to some viewers. Ardeth Bey receives some bloody cuts in a fighting scene. We briefly see a man's face vaporize and drift in the air to become part of Imhotep's partially decomposed face. We briefly see the man's face without much skin and have something of a skeletal look (as he's now dead). While in the jungle, we see close-ups of some shrunken heads as well as skeletons in cages. A man inserts his arm into a hole in a wall and it gets stuck. Shortly thereafter, he screams and we hear crunching noises. He pulls it out and we see his hand is now gross and boney/gooey looking. After Jonathan is cut with a dagger, we see a little bit of blood on his shirt. Anck-Su-Namun receives a slightly bloody cut to her face. In the form of half man, half large scorpion, we see from a distance as The Scorpion King grabs a man and tears his body into several pieces (not explicitly bloody).

Violence: Extreme violence. Many people get stabbed, sliced, shot; a man is torn up; mummies and skeletons are sliced up, etc, etc Disclaimer: All reviews are based solely on the opinions of the reviewer. Most reviews are rated on how the reviewer enjoyed the film overall, not exclusively on content. However, if the content really affects the reviewer's opinion and experience of the film, it will definitely affect the reviewer's overall rating.