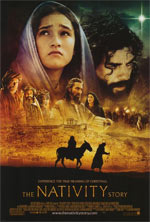 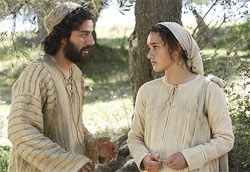 New Line Cinema's The Nativity Story chronicles the arduous journey of two people, Mary and Joseph, a miraculous pregnancy, and the history-defining birth of Jesus. The dramatic and compelling film traces the perilous journey of a young couple who must travel from their home in Nazareth to Bethlehem, Joseph's ancestral home, to register for a census ordered by King Herod. It is a journey of over 100 miles, through treacherous terrain, made much more difficult by the fact that Mary is nine months pregnant. The actual story of the Nativity can be found in the Biblical Gospels of Matthew and Luke. It begins at the end of the intertestament era - the 100 or so years between the time of Judas Maccabeus and the birth of Christ...
(from MovieWeb.com)

It really is no surprise that The Nativity Story would come to pass following the unexpected runaway success of Mel Gibson's The Passion Of The Christ two years ago. The Nativity Story offers a much lighter thematical focus than Gibson's venture, which one would think would draw a much wider appeal than The Passion, but part of the latter's success was its wonderful execution of the story. Gibson drew memorable performances from all of his cast to make every bit of the film all that more poignant and powerful. Unfortunately, the same can't be said about The Nativity Story.

The film's centers on Mary as she's given the burden (and inevitable blessing) of carrying a child that isn't her husband's but is of God and she must live with the scorn from those who don't believe her. Played by fairly newcomer Keisha Castle-Hughes, Mary doesn't seem to have the presence or passion or even the faith of the Biblical version. Castle-Hughes's bland and wooden performance truly hurts the film from becoming a Christmas classic as her face barely breaks from a forced look of sheer intimidation and terror during the film's hour and forty minute duration. What saves her scenes from near complete loss is the surprisingly strong performance by Oscar Isaac, who outshines her in every scene they're in together with his genuine and humble outing as Joseph. The rest of the cast is okay at best, with always memorable Shohreh Aghdashloo doing her best with what she has as Elizabeth. Ciarán Hinds is especially ruthless as King Herod, but also isn't given much to do but just look really peeved in all of his scenes. And his son Antipas could probably have been played by a cardboard stand-in for an equally dismissable (if not insultingly bad) performance from Alessandro Giuggioli. Finally, the three wisemen are an interesting little side story as they're given all of the film's comic relief which is a mixed bag of funny and cheesy that ultimately all-around feels misplaced in this sort of film. With how serious it takes itself, the cheesy humor just makes it feel more like a poorly made Christian film at times than a big budget Hollywood production.

The Nativity Story is directed by Catherine Hardwicke, a production designer turned director who first tried her craft behind the camera in 2003 for the disturbing inside look at the lives of early-teenage girls in Thirteen. Since her directorial debut, Hardwicke's only other movie was last year's surfing/skateboarding flick Lords of Dogtown, making The Nativity Story only her third venture into the world of directing. What made Hardwicke choose such a film as the Christmas story to add to her list of projects is a bit of a puzzle, but there's little about the picture that feels like it is this director's labor of love. While the film has its moments, one can't help but watch it and know it could be and should be a lot better. 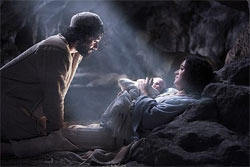 Aside from a standout performance from Oscar Isaac, The Nativity Story gets by on its mostly realistic portrayal of the times and detailed set pieces. Also, Mychael Danna's score for the film does the job, even smartly using subtle hints of classic carols like "Silent Night" or "Carol Of The Bells" at key moments in the film. And although some moments are a bit melodramatic at times, Hardwicke gives plenty of little insights into what the day to day may have been for these people in their time - from cheese making to seeding crops and paying taxes. If only Hardwicke had placed as much importance on acting as she did details like that, The Nativity Story may be in better shape.

The biggest surprise some may find with The Nativity Story is its leanings toward violent content. From off-screen infant killing to views of Jews hung dead on trees and dying on crosses, the attempt to make it as realistic as possible turns the original Christmas story into a much darker tale. These violent elements make the film a bit harder for families to share together and, although it may be more true to what things were like during Mary & Joseph's day, it doesn't make for very good family movie time.

Although flawed and above average at best, The Nativity Story is a decent telling of the birth of Christ but is also one that is rather forgettable. Whether or not the film will stand the test of time for repeat viewings around this time every year remains to be seen, I'm willing to go out on a limb and say that because it's not a better movie, it may only be worth one viewing at best. The Passion Of The Christ it is not, despite a few shining moments of the humanity of the Son of Man's parents and earthly family, The Nativity Story is a bit of a disappointment.

Alcohol/Drugs: Some people may be having wine as they eat at a dinner with King Herod's people.

Blood/Gore: There is a brief shot of a few dead men hung in a tree that look a bit bloody; We see some men hung on crosses but it isn't especially gory or bloody; Mary focuses in on Joseph's feet as he's walking and it appears that his heels might be a little bloody but when shown up close in the next scene, his feet are just dirty.

Violence: Herod's men go to Bethlehem to kill the first born and we see a drawn sword and what appears to be a dead infant (but no impact or blood/gore); A man's daughter is forcibly taken away by tax collectors when he can't pay up; A man is taken away by soldiers and we then briefly see some men hanging tied to crosses (to die); We see a cow that is about to be sacrificed with a knife motioned to kill it, but the scene ends before anything is shown. Disclaimer: All reviews are based solely on the opinions of the reviewer. Most reviews are rated on how the reviewer enjoyed the film overall, not exclusively on content. However, if the content really affects the reviewer's opinion and experience of the film, it will definitely affect the reviewer's overall rating.