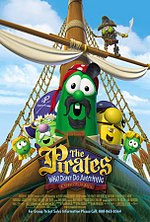 The Pirates Who Don't Do Anything - A VeggieTales Movie 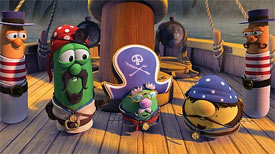 "The Pirates Who Don't Do Anything -- A VeggieTales Movie" opens in modern day suburbia at the local pirate themed restaurant, where derring-do and turkey legs go hand-in-hand five nights a week. But not for Sedgewick, Elliot and George (Mr. Lunt, Larry the Cucumber and Pa Grape). While they love all things piratical and dream of taking the stage in the big show, Elliot's timidity, Sedgewick's laziness and George's lack of self-confidence relegate them to busing tables and refilling drinks. When they finally do get up the courage to audition, the three would-be swashbucklers manage only to destroy half the stage set. Out of luck and out of work, they stand dejectedly outside the restaurant as a strange, ancient-looking metal ball lands at their feet. It is a "Helpseeker," sent from another time and place in search of heroes. After scanning the three moping misfits, it sets in motion events that will send them back to the 17th century to face real pirates in a real pirate adventure, and in the process challenge everything they believe about themselves... (from MovieWeb.com)

It was six years ago when VeggieTales got their first chance at the silver screen. Jonah: A VeggieTales Movie was a modest success at best, but an achievement for Christian cinema. While a follow-up film was originally planned to be centered around a story about how Bob and Larry first met, the news of a second feature-length film died down when Big Idea, Inc. went bankrupt. Reportedly, co-creator and writer Phil Vischer had come up with the idea for the next film, The Pirates Who Don't Do Anything, even before Disney found success with the 2003 film, Pirates Of The Caribbean, but his story wouldn't see the light of day until two more sequels from the Disney franchise would be released.

The Pirates Who Don't Do Anything - A VeggieTales Movie is a much different VeggieTales experience than before. We not only don't meet the characters of Bob and Larry - or any of the shows cast of characters - as themselves, but the story begins and ends with each Veggie starring as a different character for the story (and don't expect to see Jr. Asparagus, Laura The Carrot, or anything more than a couple of frames of Bob The Tomato). And this time, it's not at all a Biblical storytelling like Jonah was. The Pirates Who Don't Do Anything - A VeggieTales Movie relies wholly on its story to deliver a message that's relevant, yet subtle in its Christian thematics. 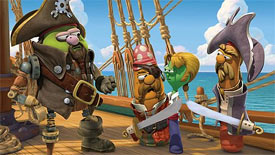 The Pirates Who Don't Do Anything opens in the 17th century, introduces us to several new characters, and sets up our plot where a damsel in distress needs a couple of heroes to save her and her brother. What inevitably happens is, instead of your expected stereotypical heroes, the likes of Larry (as Elliot), Pa Grape (as George), and Mr. Lunt (as Sedgewick) show up and must fight their urge to be lazy and decide to pitch in. What unfolds is a clever little story with enough fun included to keep us entertained for its duration. In recent years, VeggieTales has found some of its most golden moments in spoofing popular stories - from Indiana Jones to Lord Of the Rings and The Wizard Of Oz. Surprisingly, there isn't a single reference in this particular pirates story to Pirates Of The Caribbean, which can be good in the sense that it relies on its own footing, but in some respects also feels like there are a few missed opportunities. VeggieTales has often succeeded more greatly when spoofing (or retelling a known Bible story) than when trying to come up with an original story, and some of this is felt in The Pirates Who Don't Do Anything.

One of the strangest observations I struggle to admit is that there are more than just a couple similarities in the events of The Pirates Who Don't Do Anything to that of the 1998 sci-fi comedy Galaxy Quest. In the latter, a group of actors are mistaken by aliens in distress for heroes and must band together to rescue them from an oppressing villain. In that story, there is a prominent sequence with a rock monster, a race of little creepy creatures that chase one of our heroes, and a scene where - in a tight spot - the heroes try to convince the story's villain that they're nothing more than just actors mistaken for something more (and I won't even go into one of the final scenes which also is uncannily similar... but just replace the fan convention with a dinner theater here). In The Pirates Who Don't Do Anything, all of those elements can be found, with the race of aliens replaced by the hilariously disturbing race of vicious little cheese curls. Whether or not these similarities between the two stories is intentional, it's surprising that a list of such comparisons can even be made between such visibly different films. 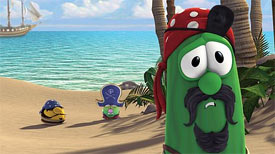 Content is obviously mild being that the film is rated G, but parents will want to keep in mind a few instances that are likely to be pretty intense for their younger ones. The aforementioned cheese curls are ridiculously creepy and the scene where they're revealed and chase one of the veggies through a dark cave (and show up a couple times throughout the rest of the film, including the end credits), are possibly a bit unsettling. It's only during the end credit silly song where they're shown dancing (much like the screeching slugs in Flushed Away) that they seem more harmless. Also, there's some swashbuckling and a couple appearances by a mechanical sea monster that could scare some little kids, but nothing is ever lethal or grotesque. As usual, VeggieTales keeps things pretty light even when it seems a bit ominous.

Overall, it's one of the more impressive looking VeggieTales productions, but it still can't hold a candle to such those by DreamWorks or Pixar. Even though it's clear this film is geared towards youngsters and families - more so than even the ones from the mentioned film companies - it's tough not to admit that not only has Big Idea done better in the past, but there have been much, much more impressive and entertaining feature-length animated films for families before (last year's G-rated Ratatouille even comes to mind). Although there's no blatant Biblical message, the moral of the story is a bold one about "the King" (an obvious reference to God) choosing the least likely heroes to do his will and get the job done. In the end, The Pirates Who Don't Do Anything - A VeggieTales Movie remains an encouraging, family-friendly film with a positive message about being able to achieve great things even when the circumstances seem way out of our qualifications to handle. While the film could have been stronger (and a bit funnier), the VeggieTales charm is still present and fans of the series shouldn't be disappointed in their latest theatrical storytelling.

Violence: Some nonlethal swordfighting, Robert holds a sword to Alexander; Robert's men put a dummy on a boat and sail it into a water mine to show what he hopes to do to the King, A cannonball ricochets off a rock and hits a boat sail which knocks a man off a boat and causes the ship to crash into the rocks; A ship fires on a rowboat with cannons; Evil cheese curls chase a veggie around; A chandelier knocks over a character; Elliot is eaten by a visibly mechanical sea monster. We then see him cut a hole in the neck of it and poke his head out; (and other minor, nonlethal cartoony violence) Disclaimer: All reviews are based solely on the opinions of the reviewer. Most reviews are rated on how the reviewer enjoyed the film overall, not exclusively on content. However, if the content really affects the reviewer's opinion and experience of the film, it will definitely affect the reviewer's overall rating.