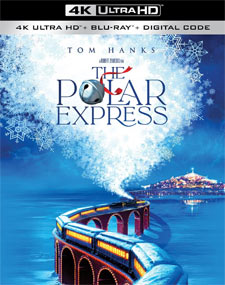 When a doubting young boy takes an extraordinary train ride to the North Pole, he embarks on a journey of self-discovery that shows him that the wonder of life never fades for those who believe. Combining classic storytelling with cutting-edge filmmaking, The Polar Express debuts a highly advanced version of motion capture technology developed and tailored to meet Zemeckis' uncompromising vision and is the first feature ever to be shot entirely in this format. (from PolarExpressMovie.com)

The Polar Express isn't your usual animated film. Using motion capture technology like what was used for creating Gollum in the Lord Of The Rings films, director Robert Zemeckis brings to life this children's story on the big screen. The end result is a mixture of failures and triumphs.

The animation in Polar Express opts for a more realistic approach to rendering the characters. While in some moments they look more cartoony than in others, the overall feel of the film gives off this creepy, almost ghostly aura. The fact that they're supposed to resemble real people yet have hollow and often empty eyes gives the movie a sort of video game cutscene vibe. The movie works best at a distance, when the camera is pulled back from the action and we see less detail in their faces. At the same time, the action involving the train and the North Pole is breathtaking to say the least. One of the most memorable sequences sees the train sliding across the ice as the camera swoops in from a distance. The train glides in our direction and we're whisked right through the train to its engineer's grip on the brake.

The story is a fun fantasy about kids who are starting to question the reality of Santa Claus being given a free ride on a train to the North Pole to see him. While it focuses primarily on the secular side of the holiday, it's a benign and charming little tale. The film, which honestly surprised me to be just rated G, does include a few moments that may be a little too intense for the younger audiences. A hobo on top of the train is rather ominous at times, while "Hero Boy's" encounter with a puppet is the film's creepiest moment. The movie also chugs along a little too slow in some sequences, dragging down the pacing too much at times.

The voice talents in The Polar Express all work nicely, with the exception of -- believe it or not -- Santa Claus. The film paints him a little too serious and almost a little too god-like, complete with a deep and intimidating voice that is merely an eerily altered version of Tom Hanks' voice. Otherwise, Hanks does a fabulous job as the train's Conductor and the Boy's Father, and even The Hobo. Hanks' Bosom Buddies co-star from his breakout TV role, Peter Scolari, makes a surprise appearance acting out Lonely Boy, a young child who has never had a true family Christmas. It's interesting to note that all of the children were acted out by adults (with motion capture), yet voiced by children. But it does surprise me that Zemeckis and his team didn't aim for more varied voice talents as the use of Hanks in four key roles kind of gives the film a somewhat cheapened feel (i.e. couldn't they afford more voice actors?).

Another strike against the film is the character "Know-It-All." A bratty kid with a nasally voice perfect for grating on the nerves of even the most patient, Know-It-All is humorous in his first few moments but downright intrusive when given more screentime towards the end of the film. All faults aside, however, The Polar Express has enough charm to keep its engines running and enough eye candy to keep our attention. It's just, with a little tweaking here and there, a faster pace, and maybe less realistic (and creepy) looking characters, the film could have been a lot stronger.

Overall, The Polar Express may be your best bet for a Christmas film this year. This brand of animation looks like it still needs some work, but it looks like the filmmakers may have something significant on their hands if wielded correctly and developed to its full potential. Regardless, round up the family and feel good about taking them on this fantasy-based train ride.


Ah, The Polar Express. It's been 18 years since the film hit theaters, and computer animation has certainly come quite a long way since then (particularly motion capture technology). In all honesty, The Polar Express was never one of my favorite Christmas movies. And trying to revisit it for this review proved to be more painful than I expected it to be. (It didn't help that I watched this brilliant Pitch Meeting video shortly before trying to watch it again, and it highlights everything wrong with this movie!). Even in 4K, the movie lacks visually. Its soft look is crisper in UHD, but the animation -- mainly for the humans -- is just really weak. The humans are just plain awkward in most scenes, and are lacking life. Their animation largely feels unfinished. Director Robert Zemeckis' direction and camera angles are definitely intriguing; if there's one thing the movie has going for it, it's creative vantage points within the storytelling. But I think the limits of the technology in 2004 held this movie back from being a lot better. The fact that Tom Hanks performs and voices several of the main characters makes the movie feel a lot "smaller," though. In the end, it's hard to believe this was a big Hollywood feature film. It just feels like a direct-to-video, low budget project. Finally, that irritating character Know-It-All really, really damages the film. I have no clue what Zemeckis was thinking.

In the end, if you're a fan of The Polar Express, my gripes are worth dismissing. For fans, I'm not sure how much this 4K UHD presentation will bring to the movie. It's probably a little sharper than the Blu-Ray, but the animation quality doesn't exactly warrant the 4K treatment. So, in the end, I'm not sure it's worth the upgrade if you have the HD release of the movie already.

Violence: The train gets derailed on the ice and loses control, but nothing bad happens. The conductor pulls on the train engineer's beard that makes him yell several times. Disclaimer: All reviews are based solely on the opinions of the reviewer. Most reviews are rated on how the reviewer enjoyed the film overall, not exclusively on content. However, if the content really affects the reviewer's opinion and experience of the film, it will definitely affect the reviewer's overall rating.