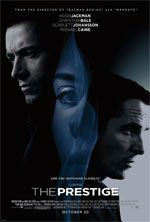 - for violence and disturbing images. 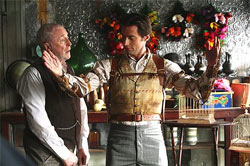 From acclaimed filmmaker Christopher Nolan (Memento, Batman Begins) comes an innovative thriller woven out of the stuff of illusions. In this twisting, turning tale of urgent mystery, two Victorian-era magicians spark a powerful rivalry that builds into an escalating battle of tricks and an unquenchable thirst to uncover the other's trade secrets. As these two remarkable men pit daring against desire, showmanship against science and ambition against friendship, the results are dangerous, deadly and definitely deceptive. (from MovieWeb.com)

The Illusionist proved this Summer that magic and illusions (in the "trick," not spiritual sense) can make for great subject matter for a film. The Prestige is no different. However, they're completely different movies whose similarities end with the fact that they both focus on magicians and the art of performing magic tricks.

Christopher Nolan returns to his spot behind the camera to deliver yet another nail-biting thriller with enough twists and turns to take the film well above average results. Nolan won me over when I first viewed an edited version of his creative thriller Memento. That film was a puzzle, playing backwards as it told the story of a man with a short-term memory condition who is trying to find his wife's killer. Nolan took the viewer through the same short-term memory experience the lead character was experiencing, tying it all together by the film's end when its truth is revealed at its story's beginning. Nolan followed up Memento with the dramatic thriller Insomnia and the comic book actioner Batman Begins (also starring Christian Bale). The Prestige returns Nolan to the kind of nontraditional puzzle-piece format as Memento as it deters from the usual linear storytelling to jump from past to story's present to flashbacks within flashbacks and back again. One might expect this to be a jumbled mess, but it turns out to be one well-thought out, well-scripted, well-acted masterpiece.

The Prestige is one of those mentally-engaging, emotional films that leave you feeling like you've just run a triathalon upon leaving the theater. But it's that kind of complexity that, by the time the credits roll and all has been revealed to the audience, you feel satisfied. Nolan ties up every single significant loose end by the film's conclusion, while still leaving plenty to talk about with fellow viewers for weeks after. The Prestige isn't your blockbusting popcorn flick, actually requiring close attention to detail from the audience. The movie opens with the words of Christian Bale's Alfred Borden asking if we're watching closely. And we find that Nolan has given little clues and little hints to the tricks of The Prestige that all work together as a whole. At about halfway through the movie, I figured out one of the plot elements that lends to the twist but isn't the film's grand revelation, and I felt cheated. I almost never figure out stuff like that ahead of time, so I was surprised so many clues alluding to my discoveries were left by Nolan. But as any good magic trick does, I was moreso looking at Nolan's right hand while the other was doing the trick as he concealed his own prestige within The Prestige.

The acting is what helps carry home this tale of obsession and revenge. Hugh Jackman is perfect as the distinguished and spoiled Rupert Angier. From the beginning, you're drawn in by the pain Angier goes through upon experiencing a great loss, but soon his remorse gives way to hatred and resentment, and eventually complete obsession. Bale's Alfred Borden is slightly more complex as we're sort of trying to figure out who he really is as the story progresses. The two battle it out on and off the stage, doing truly heinous things to each other and the people they care about. It escalates so much even that you find both characters are without merit, which may be the only real drawback to this kind of story. Michael Caine rounds out the film's central trio who adds plenty of warmth and charm through his character of Cutter, who never loses his sense of humanity while the other two virtually lose all control. 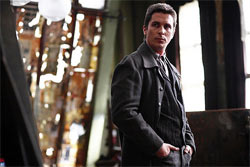 With such a plot viewed through such a dark lens of sorts, the content is rather heavy and often disturbing or unsettling. The worst comes in the form of a character losing two fingers when they're shot off, and we see the discolored wound a couple times a few days later. Also, while neither bloody nor gory, we do see characters being hung or having hung themself (with the latter seen dangling for a prolonged shot), and shots of people drowning on more than one occasion. The film is as dark as the men's hearts turn out to be and it's clear this film isn't for everyone. I don't know how, given the plot Nolan has setup for us, it could have been toned down better, but I'd hoped for a bit of a lighter, less violent film.

Overall, I thought The Prestige was as good as I had hoped to be, delivering a cerebral, taught thriller with plenty to think about in and out of the theater. There are so many clues and tricks within the film's plot for the audience to eat up and ponder that it ends up being a rewarding experience for those looking for something with more substance than they're used to finding from the Summer movie fare. But be warned, it's a truly dark film that examines some of the worst the flesh of man can reveal. It's hardly a film for the young ones and even one to consider discretion for with anyone interested in seeing it. Wonderfully made and smartly told, the film could only have been improved through a lighter storytelling with less violence and intensity than was used, and the inclusion of more reputable and likeable central characters.

Sex/Nudity: We see Angier and his wife in their room as they talk and playfully kiss (he's shirtless, she's clothed). They lie back on the bed together, but the scene ends there; We find out that Borden has been cheating on Sarah with Olivia, but we never see them do anything

Alcohol/Drugs: People are seen drinking socially and Borden appears drunk in one scene; A man hired to work with Angier is seen drunk on more than one occasion

Blood/Gore: We see a woman struggling to get free while drowning in a box and then slowly drown before she's freed; A man's hand is shot and we briefly see some blood on their hands as they hold the wound and scream; We briefly see the discolored gunshot wound a few days later (and again in another flashback); We see a man in the process of drowning inside a tank on a few occasions (we later see their non-gory, but bluish in color dead body on a morgue table); We see the carcass of a crushed, dead bird following a magic trick; A man falls through a trap door and lands on the ground, breaking his leg (not bloody or gory, but we hear the crack); A man is shot suddenly and we see some blood squirt out; A man is hung and we hear the crack of his neck as he falls

Violence: We see people drowning in a water tank on more than one occasion; A woman hangs herself and we see a prolonged shot of her body slumped over and hanging from a rafter; We see a man who is hung after sentencing; A man's fingers are shot off; A man takes a carpenter's chisel to another man's hand to remove two of their fingers (we don't see the act, but do hear the sound and the victim screaming. the scene is very brief); A man is shot and killed (on two different occasions); A man is trapped alive in a coffin and shoots through the door, injuring a man outside the box in the arm; A man falls and breaks his leg; A bird is crushed during a disappearing magic trick; We see a brief shot of a dead body in water Disclaimer: All reviews are based solely on the opinions of the reviewer. Most reviews are rated on how the reviewer enjoyed the film overall, not exclusively on content. However, if the content really affects the reviewer's opinion and experience of the film, it will definitely affect the reviewer's overall rating.