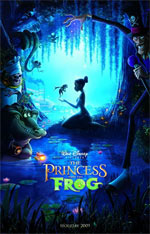 The Princess and the Frog

Walt Disney Animation Studios presents the musical "The Princess and the Frog," an animated comedy set in the great city of New Orleans. From the creators of "The Little Mermaid" and "Aladdin" comes a modern twist on a classic tale, featuring a beautiful girl named Tiana (Anika Noni Rose), a frog prince who desperately wants to be human again, and a fateful kiss that leads them both on a hilarious adventure through the mystical bayous of Louisiana. (from MovieWeb.com)

Last year, Disney returned to hand-drawn animation, after a 5-year hiatus, with The Princess and the Frog. From the first animation cel, it's obvious that this project was a labor of love from Disney animators who first got into the business due to a love for 2D animation. With the success of Pixar's computer animated projects and its successors, CGI animation has, sadly, made hand-drawn work a thing of the past. But Disney hopes to bring it back, starting first with The Princess and the Frog.

The Princess and the Frog, from the get-go, has the look and feel of classic Disney animation, but with a bit of a supersized feel. While it's touted as a return to hand-drawn animation, it's obvious that some effects are still rendered with a computer, but the characters and the heart still remain hand-crafted. And in the end, we have a modernized classic... Disney style! Set in New Orleans in the USA instead of a far away distant land, our heroine, Tiana, is an American working girl hoping to make a name for her family and unite the people in her city by owning her own restaurant someday. However, when a prince from Maldonia shows up in New Orleans, Tiana's friend Charlotte hopes to snag his hand in marriage. But local Shadow Man, Dr. Facilier, entices the broke prince and his assistant to agree to accept the villain's help in turn for riches and prosperity. What results is prince Naveen becoming a frog, while his assistant becomes the prince, giving Facilier prime opportunity to have a puppet rise to power in New Orleans. The story is filled with humor and fairytale elements, but the grounding in reality - a New Orleans setting - makes its villain's background in Voodoo a little unnerving. All the "magical" elements in The Princess and the Frog are because of Shadow Man's Voodoo dabblings with "the other side," and quite a few truly creepy scenes are born out of this.

And really, the only significant problem with The Princess and the Frog lies in the "Louisiana Voodoo" elements. While the black magic of the Shadow Man paints the Voodoo practices in a negative light, a sort of "fairy godmother" found through a 197 year old Voodoo practicing woman named Mama Odie is more like the white witch of the story (she even wears white, while Facilier wears black). And while the story doesn't come out and tell kids to practice "good" Voodoo, it's a little weird to be watching a fairytale that brings a real pagan belief system into its story. Perhaps I'm just more sensitive to this kind of thing as an adult Christian rather than just a child watching a cartoon story, but both my wife and I were a little unsettled by this plot point that we were not aware of going into watching the movie. And throughout the story, we see Voodoo dolls (and one is almost used, apparently to kill an innocent character), a shrunken head, and African tribal Voodoo masks, as well as evil shadow spirits. It all adds up to some intense imagery, the most creepiest being impish, fang-drawn shadows that are likely to scare the socks off of the younger audiences. On the other hand, none of the film's heroes practice Voodoo or act like they intend to at some point - other than having a sort of Wizard Of Oz hope that Mama Odie could help them out of their troubles in the same way that The Wizard would be able to help out Dorothy and the gang.

Aside from the Louisiana Voodoo plot point, the actual story of The Princess and the Frog is a creative and fun one. The voice talents across the board are fantastic, while the mix of CGI elements and hand-drawn characters is a real wonder to behold. I didn't catch the film in the theaters, but instead saw it first on blu-ray, and it certainly looks gorgeous in this medium. The colors are vibrant and the animation is crisp. The directors - who also brought us Aladdin and The Little Mermaid - know how to put together an all-star animation team, and you don't have to watch the behind-the-scenes special features to be able to tell that those working on the film love what they do and believe in this art form. In fact, you can almost get the feeling just by watching the movie that the filmmakers are setting out to prove that there is still a desire and market for hand-drawn works. And The Princess and the Frog successfully proves it through its execution. The film also brings back the Disney musical format and the songs chosen are rather fun. This story isn't specifically for kids OR girls and the songs help bring a sort of Americana nostalgia to the film too. From ragtime to jazz to even gospel, there's an array of musical flavors incorporated into this story. I couldn't help but think of the sadly-banned 1946 Disney film Song of the South that I saw as a kid while watching this one. However, while that movie was banned due to racial stereotypes (which I don't believe were ill-intended), this film safely avoids any of those stereotypes and, in fact, does a great job uniting the different cultures.

Overall, I was impressed with the quality and end result of The Princess and the Frog. It's a great Disney fairytale, although parents might want to screen it first to check out the Louisiana Voodoo content for themselves. Also, the shadow spirits make for multiple frightening and eerie scenes, so don't let the G rating lure you into a false sense of security (it probably should have at least been PG for "thematic elements" or "scary images"). There are plenty of intense moments to take into consideration here. Otherwise, the rest of the story is a fun fairytale that encourages its audience to dream and pursue those dreams to fruition. Hopefully this marks an unending return to hand-drawn animation from the Disney Studio! 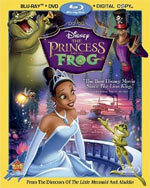 There are quite a few goodies included on the blu-ray release of The Princess and the Frog. For starters, there are two versions released on blu-ray -- one is a single disc version, while the other is a combo that also includes a regular DVD and a digital download copy of the film (the latter of which is clearly the better buy). The blu-ray disc offers the most extra goodies. Besides a brilliant picture for the feature film, the bonus featurettes dive into the making of the animated movie.

The most comprehensive featurette is "The Making Of A Princess," which takes a look at Disney's return to hand-drawn animation, the story of The Princess and the Frog, and some of the voice actors (especially Anika, who voices Tiana). The subsequent featurettes dive a little bit deeper into the villain, our newest princess, and the music behind the film. We're treated to lots of insight into the progression of the hand-drawn animation as well as some of the history of animation at Disney (including old photos of the original "Nine Old Men" who were the very first Disney animators!). The only thing I thought was missing was a little bit more interaction with the voice actors. But I'm, admittedly, a stickler for that. I love to get to know more about who voiced what characters and to hear them talk about their roles. I was pleased to see a little bit of Disney voice actor Jim Cummings talk about his role as firefly Ray, since Cummings has voiced characters in some of my favorite Disney cartoons of the 80s and 90s, including TaleSpin and Darkwing Duck. Unfortunately, it was exceptionally brief, but I was happy to see him in the flesh for a change.

One of the most intriguing featurettes is "Bringing Life To Animation," which places live action reference footage, involving real actors acting out scenes to give the animators something to work with, side by side with the finished footage from the movie. Two scenes (including a musical number) are featured and it's just enough to be satisfying without losing the viewer's interest. And if the behind-the-scenes insights weren't enough for you, there's a feature-long version of the movie that allows you to view The Princess and the Frog with a picture-in-picture look at the rough sketches and pencil work on top of the finished product. Of course, this does take away the ability to see part of the actual movie since the rough work is literally shown in the upper corner on top of the feature film, but those familiar enough with the movie already will especially enjoy this bonus nugget. And it's the kind of thing animation buffs will love.

All in all, Disney does a great job bringing home their return to hand-drawn animation to fans of the film company. Blu-ray is still the ultimate home viewing experience and Disney's home video release of The Princess and the Frog looks especially great in high definition.

Sex/Nudity: Charlotte shows some cleavage in her dress, as does Tiana a little bit. In one instance, Charlotte quickly pulls up the top of her dress (adjusting herself), showing a little extra cleavage; As frogs, Tiana and Naveen accidentally lock tongues while trying to catch a bug. They then get intertwined really badly and a firefly comes along and jokes that the two got a bit carried away

Alcohol/Drugs: There are people drinking wine at a party. We see a guy in an octopus costume with each arm holding a glass of wine. He's visibly drunk and when the alligator runs by, he thinks it's because of his drinking and pours out the wine

Blood/Gore: A small African mask talisman is briefly show cutting human Naveen's finger and we see a drop of blood on his finger for a second. The amulet is then seen with outlines of red in it at different times throughout the film; Dr. Facilier briefly holds up a shrunken head; In Mama Odie's place, we see a jar with eyeballs floating in it, along with another jar with a set of teeth (like dentures) floating in it; A hunter in the bayou is called "Two Fingers" because he only has two fingers on his right hand (the rest of his hand is wrapped up to make it less obvious or gross)

Violence: Naveen is tied up, his finger is sliced, and then turned into a frog; We see shrunken heads and such at Dr. Facilier's place; Three goofy hunters hit each other on the head with logs and fire their shotguns at each other, as well as our animal heroes. One accidentally shoots another in the crotch and we see his heart-shape designed underwear through his torn pants; After the three unintentionally beat each other up, we see one with huge lumps on his face; A man steps on a frog's tongue; SPOILERS! We see a man dragged away by even spirits into a mask-like opening which, when it disappears, reveals a tomb for that person; A man steps on a bug which leads to its death (but it allows him to be with the one he loves)