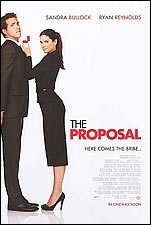 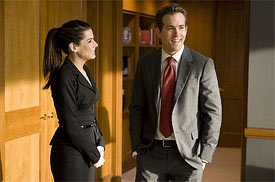 When high-powered book editor Margaret (Sandra Bullock) faces deportation to her native Canada, the quick-thinking exec declares that she's actually engaged to her unsuspecting put-upon assistant Andrew (Ryan Reynolds), who she's tormented for years. He agrees to participate in the charade, but with a few conditions of his own. The unlikely couple heads to Alaska to meet his quirky family (Mary Steenburgen, Craig T. Nelson, Betty White) and the always-in-control city girl finds herself in one comedic fish-out-of-water situation after another. With an impromptu wedding in the works and an immigration official on their tails, Margaret and Andrew reluctantly vow to stick to the plan despite the precarious consequences. (from MovieWeb.com)

I have to admit, I don't mind a good romantic comedy (I should emphasize "good" in that statement). I often enjoy the ones that offer a unique premise, likable characters, plenty of humor, and a touch of romance. Even better are the ones that don't make it look like the clincher to being in love is having sex and don't include a scene afterwards where one person confesses their love to the other followed by complete surprise at that revelation (Oh Hollywood, how skewed your perception and demoralized your representation of love really is). The latest romantic comedy to grace the silver screen is entitled The Proposal, and features Sandra Bullock making her return to the genre.

In The Proposal, Bullock's love interest is wise guy Ryan Reynolds, which may seem like a bit of an age gap with Reynolds being 32 and Bullock being 44, but it somehow works relatively well, regardless. The film's premise centers on a New York City book publishing editor-in-chief (Bullock as Margaret) who forces her male assistant (Reynolds as Drew) to agree to marry her to save both of their jobs after she is threatened to be deported back to Canada. The immigration office starts to question the validity of the relationship and the two spend that weekend with Drew's family in Alaska. For a good portion of the movie, I found myself wanting to find a reason to like Margaret, but due to her callous ways and abrasive personality, it seemed almost impossible to warm up to her. But by the time she starts to show signs of humanity, I couldn't help but look forward to seeing these two start to fall for each other. 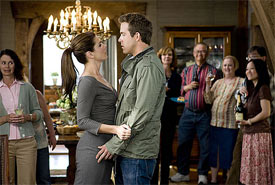 I don't know if this deserves a spoiler warning, but this paragraph will talk a little more in-depth about the way the movie handles their relationship development. The awkward family experiences taking place off in a wilderness cabin for a weekend reminded me a lot of Dan In Real Life (but much more light-hearted this time around), while the mismatched unlikely relationship kind of seemed like a You've Got Mail or even Just Like Heaven kind of concept. The problem is, the film seemed to spend more time showing us just why they don't belong together than why they do. In fact, we don't see many redeeming qualities about Margaret until the weekend is almost over. And by that time, it just seems all too quickly that they realize they love each other and want to spend the rest of their lives together. One of the best scenes does involve Margaret letting her guard down and opening up to Drew, but there didn't seem to be enough of that barrier-breaking to make the romance feel believable. It's hard to swallow that these two worked together closely for three years, with him sucking up to her to try to move up in his job, while she walked all over him and appeared as cold as ice to everyone who came in contact with her. How does one secluded weekend reveal a sort of undying love all of a sudden?

Nitpicking aside, the bickering between Reynolds and Bullock and their sort of personal war between the two of them help make The Proposal entertaining and fun. If it had taken itself too seriously, it would feel more masochistic to watch a film about two people hating on each other for half the film, but Anne Fletcher (27 Dresses, Step Up) directs the film in a light and fun enough way to make the awkwardness and tension bearable. By the time we realize why Margaret is the way she is, we come to genuinely feel for her and start to like her along with Drew, even if it is a bit contrived. But the other downside is, not to burst anyone's spoiler bubble once again, but The Proposal adheres quite faithfully to that romantic comedy formula, making the ending a bit too theatrically "perfect" in only the way these romantic comedies can really do (ah yes, the "dramatic chasing after the escaping partner once it suddenly all falls apart" climax seems inescapable). While I can't say I'd know a better way to wrap up the movie, it's just unfortunate it has to travel into predictable territory like so many other films before it. 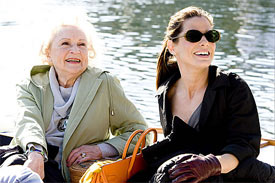 The content in The Proposal does raise a few caution flags. While thankfully there is no on-screen or even implied sexual encounters, there is in fact some nudity. In one sequence, Margaret gets out of the shower and can't find a towel, only a handcloth, so she puts the handcloth over her crotch and her arm across her chest and we see her otherwise entirely nude as she tries to ward off a small dog barking at her on her way to grab a towel. Drew walks in, listening to music on his headphones and doesn't hear Margaret's struggles with the dog (and doesn't see her), and strips down to go take a shower. At one point, when they both turn around, the two smack into each other and we see full body shots of both totally naked from the side (pressed against each other) as they collide and fall on the floor. Drew quickly covers himself up and Margaret grabs covers from the bed. Although it's not an erotic scene by any means, it's something parents will want to take note of. There is also some sexually related dialog here and there, but nothing especially explicit or vulgar. Still it's all done in a more adult fashion (this isn't a movie for kids or teens). Lastly, there's some profanity, including a pair of "s" words (the first one is actually the first word said in the movie, oddly enough) and a couple uses of blasphemy, as well as a handful of uses of "the 'a' word," "b*tch," and "h*ll." And there's a somewhat awkward scene (well, I found it awkward), that although played for laughs, features Drew's Grandmother performing a sort of Indian chant/dance around a campfire in the woods, praising and worshipping "Mother Nature." It's a somewhat stupid and goofy scene, which soon proves to be a tool for a funny gag involving Bullock being forced to dance along, but it felt over-the-top for even a movie of this kind of premise and sorely out of place.

Despite its various flaws, I actually really enjoyed The Proposal as a whole. Perhaps because I could probably see this premise having been used in an old classic film, or because I enjoyed the pairing of Reynolds and Bullock (and there wasn't enough downer material to ruin the overall upbeat feel of the movie), but I usually find myself enjoying romantic comedies that actually deliver just that (Also, seeing Oscar Nuñez from TV's The Office in a really outrageous and funny role here was actually quite a treat). Maybe a TV edit might trim off the fat that is the more offensive material, so you may want to just wait to see it until then, but adults looking for some lighthearted material with a romantic buzz just might enjoy The Proposal.

Sex/Nudity: A joke is made about Margaret's male boss having had an affair with his male secretary; Drew puts his hand on Margaret's butt as she slowly makes her way down a ladder (to which she yells at him for); While hugging (to make it look like they're being affectionate), Drew puts his hand on Margaret's butt, to which she threatens him that if he ever does that again, she'll cut his "balls off;" Grandma Annie gives the two a blanket to sleep with that she calls the "Baby maker." Margaret asks for separate rooms for them to sleep in and Drew's mom makes a comment that she assumes they already sleep together; Drew's family takes Margaret out for a surprise and it turns out to be a bar where Ramone happens to be "the only exotic dancer on the island." He then strips down to just a tiny bathing suit and does suggestive dances around the stage and in front of Margaret. Grandma Annie encourages her to smack his butt and she reluctantly does so (The whole scene is played for laughs, not eroticism); Margaret gets out of the shower and can't find a towel, only a handcloth (we briefly see her front topless in the mirror with her hair covering her chest). She puts the handcloth over her crotch and her arm across her chest and we see her otherwise entirely nude as she tries to ward off a small dog barking at her on her way to grab a towel. Drew walks in, listening to music on his headphones and doesn't hear Margaret's struggles with the dog (and doesn't see her), and strips down to go take a shower. When they both turn around, the two smack into each other and we see full body shots of both totally naked from the side as they fall on the floor. Drew quickly covers himself up and Margaret grabs covers from the bed; Margaret comments to Drew that she hasn't slept with a man in a year and a half, among other things. Drew then repeats that in astonishment; Grandma Annie dresses Margaret in an old wedding dress which sags around Margaret's chest. She makes a big deal about trying to find Margaret's bust line in the dress and admits she was "knocked up" when she got married and first wore that dress; Margaret finds Grandma Annie doing a native chant and dance around a fire in the forest and Annie makes her join in. Margaret gets lost in the chant and starts dancing like someone might in a club, singing a rap song that repeatedly uses the words "*ss" and "b*tches" (played for laughs); While being interviewed for a marriage license, Drew is asked what position they lay in during sex (top or bottom). Drew skirts the question (either because he didn't want to answer or they hadn't slept together yet). Margaret is asked the same question but they don't really show her answer.

Alcohol/Drugs: Some characters casually drink drinks during party scenes and a bar scene