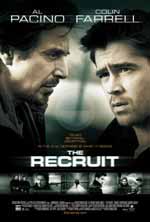 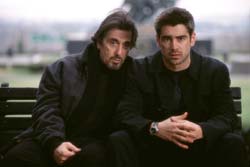 James Clayton (Colin Farrell) might not have the attitude of a typical recruit, but he is one of the smartest graduating seniors in the country -- and he's just the person that Walter Burke (Al Pacino) wants in the CIA. James regards the CIA's missions as an intriguing alternative to an ordinary life, but before he comes an Ops Officer, James has to survive the Agency's secret training ground, where green recruits are molded into seasoned veterans. But just when James starts to question his role and his cat-and-mouse relationship with his mentor, Burke taps him for a special assignment to root out a mole.

Before a movie begins in a theater, the audience is often subject to watching coming attraction 2-minute "trailers" for new films on the horizon. It's often a shared joke among moviegoers that when you see a detailed trailer that you've "seen the whole movie already." Well, if you've been to the movies anytime in the last few months of 2002 or January of 2003, chances are you've seen the trailer for the new spy thriller The Recruit. And in that case, you have seen the whole movie...

I could spend the next several paragraphs venting my frustrations on the geniuses behind splicing together and editing trailers for films to whet the appetite of the movie fans. I can go on and on about how they mess up a potentially good film by giving away the twists and surprises that film has to offer by hinting at them in the trailer or just plain giving it away wrapped in paper complete with a ribbon and a bow. But I won't waste your time and I don't feel like wasting mine. It's futile. Anyway, The Recruit is the latest offering from the director of junk like Species and the briefly enjoyable Dante's Peak. The Recruit has a lot of faults but a couple things going for it. You've got the amazing and magnetic acting talents of the great-and-usually-vulgar Al Pacino teamed up with the up-and-coming-Irish-pretty-boy Colin Farrell. What results is a series of excellent sequences involving the two and a paced suspenseful thriller that you're either gonna love or you're gonna despise. The Recruit has all the potential to be a brainy "what in the world is going on?!" spy thriller --

and does have its moments -- but if you've seen the trailer, you know what's going to happen and if not you'll probably figure it out shortly into the movie. This will be a huge problem for some, while others, like myself, will still manage to enjoy themselves watching the pairing of rough-and-tough Pacino with the young-and-much-to-learn Farrell (well, his character does). See, the thing is, the movie could have been a lot better than it is, but it still ends up being a pretty good flick regardless.

Content-wise we're offered a fair share of violence with minimal blood (wit the exception of a squirmy shot of a man pulling a piece of class from a wound on his forehead) a moderate amount of sexual content (some related dialog, two partial encounters), and a handful of swearing (a mix including 1 "f" word). The sexually-related dialog was rather stupid and unnecessary as well as the brief sexual encounters. Content could have overall been a lot worse but it could have certainly been a lot better too. However it's just enough to keep me from recommending it.

So with that, I did enjoy the movie for the most part, but it wasn't exactly the best film of the year. It had plenty of faults in its content and delivery, but still featured solid and worthy performances from Pacino and Farrell (Bridget Moynahan was also great as the female interest). So you can wait till it's cleaned up a little on TV or skip it all together. The decision's up to you.

Sex/Nudity: Some dialog-related instances. Layla makes a comment to James about having casual sex but not feeling up to it. Later, James asks her at a lie detector test if that was true. The two passionately kiss behind a pole in a parking garage and later we see them at her place removing their shirts (we see her in her bra) and they fall down on the bed but the scene ends there (sex is implied). We see them in the morning with her just wearing a shirt. Later we see them passionately kiss standing up which cuts to them in bed again and him on top of her under the covers quickly rolling off (implying they had sex again).

Alcohol/Drugs: Some people have drinks during the film; Layla is drunk in one scene; James gets drunk in another scene

Blood/Gore: A man has some blood on the side of his coat after being shot there (but it's dark and not detailed). A man crashes his head through a window and causes a bloody wound on his forehead; we then see a piece of glass sticking from it which he then pulls out (pretty gross). In another scene, we see James with 2 bloody cuts on the side of his face. We briefly see some blood on a man as he's being shot.

Violence: Moderate. Among the blood/gore stuff, we see a character gets captured and tortured (beaten/punched and electrocuted -- the latter we don't see); a car drives recklessly and runs another car off the road; a person is shot to death, etc. Disclaimer: All reviews are based solely on the opinions of the reviewer. Most reviews are rated on how the reviewer enjoyed the film overall, not exclusively on content. However, if the content really affects the reviewer's opinion and experience of the film, it will definitely affect the reviewer's overall rating.